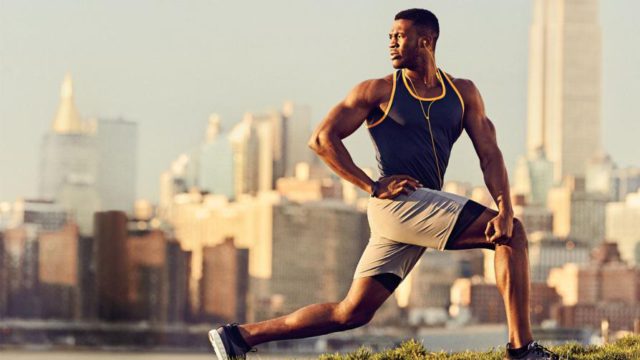 GETTING LEAN MEANS scoring your body fat to reveal that carved body. But the first question of eating to get lean: Do you want to lose fat or build muscle? Because you can’t do both—or at least not do each very well, says Marc Perry, C.S.C.S., trainer and founder of BuiltLean. “It’s entirely possible that you can build some muscle while losing fat, but you will unquestionably get better results by focusing on just one outcome at a time,” he explains.

You probably already have a good bit of muscle. After all, you hit the gym on a regular basis. It’s just that pesky layer of fat keeping you from revealing it all, right?

Okay, so you’re aboard the fat loss train. Here’s your express route to get to being lean.

This advice is almost as hard to stomach as being told to ditch the booze (you know that one’s coming). “The primary challenge men face to get lean is consistently eating fewer calories than they burn,” says Perry. Unfortunately, eating moderately well or even “healthy” isn’t going to cut it if you want to lose lbs.

How many calories are we talking about cutting down to? Multiply your current bodyweight in pounds by 10—that’s the healthy calorie deficit for most moderately active guys, Perry says. If you’re highly active but trying to shed lbs (to PR in a marathon, say), you can go a bit higher, says Brian St. Pierre, RD, CSCS, director of performance nutrition at Precision Nutrition.

What should your calorie breakdown look like? St. Pierre is less a fan of calculating macros and more a fan of counting portions. For most active men looking to lose fat but maintain muscle mass, their daily meals would look something like this:

– 6 to 8 palm-sized portions of lean protein

– 6 to 8 fist-sized portions of vegetables

– 4 to 6 cupped handfuls of carbohydrates

– 4 to 6 thumb-sized portions of healthy fats

Be sure you’re chowing down on all three nutrients, though—protein keeps you full and helps you build muscle, carbs help you fuel for and recover from a workout, and fats help keep your hormones and immune system humming, St. Pierre adds. If you’re a numbers guy, “keep the protein to about 40% total calories, the fat around 30%, and the balance goes into carbs, which comes to around 30%,” per Perry. “This ratio range provides ample protein to your muscles to prevent muscle breakdown, ample fat to help you keep your hormones functioning smoothly, and also enough carbs to help power your workouts,” he adds.

2. Bear through the discomfort

We’re going to shoot it straight: Cutting calories is going to really suck for the entire first week. But the first few days of learning a new habit is the most uncomfortable, Perry points out. “Just push through the discomfort before your new habits become the new norm. Your mind and body will adapt.”

3. Put your hunger in perspective

“As you get leaner your brain will do two things to avoid starvation: It will make you hungrier since it thinks you are losing potentially beneficial fat and wants to restore it, and it will slow down your metabolism to try to slow or stop further fat loss,” St. Pierre explains. These systems were beneficial for the hundreds of thousands of years that we needed fat to stay alive, but not so much in today’s world. If you follow the rest of our plan, hopefully you won’t have to come face-to-face with the ravenous monster too often. But when you do, just remember it’s mostly a psychological game.

4. Stock up on protein

“The most important nutrient to focus on when trying to get lean is protein,” St. Pierre says. Adequate amounts will tamp down your hunger, boost your metabolism, and help you keep all-important muscle mass. Plus, keeping your protein levels high when you’re in a calorie deficit will help direct your body away from extracting protein from your muscles to burn as fuel and instead toward torching fat to meet your caloric needs, St. Pierre explains. He suggests aiming for six to eight palm-sized portions of lean protein per day.

After protein, St. Pierre says the next most important food to focus on is eating enough vegetables. “Vegetables obviously have tons of health benefits, but beyond that, they are nutrient-rich and very low in calories. They have lots of fiber and water and take up a lot of space in your stomach, helping you to feel full with less calories.” But all produce isn’t equal. A study last year in PLOS Medicine found the most beneficial vegetables for weight loss were the non-starchy kinds—lettuce, asparagus, broccoli, cauliflower, cucumber, spinach, peppers, tomatoes—and ones with lower fiber and higher glycemic load, like corn, peas, and potatoes were actually associated with weight gain. St. Pierre suggests aiming for six to eight palm-sized portions of vegetables per day.

6. Eat at the same time every day

You can wing it in meetings, on road trips, even during date night. But when it comes to cutting calories and trying to eat healthier, playing meal time by ear is going to puncture your progress. “Creating more structure so you eat at the same time each day makes sticking to a plan, controlling your hunger, and developing habits much easier,” Perry says. Plus, your brain is going to tell you you’re starving, remember? “We can always make room to eat more food if we’re still hungry, but it’s difficult to differentiate between psychological and physiological hunger in the moment,” Perry explains. He adds that once you are already lean, you won’t need to be so structured. But until then, plans equal progress.

The hormone released right before our body expects to eat, ghrelin, causes us to make worse decisions and have weaker impulse control, according to a study in Neuropsychopharmacology last year. That means if you wait until you’re hungry to decide what you’re going to eat, chances are the bagel in the break room will win over a salad you have to go out and find. What’s more, unless you brought your lunch or know exactly which market to pop into, you’re likely going to be stuck without many low-cal options. “Our environment is set up for us to fail. Most restaurants serve huge portions of food, most delis are filled with foods that are devoid of nutrients, calorie-dense, and not filling,” Perry says. “If you know what you are going to eat for the day at the beginning, you’ve really stacked the cards in your favor.”

This isn’t a metaphor for boozing it up. We mean, actually drink like a fish—only water, and more of it. “Drinking water is associated with faster fat loss and decreased hunger,” Perry says. Plus, even a small level of dehydration can decrease physical and mental performance, which means a worse workout. Science can’t quite agree on the ideal number, but Perry says eight glasses of water per day is sensible.

Before you eat a snack or meal, ask yourself, “How close is this food to its whole form?” Pancakes, croissants, french fries—most of the grub you know you shouldn’t be eating doesn’t pass this test. Meanwhile, fruit, meat, vegetables, nuts, seeds, and legumes all do pass. We don’t say these things to torture you—but the question is a super easy way to determine what is on your do and don’t eat list.

“You don’t need to be perfect,” Perry adds. “But if 90% of what you eat is whole foods or made from whole foods with minimal processing, you will get more nutrients and your hunger will be satisfied while eating fewer calories.”

You don’t have to cut it out entirely (although if you do, it will certainly speed the shed). But booze has 7 calories per gram of alcohol which can add up fast. Plus, those calories are adding zero nutritional value, so you’re not gaining any nutrients. If you’re down to spend a little more time on cardio in order to have a few brewskies with the boys, it certainly won’t derail your whole diet plan. But, non-negotiable: Don’t hit happy hour right after the gym. A recent study in the Journal of Strength & Conditioning Research found drinking alcohol after strength training prevents the muscles from signaling with the pathway that tells it to initiate muscle protein synthesis—the crucial process of building muscle back bigger and stronger.

When you work out, there’s a natural uptick in your fat oxidation rate—or your body’s pace of burning fat. A study in the Proceedings of the Nutrition Society earlier this year found that when you eat carbs before your sweat session, this process is hampered since your body will always choose to burn carbs before fat. However, the study also found your fat oxidation rate is unaffected if you down carbs after the workout. In fact, recovering with both carbs and protein can be beneficial, since your muscles need fuel to drive muscle protein synthesis, the study authors explain.

The exception to this all? If you’re going into a high-intensity workout or a long endurance run where you need a store of carbs in order to last. After all, it doesn’t matter what your fat oxidation rate is if your energy levels cause you to bag out halfway through your run.

12. Rotate among the same meals

“The less variables and moving parts you have in your diet, the easier it is to stick to a plan and hit your target calorie intake every day,” Perry says. Find three options you like for each meal and switch among them. Need ideas? Here’s a meal idea from each expert:

Breakfast:
Perry: Smoothie with 1 to 2 cups of frozen fruit (like berries), 1-2 tbsp nut butter (minimally processed brand), 1 scoop whey protein, and 1 cup of spinach or greens supplement.
St. Pierre: 2 eggs cooked with 2 fists of peppers and scallions; and oatmeal made from 1/2 handful uncooked oats, 1/2 handful blueberries, 2 thumbs chopped walnuts, and a touch of cinnamon and cloves

Lunch:
Perry: Salad with a lettuce base of romaine, mesclun, kale, or spinach; 6 ounces (palm size) of lean meat; veggies like peppers, carrots, or broccoli; a healthy fat source like almonds or walnuts; a light dressing.
St. Pierre: Smoothie with 2 scoops protein powder, 2 fists spinach, 2 handfuls fruit (such as frozen strawberries with a fresh banana), 1 thumb of flax seeds

Still not seeing changes? Do this.

If you want to ensure without a shadow of doubt you are going to get lean, follow these three tips in addition to the others:

13. Track your calories. “If you hit your target calorie intake, over time, you will definitely lose fat,” Perry assures. That means if you aren’t losing weight, there’s a high likelihood you’re underestimating how many calories you’re eating. Track the calories of everything that goes into your mouth for two weeks and re-evaluate.

14. Cut one handful of carb and one thumb of fat from your daily intake, St. Pierre suggests. Some people don’t process carbs as well as others, so that may be what’s holding you up.

15. Focus on decreasing your stress, which can cause you to hold on to fat. “Pet your dog, walk outdoors, do yoga, meditate, drink green tea—they can all help,” St. Pierre suggests

5 of the strangest, most shocking sexual disorders in men

Aerobic exercise can make your fat tissue healthier. Yes, you read that correctly.

4 ways to rescue your cardio from boredom