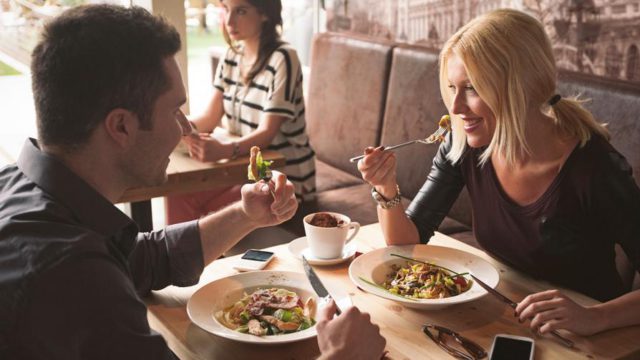 IN AN IDEAL world, everyone would be upfront about his or her expectations, men and women would take equal responsibility for courtship, and no one would ever use an ambiguous winky-face emoji.

Fortunately, women have more control over their love lives than they once did—you can no longer hand her dad a cow and call it a day—but we still have a long way to go. Many societal forces still condition women to behave passively, and in matters of modern romance, plenty of women defer to the man’s lead. On top of that, people tend to communicate attraction through cues rather than direct statements, and it can be difficult to interpret those cues correctly.

So: How can you tell if a woman likes you?

If you’ve Googled this question or asked your peers, chances are you’ve received a lot of misleading answers. She smiles when she’s talking to you. She makes plans to hang out. She replies to texts promptly. She listens when you speak. She laughs at your jokes.

You might as well add: She says ‘gesundheit’ when you sneeze, andone time she posted “Happy birthday” on your Facebook page.

And to be fair: If a woman is interested in you, she’s probably showing these signs. But the converse—that those signals mean she’s interested—isn’t reliably true, especially if you’re friends with her, and those “signals” could communicate anything from platonic interest to mere politeness. On the flip side, she may be too shy or insecure to show her interest outright.

Because here’s the thing, gents: You could monitor her pupil dilation, body temperature, vocal octave, and hair-flips with scientific rigor, but the fact is: the only way to really know if a woman likes you is by communicating with her directly. Scary? Yes, but far more effective than analyzing the direction her feet are pointing when you’re seated at a restaurant.

So that’s the real advice. And if you still want a list of cues she might drop if she’s interested in you, we’ve collected stories from real, live women about how they communicate interest to men. Here’s what they had to say:

Signs she’s into you

“When I’m interested in a guy, I usually show it with the rule of three: lingering presence, lingering eye contact, and lingering touch. I’ll try to be in the same space with him as much as possible, meet his eyes, and find excuses to touch him—like ‘accidental’ thigh touch when sitting next to each other, where neither of you pulls away.” — Emma L., 25, yoga instructor

“Although I think of myself as an outgoing person, I often communicate romantic interest in more of a passive than an active way. I’m basically looking for him to lead if I really like him because I fear rejection. I will match every escalation, but I’m probably not going to move things forward. If I’m interested, I’ll ask questions, I’ll reciprocate physical advances.” — Mia K., 30, novelist

“I’m kind of shy, so I find it difficult to make moves in person. But if I like someone, I’ll find some reason to contact him afterward—like texting him an article we discussed, or emailing him a funny video, or asking him to repeat that recommendation he gave me. Usually, I’m hoping a conversation will launch from here.” — Lilly J., 26, curatorial assistant

“One trick I learned from romantic comedies is to ask him to teach me something. It’s like saying, ‘I admire you as a person, and I want to know what you know.’ It’s also a good way to get physically close to someone. I tried this once with a guy who was weirdly good at archery. Hottest foreplay of my life.” — Ruth P., 27, translator

If you’re starting to get the sense that there might be some romantic tension between you and a woman, but you’re not totally sure, just remember: the same signal can mean two different things. For example:

“Whenever a guy is hitting on me in public and I’m not into it, I take refuge in my phone and try to make as little eye contact as possible. If he asks me questions, I either ignore him or answer curtly. If he approaches me at a party and I’m not interested, I just find a reason to leave the conversation.” — Kate F., 24, dancer

“Unfortunately, when I like someone, I run in the opposite direction. I think I’ve been hurt one too many times, and I’m afraid of making a fool of myself. I’ve been head over heels for this one guy for like a year and he has no idea.” — Esme R., 30, music producer

“When I suspect a male friend is into me and I don’t return the feelings, I try to talk about other men as much as possible. I’ll make sure he knows I’m going on dates, and sometimes I’ll even exaggerate my interest in someone else so he gets the hint.” — Olivia H., 28, consultant

“When I like a guy, I’ll find ways to bring up my relationship history and past sexual experiences. I typically don’t share this stuff once I’m dating someone, but I do this a lot when I’m first interested. It’s a way of saying, ‘Hey, did you notice that I’m sexually attractive and worthy of romantic love? It’s true, other people have thought so!’ And, ‘I’d like you to be the next person I add into my list of sexy, shocking anecdotes I tell friends in bars!’” — Nadia D., 26, law student

“When I have a crush on someone, I just generally show interest. I remember things he’s told me—what kind of music he likes, what his hobbies are, what are his favorite shows. Then I just try to hang out with him as much as possible.” — Meg Z., 27, actress

“Lots of my closest male friendships have soured because they’ve mistranslated my interest. I grew up with a lot of brothers and male cousins, so I’m pretty comfortable around men, but most straight guys assume that if I’m acting warm and making an effort to hang out, I want to have sex with them—even when I’ve explicitly said I’m just interested in friendship. When I reject an advance, they act totally betrayed, calling me a tease and saying I’ve led them on, then refusing to speak to me afterward. It’s really hurtful.” — Josie A., 22, volunteer coordinator

If you think she likes you: Next steps

Using a list to determine whether a woman likes you is a little like trying to diagnose yourself on WebMD: You can convince yourself of anything. Just because a few things on the list ring true doesn’t mean that she’s into you.

Most important, if you’re curious about how you two are getting along, then ASK HER. Don’t leap from online self-diagnosis to treatment—which is to say, from a friendly hangout into an attempt to have sex with her.

Be upfront—although ideally not blunt—about your curiosity first. Whether or not she likes you, she’ll appreciate the honesty. Coffee is the most innocent social beverage, so if you’re afraid of rocking the boat, maybe start there. If you’re feeling a little more confident, ask if she’d like to grab drinks sometime—a happy hour after work on a Thursday is a nice low-key option.

If there’s a group event coming up, you could invite her to grab a bite to eat first and head over together. You could find a fun event or activity that you both enjoy, tell her you were going to check it out, and see if she’d like to join—a casual music show, a new rock climbing gym, a movie that’s opening. Pitching the activity as though you were going to go either way takes some of the pressure off. If she’s interested in you, or at least open to the possibility, she’ll likely show enthusiasm, and appreciate your willingness to take the first leap.

10 exercises to develop the best pecs in the gym