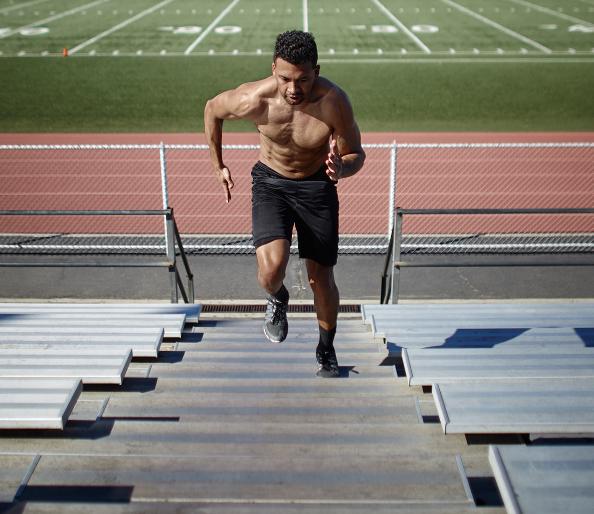 With so many “get ripped yesterday” and “lose 50 pounds by tomorrow” schemes out there, it’s tempting to keep looking for that easy way to lean out. But, even extreme plans that seem to work for a while are fraught with trouble (ahem, that Biggest Loser study). The reality: If you really want to be a slimmer you, you’ll be making some habit changes in terms of how you eat and move. “Lifestyle changes are the best way to improve health and manage weight long term,” says Donald Hensrud, M.D., M.P.H., director of the Mayo Clinic Healthy Living Programand editor of The Mayo Clinic Diet Book and The Mayo Clinic Cookbook.

The good news: If you really want to succeed, you won’t be going on a diet. “When someone undertakes a program with the typical approach to diet, they do something that’s very restrictive and drudgery but they think, ‘If I can just do this until I lose the weight, I’ll be fine.’” Hensrud says. “But if it’s negative and restrictive, it’s temporary.” The potentially less-good news (if you’re resistant to change): You will likely have to modify what you eat, how much you eat, or (probably) both.

Think Quality
“Accept that calories count.” Hensrud says. “This is basic, but there are many fads out there that say they don’t.” By the numbers, one pound of fat equals 3,500 calories. So in order to lose a pound per week, you’d have to reduce your calorie intake by 500 calories a day. This doesn’t mean that you need to count every morsel that goes into your mouth (though if you’re into that sort of thing, feel free). Rather, you need to understand calorie density versus nutrient density. Foods that are calorie-dense tend to be high in fat (after all, there are 9 calories per gram of it) and/or full of “empty” calories—as in, ones that don’t provide much nutrition (sorry, French fries, candy bars, and soda). On the other hand, nutrient-dense foods have lots of good vitamins and minerals for their calorie load. The best ones also have fiber, protein, and/or “good” fat content, which will keep you fuller longer (which is another reason that sugar-laden juice should probably be limited). Hello, veggies, fruits, whole grains, lean fish, chicken, beans, and nuts.

The best foods for weight loss

*Vegetables are particularly nutrient dense, especially those that are vividly colored, like dark greens and bright red tomatoes. Greens like kale and cruciferous veggies like broccoli and Brussels sprouts are high in fiber, which will fill you up.
*Fruit is a great choice, too, and though it is higher in sugar, the fiber content tends to offset that in terms of preventing a blood sugar spike. The color rule applies here, too, with brilliant berries leading the pack in terms of nutrient density. Still, watch your portions if your main goal is weight loss.
*Whole grains are fiber-rich and provide necessary nutrients such as B vitamins and magnesium, and yes, even protein. Wheat, oats, and brown rice may be most common, but get creative with quinoa (a particularly good source of protein), amaranth, buckwheat, and teff.
*Lean fish, such as wild-caught salmon, rainbow trout, and sardines are low in mercury and high in Omega 3s and, of course, protein.
*Boneless, skinless chicken breast is one of the best bangs for your buck in terms of protein content, with 27 grams in a 4-ounce serving.
*Beans are both low in calories yet very filling, being high in fiber and protein (how’s that for nutrient-dense?). Top choices include black beans, kidney beans, lentils, and chickpeas—but really any are worth your while.
*Nuts are best enjoyed in moderation on account of their relatively high fat content, which makes them more caloric ounce for ounce than other healthy picks. Stick to the serving sizes (usually an ounce) and you’ll reap the benefits of their wide array of nutrients and the satiating abilities. Especially good picks are almonds, cashews, and pistachios.

Re-Think Quantity
OK, so you’re not dieting. That means that, yes, you can actually have those French fries. Just probably not every day—and not super-sized. Consider quantity as a sliding scale, from limited fries and candy to unlimited veggies, and fill in from there with moderate portions of meat and beans (for protein), whole grains, and low-fat dairy. (The government is onto something with that whole MyPlate thing.) “An extreme example: If someone ate only 600 calories of jelly beans a day, yes, they’d lose weight, but not support their health,” says Hensrud. But they’d be pretty hungry and unsatisfied once the 60 or so jelly beans (or 150 smaller Jelly Bellys) were gone. (Note: We’re also not suggesting 600 as your target calorie count, but you get what we’re saying.) Foods to enjoy in moderation include:

The worst foods for weight loss

*Candy. Kinda a no-brainer, since it’s either all sugar or sugar and fat. Still need your sweet fix? Get down with fun size—and stick to one at a time.
*Pastries. A combo of sugar, fat, and refined flour—yeah, not so great for the waistline. And, unfortunately, that danish containing apples or the pie made of blueberries aren’t any better.
*Deep-fried…anything. Oil soaking into those potatoes and breadings might taste great… but it’s not filling and certainly won’t help you towards your weight loss goals.
*Chips. Ones that are fried or cheese-powder-coated certainly don’t scream good for you, but even the ones that purport to be “healthy” by being baked or made of, say, sweet potatoes, still are mostly empty calories.
*White bread. The grains have been de-germed rendering white bread fairly nutrient-sparse. Many are fortified (for that reason), but it’s generally better to get your nutrients from their natural, original source.

Try 80-20
As noted, deprivation doesn’t work long term. That’s why Nathane Jackson, CSCS, RHN, a health and wellness coach and founder of Nathane Jackson Fitness, recommends his clients follow the 80-20 rule: 80 percent of your calories should come from fresh, whole “single-ingredient” foods that you eat in largely the form in which they grow in nature (produce, meat, nuts, etc.). The other 20 percent can be of the more “processed” variety, in which he includes foods that have a place in a healthy diet, such as whole-grain bread. Of that 20, he says 5 to 10 percent can be from the junk food column. But “don’t have chocolate or ice cream in the house,” he says. “Rig the game so you can win, rather that relying on willpower. If you want it, you can go get it, but make it an effort to do so.”

Look at the Big Picture
After reading all that, you may still think you have some major dietary changes to make. Before you freak out, start by taking inventory of exactly what you’re eating, including portion size. An app like MyFitnessPal can make logging easier, with its extensive database, barcode scanner, and “memory” of most-used foods (we’re creatures of habit, after all). If you’re not good at estimating how much you ate (and studies show that most people aren’t), measure your food until you’re better at eyeballing it. And don’t ignore the calories you drink (soda, juice, beer), which Jackson says are easy ones to cut down on right off the bat. Once you know where you’re starting, you can make changes—slowly. “Try adding one more serving of fruit and one more of veggies, and one less of meat each day,” suggest Hensrud. Gradually, the goal is to have the nutrient-dense foods you add crowd out the calorie-dense ones you should limit, so you can eat plenty of food and feel full but consume fewer overall calories.

Move More
When it comes to weight loss, what you eat (and don’t eat) is far more important than your exercise plan. However, the more you move, the more calories you’ll burn, which will set you up for greater success. Also, you’ll develop fitness habits that will be essential for maintaining that weight loss once you reach your goal. If you’ve been totally sedentary, that means starting by getting up off your duff more. Set a timer to go off every 50 minutes and stand up, walk around, move a little. Studies have shown time and again that people who are naturally thinner move more—up to two hours a day. This timer deal will get you there

Add in Exercise
Just like you won’t overhaul your diet, you don’t need to suddenly become a gym rat. We’re aiming for sustainable activity here, so if you go from zero to five days a week at the gym, eventually you’re going to burn out. A more manageable goal, Jackson says, is to ramp up your activity slowly, starting with a half-hour walk every day. Then, he suggests some strength training two to three times per week to retain muscle as you lose fat. Choose multi-joint movements like squats, pushups, overhead presses, and rows—”your biceps are a small muscle, so they don’t burn a ton of calories,” Jackson says—and allow yourself plenty of rest between sets at first. “Working out too intensely at first can affect your appetite and energy, so finding a balance is key,” he says. A great circuit could include 8-12 reps of:

Ramp up the Cardio
Once some of the weight is gone and you’re feeling stronger, you can increase your strength-training intensity, taking shorter breaks between the exercises, which will increase the aerobic benefits. You may also add in one or two higher-impact cardio days, such as incline walking or running, cycling, or rowing. Start with steady-state workouts, where you go at the same pace for a half hour to 45 minutes, then play with intervals of exertion and recovery, which are higher intensity and have more calorie-burning benefits. Keep the higher-impact portion shorter than the recovery at first—say 30 seconds or a minute on, 1 to 3 minutes off—and then gradually decrease the recovery. When you’re ready, you can then increase the push until you’re at even time.

Get Your Zzzs
Chronic sleep deprivation can wreak havoc on your weight-loss efforts. “Your hunger hormones reset when you sleep, too, so if you’re deprived of quality and quantity sleep, you’re behind the eight ball when you first wake up, and more likely to crave junk food and carbs,” Jackson says. Sleep is also when your muscles repair post-workout, so it’s even more important to get enough once you’ve started your workout routine. “Quantity is good, but quality is also important,” Jackson says. “Sleep hormones are naturally released around 8 or 9pm, so by going to bed at 10 or so, you’ll feel more replenished because you’ll have slept during the window for best quality.”

Chill Out
Stress is another factor that can adversely affect your weight-loss efforts. “When under stress, your body also releases cortisol,” says Jackson. When stress is chronic, you’re fighting an uphill battle to lose weight. Further, “exercise itself is actually stress on the body, which is why it’s also important to have a balance of different intensities of training.” He recommends meditation, conceding that at first most of his clients roll their eyes. “But you don’t have to be a monk sitting on a mountain in Tibet. Take 20 minutes a day to relax and breathe and focus.”

If I’m not sore after a workout, does that mean I’m not making gains?

7 REASONS YOU NEED A PERSONAL TRAINER