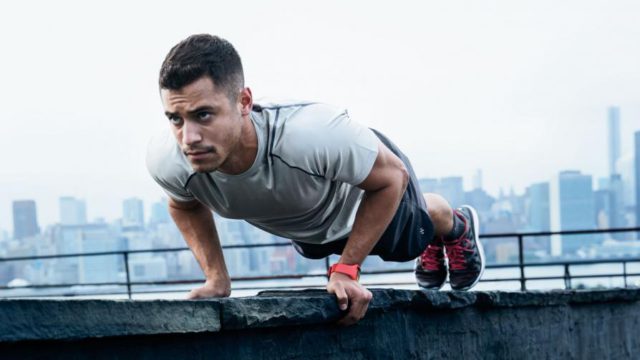 IF YOU’RE THE typical gym-going dude, there’s a pretty good chance you’ve heard the term “eccentric exercise” tossed around. Sounds like a fancy term, but it’s a simple concept: Simply put, eccentric exercise focuses on working muscles as they lengthen, rather than as they contract.

Picture yourself doing a basic dumbbell curl. Typically, most guys focus on doing work as the bicep contracts into the big cannonball everyone wants, and then relaxing the muscle as they lower the weight for the next rep. (That’s formally called concentric exercise.)

The eccentric portion of the move happens as you slowly lower the dumbbell, feeling the burn as your muscles resist the weight while still extending. Eccentric movements also factor heavily in activities like walking down steps or running down a hill, where your muscles act as a sort of braking system.

“The eccentric portion of a movement has been shown to have the greatest impact on muscle development,” says Eraldo Maglara, NSCA-CPT, “Eccentric training focuses on slowing down the elongated movement of the exercise in order to challenge the muscle for repair and growth.”

Muscles can also support more weight in the eccentric phases of exercise than they can in concentric phases. When you reach failure in a bench press, for example, you may not be able to push the bar any higher, but you can still apply enough force to hold it above your body or slowly lower it back onto the rack. That makes eccentric exercise a great way to blast through a plateau—with help from a spotter, you can eccentrically train with a higher weight, thereby training your muscles to eventually move more weight in concentric exercise.

What’s more, a 2008 Wayne State study showed that full-body eccentric training causes muscles to burn more energy at rest for up to 72 hours after exercise—in both experienced weightlifters and untrained people.

How to Work Eccentric Exercise Into Your Routine

You probably already incorporate eccentric exercise into your workout without even knowing it. (Just think back to that biceps curl example.) But, you can emphasize it even more to get more of the benefits.

One simple (but challenging) method to work eccentric exercise into your routine is to slow down the phase of each rep when you’re extending a muscle. “If it takes you two seconds to do a bicep curl, you would want to pause in transition and then make sure it takes you at least four to five seconds to lower it down,” says Anne Tierney, M.S., a trainer and the creator of Ki-Hara Resistance Stretching, which utilizes eccentric training. “That would hold true for any traditional move with free weights or on machines.”

Cable workouts are particularly good candidates for eccentric exercises, Tierney says, because they “allow for more natural ranges of movements.” Eccentric exercise forces your muscles to work at their most extended, which encourages muscle growth across a greater range of motion and helps prevent against injury.

Try this routine, created by Maglara, that focuses on the eccentric movement of each exercise. You’ll get all the strength perks of eccentric training, plus a heart rate-revving bonus: “Incorporating a quick cardio phase in your routine has been shown to increase your metabolic rate and burn more calories overall,” he says. Move through the following exercises, resting as little as possible between each one.

>Sprint in place for 30 seconds

>Standing Single Leg Curl with weight (3 sets of 10 on each side.) Count of one on the extension phase/ count of ten on the lowering phase

6 ways to remain friends with benefits