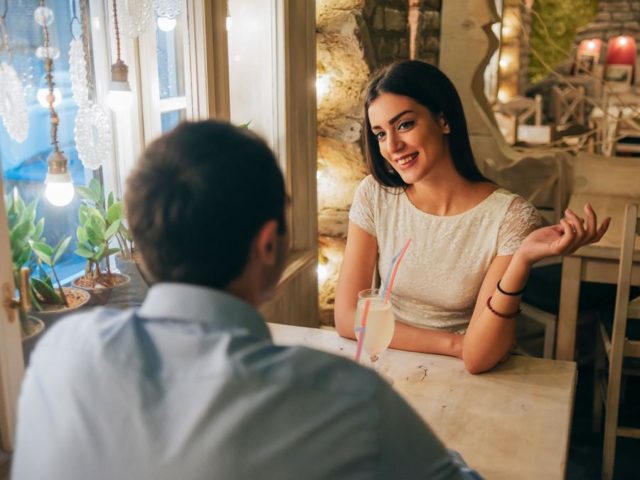 IT’S AN ALL-TOO-COMMON scenario: You’re chatting up a gorgeous woman you just met at a bar, but after 20 minutes of conversation, you still have absolutely no clue whether or not she’s interested. Before you back off, too afraid to make a play, start cluing into her body language.

Chances are, you’re underestimating the meaning behind her moves. Is she running her fingers through her hair? Stroking the base of her cocktail glass? Signals like these—and plenty of others—can be not-so-secret indicators of how she feels about you. To help you decode exactly what her postures, motions, and moves really mean, we’ve enlisted the help of two body-language experts.

Next time you’re at a bar, a party, or even hanging out in the park, use these signals to decide whether to put yourself out there—or retreat with your dignity still intact.

What she does: Mirrors your movements

What it means: She’s intrigued

“When we’re really interested in someone, we’ll likely find ourselves mimicking that person’s posture, gestures, facial expressions, and even their speech patterns and choice of key words and phrases,” says Vincent Harris, a body-language expert who has appeared on CNN, The Daily Show, and Fox News. However, when no attraction exists, we won’t do much to match their body language. According to Harris, if you notice a woman has started to shift her posture to align with yours each time you move, “you can be assured that she’s comfortable with you and that things are starting out on the right path.”

What she does: Dangles her shoe off of her foot

What it means: She’s comfortable with you

Ever look down and notice the front of her shoe is dangling from her toes? Take it as a sign that you make her feel comfortable. It’s as if she can kick off her shoes with you, which is “a pretty reliable indication of her level of relaxation,” Harris says.

What she does: Crosses her legs

What it means: She’s showing off how fit she is

When a woman has her legs crossed, with one leg pressed firmly against the other, it makes her legs look more toned and muscular. If your date does this, she wants you to know she’s in good shape—and how you might be able to benefit from that. “This appearance of muscle tone says, ‘I’m capable of performing at a high level sexually, and I want you to notice,’” Harris says.

What she does: Strokes her glass

What it means: She’s turned on

“Smooth circular strokes mimic and indicate sexual arousal and interest, explains Patti Wood, a body-language expert and author of Success Signals: A Guide to Reading Body Language. For more information, note where she is caressing the glass, “stroking the bowl of the glass shows she’s more extroverted and making a more conscious effort to show desire, while on the stem is more subtle.”

What she does: Wets her lips

What it means: She’s thinking sexually

Here’s a little-known fact: The tissue that makes up the lips on a woman’s mouth, and the tissue that makes up the genital labia, are identical—so the connection between the two areas comes as no surprise. “When a woman wets her lips with her saliva, or gives them the wet look with lip gloss, it’s an unconscious attempt to create a look that’s sexually inviting,” according to Harris.

What she does: Locks eyes with you

What it means: She wants you to make a move

When a woman is trying to get your attention from across the room, she’ll lock eyes with you—and then hold the gaze for several seconds. Afterward, she’ll quickly raise and lower her eyebrows, or slowly widen her eyes. Both of these communicate, “Yep, that look was for you!” Several studies have shown that men aren’t genetically programed to detect these eye-contact signals from a woman right away, so if she’s truly interested, she will most likely need to repeat the pattern of “look, hold, look away” two to four times before you get it, Harris says.

What she does: Flips her hair

What it means: She wants your attention

When a woman tosses her hair, it’s typically a sign she’s trying to lure you in. “Women tend to preen or groom themselves subconsciously when they’re attracted to someone, by flipping back their hair to fluff it, smoothing down their hair or clothes, or checking their lipstick in a compact,” Wood explains. And when the grooming gesture is paired with a smile or a gaze? She’s even more interested. When a woman flips her head it causes her whole upper body to move, which makes her stand out from among a group of women who are standing still. “This classic attention-grabbing move is a double whammy that combines preening and a flash of vulnerable neck,” Wood says. “It’s also a way for a woman to not so subtly show that she cares about how she looks to a man.”

What she does: Touches you lightly

What it means: You’re her territory

“Human beings show they are the owner of something by linking or connecting the thing they ‘own,’ to their body,” Harris explains. “A woman might communicate to other women present in the room that she has ownership of a particular man by touching him occasionally in full view of the other women.” It also helps her gauge where she stands with you, in terms of her comfort level. It says, “Hey, I just invaded your personal space, and now I’m watching to see whether you liked it or not.”

What she does: Strokes her thigh, neck, or throat

When a woman slowly and sensually strokes these areas, it implies that if you play your cards right, you may be able to touch her in these same ways. With you in front of her talking, her self-touch lets her imagine what it might feel like if you were initiating the touch, which can be arousing for her. “It also allows her to ‘test-drive’ those sensations,” Wood says.

The 5 strangest pre-workout supplement side effects, explained by science

THE STORY OF THE BREITLING SQUAD CONTINUES