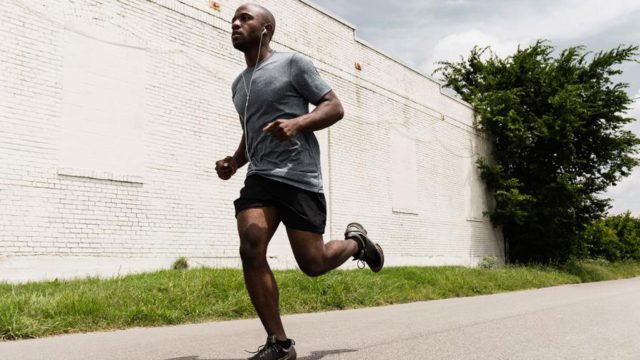 YOU CAN RUN pretty much anywhere, with pretty much no equipment. So it must be easy to start—just put one foot in front of the other, right?

Starting a new training program, like most things, is stepping into unfamiliar territory. You’re eager but unsure, excited but potentially error-prone. Most people—especially men—start out too hard, which leads to unnecessary fatigue and possible injury; or they just burn out, feeling that the last thing they want to do is go out for another plodding, painful run.

Getting past that early period is the key to both running’s benefits and pleasures.

Figure out why you’re running

You may want to start running to make your heart stronger, to up your endurance for other sports, or even just to fit into your tux again. Those are all worthy goals—and setting them is a valuable aid to getting where you want to go.

If you like a challenge, your goal might be running the local 5K, or something more ambitious, like finishing a Tough Mudder obstacle run or qualifying for the Boston Marathon. A typical beginner who trains properly—without overdoing it—can safely finish a 5K after about three months, and a marathon after a year.

Whatever you decide to aim for, committing to it will help your progress immensely. Those who don’t set goals tend to plateau; and while a short, easy run a few times a week is better than nothing, it’s not nearly as exciting as looking up at—then reaching—the next level. And the next.

Don’t get ahead of yourself

The importance of pacing—resisting the urge to run too hard, too much, or too often—can’t be overstated.

Imagine a marathoner starting a race like Usain Bolt, sprinting full out. In 20 seconds he’s got a big lead. In two minutes, he’s slowed drastically. After two miles, he’s been passed by thousands of runners and is probably walking—and unlikely to finish.

That’s no way to race—or train.

Becoming a runner, like racing a smart marathon, is a matter of pacing. To start out smart, all you’ll need are running gear and some good shoes.

Lasting changes can’t be rushed—a first long day in the sun gives you a burn, not a tan. Similarly, overaggressive early runs can lead to soreness, lingering fatigue, injury risk, and the verdict that “running blows”.

To avoid that syndrome, use our training schedule (below) to ramp-up gradually—what coaches call “building a base.” Instead of wanting to run less, or never again, you’ll likely want to run more. Keep holding back. The restraint will pay off: In less than a month, you’ll be running 10 minutes straight—maybe about a mile—and will have established a running regimen.

The base you build will prepare you for more demanding kinds of running, like interval workouts (short, fast runs with rests between them); tempo runs (“comfortably hard” runs at a goal pace); and possibly those aforementioned races.

But that’s for later. For now, congratulate yourself on avoiding the pitfalls that stop many would-be runners short.

Day 1
Go for a brisk, non-stop 20-minute walk. (Yes, just a walk—no running.)
Day 2
Rest. (Impatient yet?)
Day 3
Repeat Day 1, but after 10 minutes, jog for one minute—only slightly faster than your walking pace. Then walk the last nine minutes.
Day 4
Repeat Day 1.
Day 5
Repeat Day 3, but jog the ninth and 11th minutes.
Days 6-31
After Day 5, you can go out daily or every other day, but add only one extra minute of running every two days. (The other days can be walks, days off, or repeats of the previous day.) Keep alternating the walking and easy running. When you’re running half of the 20 minutes, switch to two-minute runs and one-minute walks. Then three-to-one, then four, and so on.

6 SUPPLEMENTS TO RAISE YOUR TESTOSTERONE

5 secrets you’re allowed to keep from your girlfriend

Belle’s Patisserie- The Best Cheatmeal in Town Since 2013