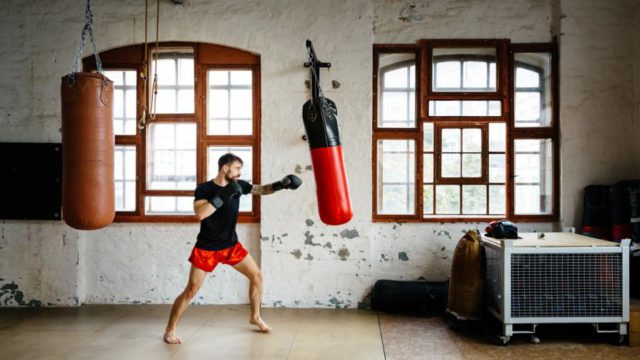 AS I CLAMBERED up the 41 steep steps to the UFC gym SoHo—every other stair emblazoned with motivational words like “strength,” “discipline,” and “determination”—I fought the urge to do an about-face.

I was there to try UFC’s Daily Ultimate Training strength and conditioning class, and I was…on edge. No, I wasn’t expecting the place to have the same peaceful aura of a eucalyptus-scented space like Equinox, but I also wasn’t too sure how I’d handle working out near the kind of bloody, cranium-crushing fisticuffs they show on pay-per-view.

I worried for nothing. Well, not nothing.

“The name UFC is intimidating, but we’re not a fight gym,”—at least not in the sense that bruisers show up for the sole purpose of beating other dudes up, coach Jay Mark, P.T., told me as he showed me around.

A barrage of bags hung from the walls like pigs in a meat locker; a caged ring was set back in the middle. All the equipment, he said, had been cherry-picked to help students master their chosen MMAdiscipline—boxing, Muay Thai, Brazilian jiu-jitsu—without puking or tapping out.

Finally, I’d stalled long enough: It was time for class.

The warmup of bear crawls, Spider-Man pushups, and inchworms was comically difficult, and made worse by the four minutes of burpees our group of 20 or so was penalized with anytime someone walked instead of ran back after a round.

But that was just a taste of the torture to come: 45 minutes filled with 45-second high-intensity intervals followed by 15-second (read: too damn short) rests. I “boxed,” rowed, slammed a med ball, swung a kettlebell, heaved battle ropes, blasted out single-leg stepups, and busted out goblet squats, all while my coach, Eminem, and Nicki Minaj pushed my sorry ass, constantly correcting my form and honing my technique.

The finisher was an Indian run—but one with a calf-cramping, lung-busting catch: We each had to haul a sled down the turf and back while the rest of the class hustled around them.

I finished shaking and spent, but feeling electric after surviving almost an hour of such high-octane work.

After a few months of taking two classes a week (all my crippling soreness would allow), I’d unsheathed a leaner, more defined physique. I’d also come to love falling into post-class sweat puddles with my gang of MMA newbies, veteran metal movers, and average Joes.

But I think I’ll leave the cage fighting to the professionals.