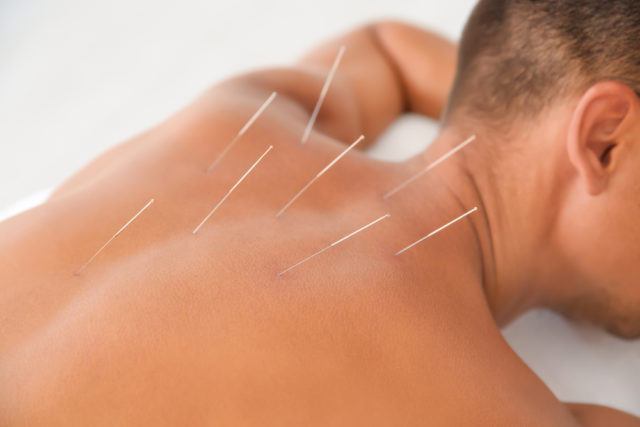 From Kobe Bryant and Draymond Green to Aaron Rodgers. and Olympian DeeDee Trotter, it seems tons of athletes embrace acupuncture these days. Experts agree the centuries-long Chinese technique.—which uses hair-thin needles inserted at set points to rebalance our qi, or energy—can have a myriad of benefits.

And now, high-performing athletes use it to soothe muscle soreness, maintain health, and boost their athletic performance, too. But is it worth bringing into your wellness regimen?

For some, it might seem a superfluous expense, with the average acupuncture session costing. $50 to $90 a session; Consumer Reports says that people spend $200 on average over the course of an entire treatment. Some insurances plans cover it, but it might seem a steep price for something that only might help.

However, when viewed as a way to optimize your overall health routine in a more holistic way, acupuncture may help you uplevel your fitness to exciting new heights. We rounded up a few studies and spoke with Dr. Kirsten Paynter, consultant and assistant professor at the Department of Physical Medicine and Rehabilitation at Mayo Clinic Arizona., about acupuncture’s benefits. Here’s how to figure out if it’s worth it for you.

. Listen to your body.

Acupuncture is a highly individualized practice. wherein an experienced acupuncturist administers a protocol specifically catered to each patient’s needs.

When pointing to several studies that explore acupuncture’s benefits for athletes in particular, she notes it’s difficult to test for the full scope of this in a Western-style trial because of this case-by-case basis. Not everyone in a research study has the same underlying energetics needing treatment, which means some Western studies don’t necessarily show acupuncture’s potential per individual. Expect an adjustment period.

“I tell people it will probably take four to six visits performed about once a week for us to know how much of a response you’ve had,” said Dr. Paynter, who mainly treats a population that has chronic pain, but emphasizes that it often does take anyone a few sessions to know if they’re on the right track.

“From there we decide based on your response how to start implementing a potential maintenance-based therapeutic intervention,” Dr. Paynter says. The number of regular sessions typically tapers off to once a month or every few weeks, depending on what’s best for you.

No longer seen as an exotic add-on to overall health, acupuncture is considered a safe alternative to drugs. It has been shown to alleviate ailments from bad backs to chronic pain, headaches, menstrual cramps, anxiety and even chemotherapy-induced nausea. Some athletes swear by it for sports-related injuries, too.

This is thanks to the body’s release of endorphins, dopamine and serotonin, plus a bevy of other physiological responses. A 2010 study presented to the Radiological Society of North America suggested that acupuncture is effective in reducing the brain’s perception of pain. Another study found. an immediate pain-relieving effect of tendon acupuncture on soft tissue injury. Paynter has observed this side of acupuncture’s benefits for years.

“There might be some elements of pain diminishment, but also a better ability to cope with the pain they have … a better sense of resilience in being able to manage their symptoms,” Dr. Paynter says.

Research out there may be promising, especially if you experience considerable post-workout muscle swelling, stiffness, and pain. In one 2008 study published in the Journal of Alternative and Complementary Medicine researchers explored the effects of acupuncture on delayed-onset muscle soreness in 22 healthy adults. Participants received acupuncture right after their muscles were fatigued, then again 24, 48, and 72 hours after. Researchers found acupuncture “proved to reduce perceived pain arising from exercise-induced muscle soreness.”

In another, Japanese researchers looked at delayed-onset muscle soreness in the same individual, applying a traditional acupuncture procedure to one leg and a sham acupuncture treatment to the other. They tested muscle stiffness, ankle range of movement, maximal voluntary contraction, muscle tenderness, pain on muscle stretching. and contraction and muscle strain. They even had participants do a one-legged vertical jump. Researchers found that acupuncture stimulation may lead to earlier relief of delayed onset muscle soreness: “Pain on muscle stretching was significantly less at 48 hours after exercise for the side stimulated by acupuncture.”

Another study put three participants through a rigorous workout of five sets of 20 drop jumps and found similar results. They named acupuncture a promising treatment, “because it showed that can reduce muscle soreness and improve pressure pain threshold and vertical jump.” Yet, they found limited results in muscular power and range of motion.

4. It can help the body heal faster in between workouts.

Acupuncture can also allow the energy-conserving parasympathetic nervous system—the part of your nervous system that is in charge of recovery—to assume control. This means your body switches to a “rest and digest” state: the heart rate slows, stress-hormone cortisol levels drop, and blood pressure decreases—all good things for workout recuperation.

A 2007 Japanese study. found that acupuncture boosts the body’s production of nitric oxide., which regulates circulation. More blood flow. is great for injury repair in general—helping you feel like Wolverine even more than those bicep curls..

Many studies, such as this one, also point to acupuncture’s anti-inflammatory effect.. “Mechanical stimulation of acupuncture can regulate immune function by stimulating the hypothalamus-pituitary-adrenal (HPA) axis, as well as sympathetic and parasympathetic pathways,” researchers explained. “Second, acupuncture itself is a type of local microtrauma on the tissues at the body surface, which can trigger or strengthen the body’s self-inflammatory reflex to alleviate inflammation.”

For those wondering if acupuncture can help after even more intense exercise: One 2009 Japanese study. explored acupuncture’s impact on the recovery ability of elite basketball athletes. They looked specifically at the presence of lactic acid in three different groups, with only one receiving acupuncture. “Blood lactic acid of the acupuncture group was also significantly lower than that of the other two groups in the 60th minute post-exercise,” researchers wrote. “Our findings have shed some light on the development of effective acupuncture schemes to enhance the recovery ability for elite basketball athletes.”

5. It can stop recurring injuries or prevent new ones.

Paynter says that acupuncture addresses the body’s imbalances with a much broader lens.

“Acupuncture really is a holistic part of a person’s general self-care, in an attempt to rebalance or maintain balance. within the system to make sure the system is optimally performing at all times,” Paynter says. This means it can be especially promising for people who seem to face the same injuries over and over. With acupuncture, a practitioner zooms out and pinpoints the root cause.

“Yes, you treat the symptom, but you’re also treating that underlying energetic that allowed that symptom to present itself and any imbalance that might have existed that allows that symptom to be a repetitive phenomenon for them because of their constitutional makeup,” Paynter says.

It can be a game changer for people who have the same injury, or can’t push through to new levels of fitness because of recurring ailments.

6. It can encourage you to be more mindful about your fitness.

Paynter emphasizes how traditionally, acupuncture is just one facet of a balanced well-being, alongside diet., nutrition, movement and sleep..

She says those who practice acupuncture have a chance to be more in tune with their bodies. “Each individual is their own set of balances and imbalances,” she says. “We’re all kind of in this dynamic balance and our own journey to figure out what’s right for us.”

Acupuncture is also a doorway for those regularly practicing fitness to understand themselves in a deeper way.

“For athletes it might be that they have a more aware sense of their body and the energy, and be able to perhaps then navigate their training schedule so they optimize their training on certain days when they know that their energy would be better in tune for a particular type of workout,” Dr. Paynter says.

If you’re at the stage where you’re looking to optimize your workout routine, find a lasting solution to recurring injuries and embrace a more holistic view of wellness, it’s worth investing in a few preliminary sessions with a practiced acupuncturist to see how your body responds. Best case scenario, you’ve launched your fitness to new heights.

“Acupuncture for me as a practitioner opened up a whole new realm of seeing people differently,” Paynter says. While the research out there can give us clues to what we might expect from treatment, there’s no way to know unless you dive in. “We all have to navigate for ourselves what’s really for us.”

The gentleman’s guide to choosing a signature fragrance