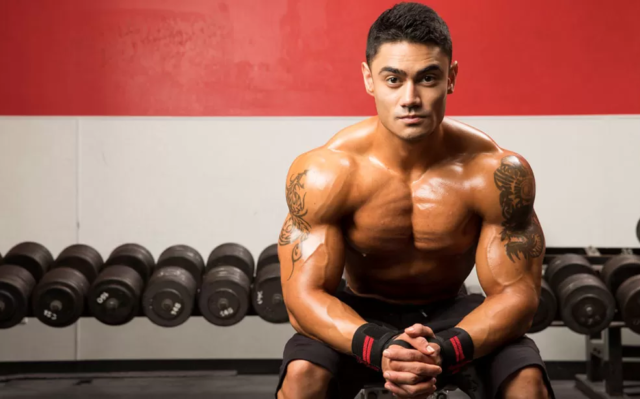 Some people see a photo of IFBB pro Jeremy Potvin, and their first comment is, “Right, pal. Show me a picture of him that’s not Photoshopped.” So dramatic is Potvin’s waist-to-shoulder ratio that his body seems like, well, fake news.

But as fans of the IFBB Pro League physique division know, Potvin is for real. In an era when some bodybuilders are criticized for thick midsections and protruding bellies, Potvin displays the type of aesthetically stunning proportions that built the sport of bodybuilding in the Golden Age.

Here, he shares his tips to build and maintain a jaw-dropping physique.

Deadlifts, bench presses, barbell presses-make sure that you do them and do them with perfect form. “I tend to lean toward the movements that a lot of people are scared of doing,” Potvin says. “I used to be obsessed with dealifts in the early years of my training. They really helped me a lot.”

“I like to train as heavy as possible,” he says. “My favorite chest workout is a flat barbell bench press. When I was younger, I liked to max out a lot. It helped build the thickness that I have in my chest.”

3. Take It Easy on the Weighted Abs Exercises

“Just like any other muscle, your abs will grow in thickness with a lot of weighted exercises,” he says. “I like to stick with hanging leg raises, decline crunches, obliques, things like that. Nothing crazy—just bodyweight movements.”

During his formative bodybuilding years, Potvin would experiement a lot and go for PRs (personal records). But he doesn’t do this too much anymore. “I still like to ego lift every now and the, ” he says, “but for the set that really matter, I shoot for eight to 12 reps.

6. Keep Your Core Tight When Lifting

It’s a classic win-win. It helps you maintain perfect form, and it also develops the abdominals.

Despite his regimented military discipline, Potvin feels you need to listen to your body, no matter what you have scheduled. “I go by feel a lot,” he says. While he trains every day, he won’t ignore his body when it’s telling him to take a rest. I’ll sometimes take two days of rest. you have to know when you need to shut it down.”

When it comes to his diet, potvin keeps it simple. “I stick with basic, healthy foods: chicken, fish, lean beef steaks for protein, and rice and potatoes for carbohydrates,” he explains. “For snacks and healthy fats, I’ll have oatmeal, some Cream of Wheat, and peanut butter.

9. But Keep Track of What You Eat

While Potvin doesn’t have a varied menu, he’s meticulous in tabulating what he consumes. “I know exactly what’s going in my body and how much energy I’m expending when I’m training.”

10. Focus on Calories, Not Meals

“I believe that it doesn’t really matter how frequently you eat, as long as you’re getting your calories,” says Potvin. He usually eats four to six meals per day, but during contest prep, he may increase that number.

Potvin is a big advocate of getting your z’s. i think sleep is one of the most important things you can do,” he says. “If I haven’t slept at least seven hours, I feel lethargic and groggy, and I kind of hate the next day.”

After his experiences in Iraq, Potvin doesn’t waste a day not being grateful for being an American and having the freedom to pursue his passion. “Becuase of my deployment, I know that life can always be a lot worse,” he says. “I don’t take life for granted, and I’m thankful for everything I can do.” Potvin believes that gratitude can go a long way in keeping you focused and positive, so you can reach your goals. Practice it daily.