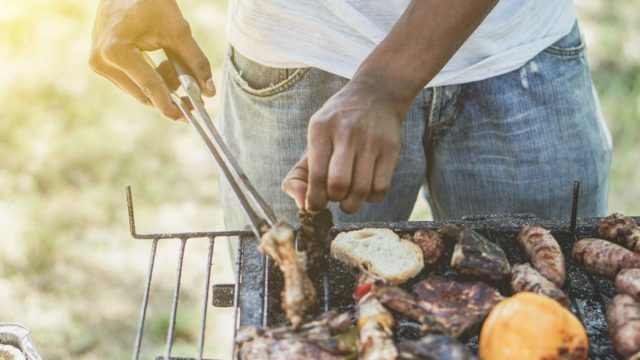 FOR DUDES, GRILLED goodies make up about 99% of the food we cook at home. There’s something primal and satisfying about starting a fire, cracking a brew, and throwing on some slabs of meat and hearing them sizzle while smelling the render fat. But recent studies have shown that that aural and olfactory symphony of fat cooking over open flame can create carcinogens called heterocyclicamines (HCA).

In a study that gave a sigh of relief to backyard grill gods everywhere, researchers at Kansas State University recently found that putting black pepper and other spices on the raw meat before hitting the grill grate can almost eliminate 100% of the HCA. A mix of 1g of black pepper and 100g of ground beef also inhibited HCA formation, but was too pepper-heavy to be very palatable, so they recommend adding others spices like garlic and oregano to hone the taste. They found that the most effective spices were rosemary, thyme, oregano, basil, sage, marjoram, clove, and allspice.

“Blending pepper with antioxidant-rich spices works so well in ground beef patties and on steaks that the spice formulation eliminates nearly 100% of HCA,” said study head J. Scott Smith, Ph.D., professor of animal sciences and industry. “In these cases, the spices are added at a level that is quite practical, so the result is flavorful and healthy.” Marinades, he also found, work well at keeping HCA away, just don’t let the meat sit in it for more than a few hours, as that’s when the antioxidants began to break down.

You can also keep HCAs from forming by keeping meats to a lower temp and not burning the food, as they are three to four more times prevalent on burnt meat compared to browned. Try to keep your temp around 300°, which is the point when HCA begin to really start forming. But don’t go too low, because you will miss out of the chemical reactions that make grilled food so tasty—just don’t burn it.

I’m scared of the gym. Can I just use machines?