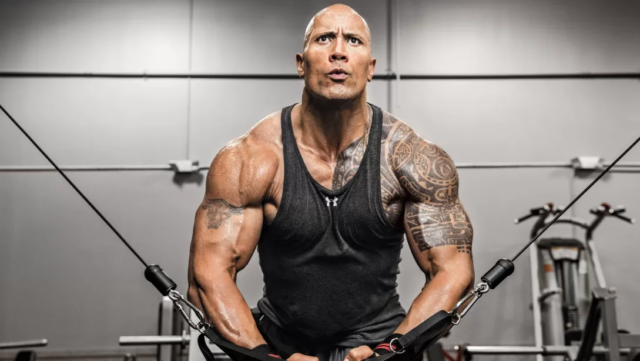 Being a dad may mean investing more time in family, but it doesn’t have to mean forgetting about fitness, and some of our previous covers definitely prove it.

While being a celebrity makes staying in shape more doable than it may be for the average Joe, there’s still an incredible amount of time and dedication that goes into maintaining a chiseled physique.

Click through for some of the most shredded dads that have been featured in Muscle & Fitness.

Arnold Schwarzenegger is arguably the most famous bodybuilder of all time, so his physique has literally gone down in history as the standard for jacked guys everywhere. That probably makes him the original jacked dad, too.

Another actor who got his start in WWE, Dave Bautista has managed to stay unbelievably jacked no matter how crazy his schedule gets or how many galaxies he has to save alongside Chris Pratt in Guardians of the Galaxy. Bautista has two kids, Keilani and Athena.

Dwayne “The Rock” Johnson took himself from WWE star to a huge name in Hollywood. He’s got more muscle than seems possible on his 6’5″ frame, and he grinds hard in the gym for it. He’s got three daughters, 16-year-old Simone, two-year-old Jasmine, and one-month-old Tiana. We’re sure their boyfriends will be terrified.

Dolph Lundgren hasn’t let age slow him down, and he looks as ripped as ever at 59. His badass roster of movie roles includes the villainous Drago in the Rocky franchise to Gunner Jensen in The Expendables.

From football to acting and everything in-between, Terry Crews seems to be able to do it all and stay shredded. Not just anyone could go from hilarious roles in shows like Everybody Hates Chris to his action-packed films like The Expendables franchise, but Crews can. On top of his acting career, he has four kids and a step-daughter to total five—yes, five—children.

Celebrity trainer Don Saladino may have his hands full getting A-listers like Ryan Reynolds, Blake Lively, Hugh Jackman, and Sebastian Stan into screen-ready shape, but one look at his Instagram will tell you that his top priority is family. His wife, Mel, and their children Amelia and Donny Jr. make regular appearances on his social media.

Michael Strahan went from defensive end on the New York Giants to world-famous media personality, but he still looks the part of an NFL star. Strahan has four kids, Tanita, Isabella, Sophia, and Michael Jr.

Paul “Triple H” Levesque is a WWE legend, and he definitely looks the part. Levesque has three children with wife and WWE promoter Stephanie McMahon.

Rapper, actor, and businessman 50 Centis one of the most famous rappers of all time, and he also happens to be in awesome shape. The artist has two children, Sire and Marquise.

WWE Chairman Vince McMahon isn’t just a ripped dad, but a ripped grandfather. He and his wife, Linda, have two children who have also stepped into the WWE spotlight: Stephanie McMahon and Shane McMahon.

To play a superhero, you need to look like one, and Hugh Jackman has been nailing it for years. He’s inspired guys everywhere to hit arms harder in the X-Men franchise as Wolverine, and even though his crime-fighting days are over, he still looks fit enough to save the world. He and his wife, actress Deborra-Lee Furness, have two adopted children.

Brock Lesnar looks every inch a badass, from his sheer size to his skill in both the professional wrestling ring and the UFC octagon. The 6’3″, 280-lb athlete and his wife, fellow wrestler Sable, have four kids, Luke, Mya Lynn, Duke, and Turk.

Everyone’s favorite Irish UFC fighter, Conor McGregor, is the biggest pay-per-view draw in UFC history, and he didn’t get there without some serious conditioning. One look at his physique tells you that he’s in great shape, and it’s made him the first fighter in UFC history to hold titles in two weight divisions at once. He and his girlfriend, Dee Devlin, have one son, Conor Jr.

8 THINGS YOU SHOULD DO DURING EVERY WORKOUT