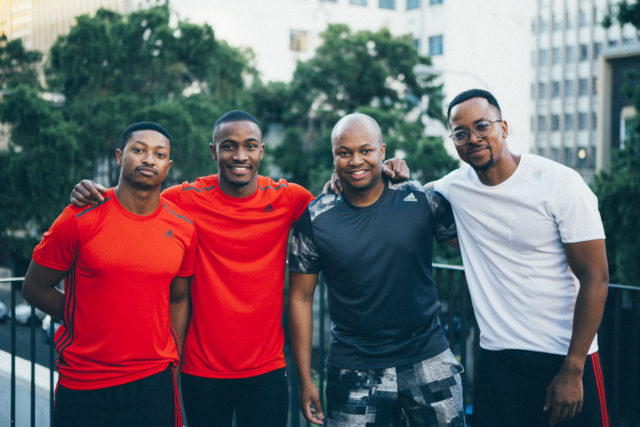 Last night, leading sportswear innovator, adidas and The City Sixers crew, co-captained by the ever-stylish Maps Maponyane and Lunga Shabalala hosted in preparation of the highly anticipated running event of the year, a pre-Run Your Crew training and social.

The evening commenced with an energising 5KM inner-city night run led by The City Sixers, followed by mouth-watering burgers, refreshments and great beats on the deck of adidas SA’s inaugural Runbase situated in Braamfontein. The event and its format served as an opportunity for crews to train for, as well as have a taste, of what they could expect from Run Your Crew – a fun social crew night-run followed by a celebratory social element.

Run Your Crew has a unique format which requires you to choose your running crew, and on the night, choose your distance of either 4km, 8km and 12km. As long as you start together and finish together. Participants can look forward to running alongside The City Sixers and more crews led by SA’s stars such as Amanda Du Pont, Tumi Voster and Letshego Zulu as well as well-renowned global crews.

With all crews finishing together at a block party hosted directly at the finish line, runners will be welcomed by a festive and engaging experience which takes them from the run to the block party. The impressive live acts and DJ line-up includes: DJ Zinhle, Desmond & the Tutus; Plaat Japie, Khuli Chana, Petite Noir, Kid Fonque, DJ Kent, Da Capo and DJ Lag.

Next Thursday, 24 November is the last chance to join the adidas Runners community and the RYC celebrity crew led by Letshego Zulu at Runbase, Braamfontein, commencing with a short night-run, followed by a Barre Body disco session on the deck.

BACK WORKOUTS 5 quick workouts to get rid of back fat