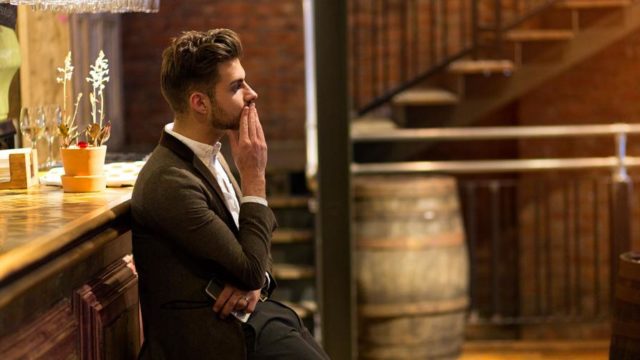 YOU KNOW THE drill: You’re on a date and things seem to be going smoothly. She goes to the bathroom while the waiter is bringing over a desert menu…but when she comes back, there’s some emergency and she has to cut your date short. You thought the night was going well, but now you’re second guessing it all—did you have food stuck in your teeth? Did you talk to too much about your mother? Maybe you shouldn’t have told her you dressed up for opening night of the new Star Wars (hey, we aren’t judging!).

Or, maybe there really was an emergency. The truth is, you won’t know until you reach out for a second date. But we’ve got 18 real stories of the worst (read: best) ways women have bailed on a date, both mid-meeting as well as before they even made it through the restaurant door.

“Years ago, on my way to a blind date, I went into full anaphylactic shock from eating nuts. I had to pull over and was rushed to the ER—just awful! I had my mom take a photo of me in the hospital bed and I texted it to the date to show him I really had been rushed to the ER on the way to our date. But here’s the kicker…I then kept that photo and used it a few times over the following years to get out of dates or bail last minute. It worked like a charm. Who can be mad at a girl in a hospital bed?” – Sarah, 30

“I went out with a guy who was slightly louder and more obnoxious than most I typically dated, but I thought he was kind of funny and charming and we shared a passion for health and fitness, so I agreed to a second date. He took me to a nice Italian place and when the waiter came, I ordered salmon, but asked for it over greens instead of pasta because I’m celiac. When the waiter gently asked if I wanted the pasta on the side, Mr. Loud-and-Obnoxious piped up and rudely declared, “She doesn’t eat carbs!” Baffled, I politely corrected him, “Actually, vegetables have carbs, so I clearly do eat carbs. It’s actually the gluten I can’t have—I’m allergic.” He then proceeded to argue with me about whether vegetables were carbs. Finally, I just said, ‘I’m not an expert on nutrition, but I’m pretty sure I know more about carbs than you. I’m also pretty sure this is not going to work.’ I just stood up and left. I was shocked when he had the nerve to continuously text me over the next week (no apology included).” – Amanda, 25

“The day of a first date, I completely lost my voice from a tradeshow, but I met up with him anyway. It was going really well, until he answered a phone call from his mom and started kissing my neck—not at the same time, both weird first date behavior. When he asked me to go back to his place to pop champagne off his balcony—which, like, really?—my voice was 100% gone, so I told him I was sick and needed to just go home. I had already told him that my whispering wasn’t from an illness, but he was paying such little attention our whole date that he didn’t even catch this.” – Alyssa, 23

“I went on a date with this really, really sweet guy to try and get over a breakup. Halfway through, though, I couldn’t keep it together and I just started bawling. The guy froze. I was mortified; I just got up and ran out of the restaurant. He texted me later and the next day asking if I was OK, but I was too embarrassed to even answer him. I still feel bad—I hope he doesn’t think he was the one who made me cry.” – Becky, 27

“Honestly the worst thing I’ve said, or I guess not said rather, to get out of a date is nothing. I’ve completely ghosted on dudes I just didn’t want to see, even when we already had dates planned. Super-mature right?” – Casey, 27

“I’m normally too nice to end things early during the date! But I have a go-to for saying no to a second date: I tell them that while they were very nice, but, similar to Usher’s classic 2001 hit “U Remind Me,” they just have a certain vibe that reminded me too much of an ex. I reassure them that it’s probably this quality that attracted me in the first place, but that I don’t think I can get past it. This worked a few times, and most guys were relieved that it had to do with my past rather than with them. That is, until one guy got offended. He told me, ‘The thing that’s bugging me is the idea that I was too similar to someone else. I strive for originality. Ugh. I’m going to go dye my hair purple now. Byeee!’ Glad my gut trusted to not have a second date with that one!” – Marie, 28

“I’ve completely sent out S.O.S. texts to friends during dates before and made them call me with an emergency. My usual go-to is that my roommate just got in a wreck and I have to go help her.” – Jacqueline, 27

“Once, a guy I had gone on a first date with started texting me to set up a second to go to the movies. Then he started telling me how into me he was, and I realized I just didn’t feel the same. So I tried to be straight and said, ‘I’m just not interested in you romantically. But I am still interested in seeing Frozen.’ He said, ‘Just name a time and place.’ It was so sweet, but also so sad that he liked me enough to see a Disney movie platonically, I couldn’t lead him on—so I just never set the date.” – Christine, 26

“One time, I showed up to a date and the whole thing just felt completely off. I hated the restaurant and the guy was nothing like I remembered when we met last at a bar. So I panicked and acted like my phone was ringing. I stood up super-quick and was shouting ‘Oh my god!’ and then I told him that my best friend was going into labor so I needed to go meet her at the hospital. There’s absolutely no way he believed it and I ran out of the restaurant really awkwardly. I was 22 at the time too, which made it even less believable!” – Flora, 26

“Right around when Modern Romance [by Aziz Ansari] came out, this guy I had slept with a few times had bailed on our date the week before and then Instagrammed being out at the bars—exactly the kind of B.S. Aziz makes you realize you shouldn’t put up with. So when he texted me to see if I wanted to chill later that night. I borrowed from the master: ‘Sorry, can’t. I’m leaving on a secret mission with the space program tomorrow, so I just don’t think it’s a good time for me.’ Thanks Aziz!” – Melissa, 27

“I’ve gone on a lot of dates with self-involved jerks—just total douche bags. I should probably just be straight and call them out, but I really don’t like confrontation. More than once with these kinds of guys, when he asks if we should get another drink or go somewhere else, I say, ‘I probably shouldn’t. I have to get up early for Bible study.’ When it comes to jerks, suggesting that I may be saving myself for marriage sends them running for the hills, no confrontation necessary.” – Megan, 30

“I was dating around and this one guy from Tinder would send me emails of his sandwiches with a description of sorts about said sandwich. I don’t know why…maybe he thought it was quirky and fun? I didn’t dismiss it all together, but it was notably odd. When he asked me out a second time, I dodged it for a day or two mainly because I was more invested in the other guy I was seeing—but I didn’t want to just ghost so I finally told him, ‘I just don’t think this is going to work. I’ve been super-busy lately—and you’re really into sandwiches.” – Brittany, 27

“I once spilled an entire glass of water on myself so that I would have to go home on a bad date. Why was it so bad? He wouldn’t let me order my own meal at dinner—he made me split his hamburger with him!” – Olivia, 28

“I was on a date that was going terrible, so I told the guy I had to go put more money in the meter. The time really was running up, but when I got to my car, I didn’t have any change—not that I looked that hard. So I just left.” – Jamie, 26

“Hey sorry for the short notice, but I’m gonna have to bail on tonight. TBH, I just really want to find out what happens to Steven Avery, more than I want to have sex tonight.” – Nicole, 29

THE FAT LOSS BENEFITS OF MCTS