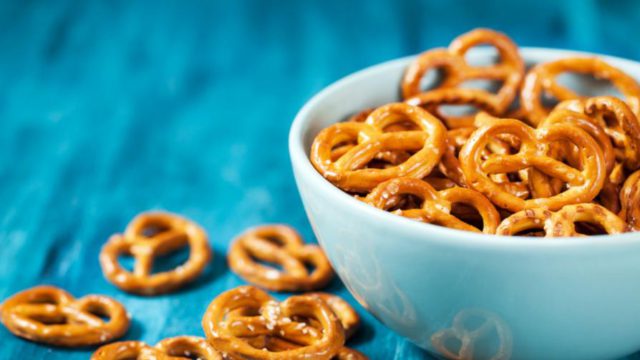 EVERYONE SEEMS TO be buying into the false assumption that pretzels and other salty foods do actually make you thirsty. But, of course, some scientists had to come along to ruin everyone’s preconceived notions about salty snack foods and crush them to little pieces in two new studies just published in The Journal of Clinical Investigation.

Curiously, scientists have never investigated the notion that the amount of salt you take in can influence your drinking habits because they knew that upping salt intake makes you pee more, so they assumed it was because you drink more water since you are thirsty—wrong say the researchers who did these new studies.

And in an odd twist, this research came about because the study authors wanted to figure out what the needs of an astronaut going to Mars would be on the long trip where every part of their nutrition, water intake, and salt consumption needs to be controlled. For the first study, they simulated the trip through space with 10 men locked up in a mock-up of a spacecraft for 105 days, and then another for 205 days. They guys got identical diets, but with three different amounts of salt in them.

They found that their urine contained more salt when they ate more salt and that they had more pee—obvious results—but then they also found that the increase in urine wasn’t because they drank more to slack a salty mouth, it was because salt prompts the kidneys to conserve water. The saltier the diet, the less they drank, and the more salt they had the more it stayed in the urine, while more water moved back into the kidneys and body, which is what the second study explored in rodent subjects.

In that one, they discovered that urea, which is a substance formed in the muscles and kidneys to help get rid of nitrogen, but it stacks up in the kidneys and battles against the water-saving influence of salt. “It’s not solely a waste product, as has been assumed,” said study co-author Friedrich C. Luft, M.D. “Instead it turns out to be a very important osmolyte—a compound that binds to waterand helps transport it. Its function is to keep water in when our bodies get rid of salt. Nature has apparently found a way to conserve water that would otherwise be carried away into the urine by salt.”

HOW TO FIX YOUR BAD POSTURE