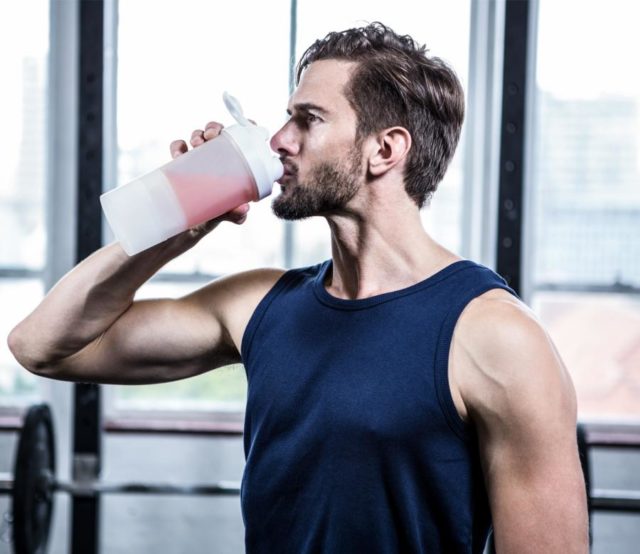 WHEN YOU HIT the gym hard, it can be tempting to load up on every shiny tub of mysterious purple powder you can get your hands on in hopes it’ll turn you into vintage Schwarzenegger overnight. But rather than loading up on some generic “best supplements” just because they’re popular, it makes sense to identify your specific needs as an athlete, then address those issues first.

Are you a hardcore powerlifter? A physique-focused bodybuilder? A long-distance cyclist? All those endeavors require slightly different nutrient profiles—but it’s important to start with the fundamentals.

“The average guy doesn’t always need to take anything crazy,” says Kylene Bogden, M.S., a board-certified sports dietician at the Cleveland Clinic’s Center for Functional Medicine. “If your diet is great and you’re sleeping well, it’s rare you’d need anything besides these select supplements.”

Oh, and one more thing: If you’re subsisting on late-night fries and couch pizza, fix that problem first. “Our rule is ‘food first,’” says Damon McCune, M.S., the director of performance nutrition for the athletics program at the University of Nevada–Las Vegas and a consultant to physique athletes and bodybuilders. “The number one thing I see across the board is people aren’t eating enough. This means they’re deficient in one or more nutrients because of that.”

So before you blow your next paycheck on some rattlesnake venom that promises to increase your bench press max (hint: it won’t), make sure you’ve got your nutrition plan down. If you’re still feeling sluggish in the morning or run-down after workouts—and your doctor gives you the go-ahead—consider taking these seven nutritionist-recommended supplements to get what you need.

If you feel generally tired and out of sync…

Consider taking: a multivitamin with vitamin B complex and vitamin D

In theory, your diet should be good enough to get all the requisite macros and micronutrients. But in the case you don’t, a multivitamin can be a great “safety net,” McCune says. “They’re relatively inexpensive for what you get.” Make sure you find a multi with a vitamin B complex, since they “help regulate the nervous system and make sure your body effectively metabolizes carbs, protein, and fat,” Bogden says.

Even if you opt not to take a multi, prioritize vitamin D supplements. “Almost every cell in the body has a receptor for vitamin D, so it plays a huge role in the nervous system, bone health, and immune function,” Bogden says. “Active guys tend to notice a positive difference in how they feel overall. Vitamin D seems to stabilize how your body functions.”

When to take: In the morning. Vitamin D may inhibit melatonin production, Bogden says, which could disrupt your sleep cycle.

Recommended amount: Any good multivitamin has a recommended daily amount. Supplements around 2,000 I.U.s are standard.

You should know: McCune recommends taking multivitamins that come in packs, rather than those that try to pack everything into a single pill. “Each of those ingredients will be more stable in its own medium,” he says.

If you’re feeling tired at the gym…

Hardcore gym rats love talking about how sicknasty their pre-workout supp is—even though in most cases the most effective ingredient in any pre-workout supplement is regular old caffeine. “The scientific literature shows that caffeine can help reduce the perceived exertion of a given workout—meaning it feels easier compared to the same workout without a caffeine boost,” McCune says. Pro athletes and Olympians swear by it, too—it’s essentially a legal performance-enhancing drug.

Don’t take more than: In one sitting, 300mg—about three cups of coffee—is probably the absolute limit for most people, McCune says. Anything more than that might make you jittery, but it won’t help your workout.

You should know: “A lot of people don’t have the gene to metabolize caffeine well, which means a single cup of coffee can affect their sleep at night,” Bogden says. “If it’s affecting your sleep in any way, it might actually harm your recovery.” Also: Because caffeine is a diuretic, you should be sure to offset your intake by upping hydration, McCune says.

If you run out of energy mid-workout…

You can absolutely gain an advantage from carb supplements during your workout. These supplements typically take the form of purified glucose polymers, which deliver glucose to your muscles while they’re under stress. They’re especially useful during long workouts.

“There is a ton of information to support liquid carbohydrate consumption during exercise, particularly in cycling athletes,” McCune says. “Even if they swish it around in their mouth and spit it out, they feel like they’ve lowered their rate of exertion.”

Carbs come in a huge variety of labels, so do your homework about the supplement you pick up. “If you want to get really fancy, a new supplement called branched cyclic dextrin is popular—it’s not cheap, but it clears the GI tract very quickly and gets to the muscles faster,” McCune says.

When to take: During your workout. The scientific evidence mostly supports supplemental carbs during long (at least 45 min.) endurance workouts.

How much to take: There’s no set amount. McCune recommends mixing carbohydrates with water to create a 6–8% solution—roughly the concentration of Gatorade or Powerade.

You should know: “There’s no perfect carb for everybody,” McCune says. Gels work for some athletes and leave others with upset stomachs. Be cautious if you experiment with carb supplements mid-workout—even sports drinks.

If your muscles get too tired from lifting…

Creatine is an organic acid that helps muscle cells create ATP, which translates to higher amounts of available energy when you’re working out. “There’s a mountain of literature to support creatine as a workout supplement,” McCune says. And yes, it can increase your max strength.

And despite what you may have heard about creatine’s reputation, it’s perfectly safe when taken in the right amounts and as long as you don’t have a pre-existing condition. “Scientists have debunked the myth creatine makes you bloated,” McCune says. “It won’t turn you into the Michelin Man.” Always check with a doctor before you start taking creatine, especially if you’ve had kidney problems in the past or it’s an issue in your family.

When to take: Before or after a workout is fine, McCune says. “A lot of guys opt to take creatine with a protein shake after a workout. The timing doesn’t seem to matter.”

Don’t take more than: The limit for most guys is 5g a day. “Usually people aren’t going to be able to absorb more than that,” McCune says.

You should know: Guys who tend to eat a lot of red meat don’t respond as well to supplemental creatine, McCune and Bogden note, likely because red meat already contains high amounts of creatine.

A large body of scientific evidence says that the “good fats” in salmon, nuts, and chia seeds are absolutely essential to the healthy functioning of your body—especially for active guys, McCune and Bogden say. “Omega-3s can reduce oxidative stress and inflammation, which then leads to less muscle soreness post-workout,” Bogden says. “It’s especially effective for endurance athletes, who incur more oxidative stress because of their long-distance training. If you’re an endurance athlete, you should probably be taking an omega-3 supplement—it’s a little hard to get what you need through nuts, seeds, and fatty fish.”

When to take: Bogden suggests taking an omega-3 supp after a workout.

How much to take: The average dose for the average male is 1,000mg a day, although hardcore endurance athletes should probably take closer to 2,000mg a day, Bogden says.

You should know: “Do your homework on the company that makes a supplement, because some are better than others,” McCune says. “Sure, you can get a bottle of cod liver oil for cheap, but it’s not necessarily the best stuff.”

If you’re supplementing with protein powder…

Yes, a capsule full of bacteria might be exactly the boost your workout needs. “Most guys don’t know probiotics can not only reduce inflammation but also improve protein absorption,” Bogden says. Improving your gut fauna—that’s a fancy term for “a good amount of bacteria in your stomach”—has a host of other dietary benefits, and may even improve your mood.

When to take: Post-workout with your protein shake, since probiotics can help your body make the most of your supplemental protein intake, Bogden says.

How much to take: The standard measure of a probiotic’s effectiveness is 1billion cfu/g, which is representative of how many good bacteria are packed into a given supplement.

You should know: “Ask a physician about a recommendation for a particular probiotic,” Bogden says.

If you’re not sleeping well…

Like vitamin D, magnesium is responsible for a huge range of cellular functions in multiple parts of your body, including your bones, muscles, and brain, Bogden says. It’s also a key factor in helping your body get restorative sleep—and “great sleep translates to great recovery,” Bogden says. “Every active guy needs magnesium in large amounts because your body needs it for ATP production. If you’re active, you need it.”

When to take: “The absolute best time to take magnesium is 30–60 minutes before bed,” Bogden says.

How much to take: “On average, 400mg is a good middle-of-the-road recommendation for the average adult male, but consult with a doctor before taking this supplement,” Bogden says.

Honda’s hyper hatch currently on test. Not a minute to rest

THE BEST NUT AND SEED BUTTERS FOR HIGH-PROTEIN DIETS