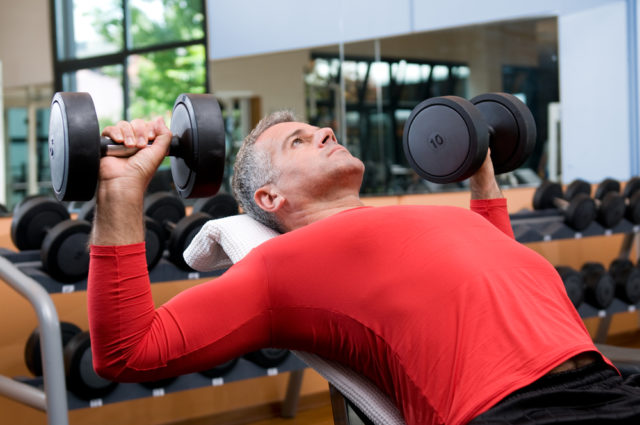 A lot of guys use age as an excuse to go easier in the gym, but if you consider the age of some of the top pros in the sport (Dexter Jackson was 38 when he earned the Olympia title; Dorian Yates won his last Mr. O at 35; and Ronnie Coleman was 41 when he won his eighth Sandow), then it certainly is not a limiting factor when it comes to building muscle.

Researchers at the University of Central Florida (Orlando) placed untrained men and women between the ages of 18 and 40 on a 12-week periodized, twice-per-week, strength-training program for their non-dominant arm (the opposite arm served as a control).

The team found that when they compared the subjects by age group (18–19, 20–29 and 30–39), there was no difference in the amount of muscle mass gained for any of them. All three groups gained about 20% more muscle on their arms. The only benefit of being younger was the ability to gain slightly more one-rep max strength on the preacher curl. However, the older the subjects were, the more strength and muscle size they had when they started the 12-week program. Typically, the more strength you have, the less strength you can gain.

There really is no difference in the ability to gain muscle size as you age, at least up to 40 years old. Although older trainers may have some minor limits on the capacity to increase one-rep strength, they are likely stronger at the beginning of a program than younger trainers are.

If you’re just getting started at weight lifting — even if you’re past your 30s — you’ll be able to make the same gains in muscle size as someone much younger. And you can train just as often and as intensely as younger lifters. So it really is never too late to start weight lifting.

The 5 best cross-training workouts to amplify your athletic training