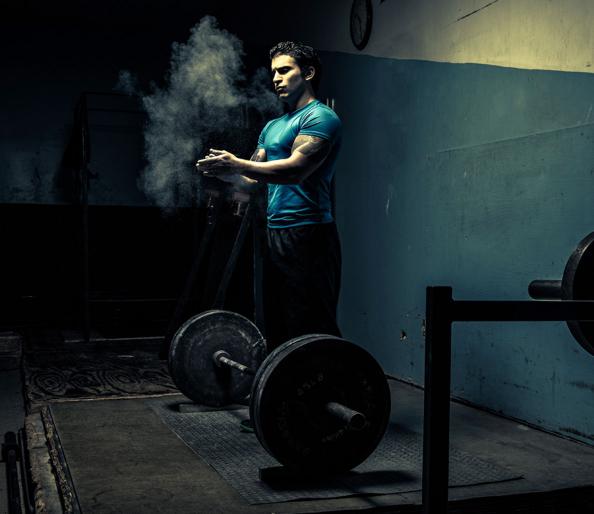 At some point, you’ve probably seen some dude come into the gym—he probably had a beard—load up a barbell with so many 45-lb. plates that the steel was literally bending, and send shockwaves of awesomeness across the floor with some of the most impressive squats you’ve ever witnessed in person. And at that moment, you probably wondered: How in the hell do I do that?

Unlike bodybuilding, which emphasizes the pursuit of a particular physique, powerlifting is a sport of attaining as much raw strength as is humanly possible. Primal in its simplicity, powerlifting ain’t always pretty, nor is it especially glamorous. But it is practical, unquestionably hardcore, and a virtual guarantee you will never again struggle to move your couch.

“To be a powerlifter means being dedicated to a goal: Find out how strong you can get, and then get stronger than that,” says Sean Collins, C.S.C.S., a certified USA Powerlifting Club Coach and owner/coach at Murder of Crows Barbell Club in Brooklyn, New York. “A powerlifter takes three seemingly simple exercises—the deadlift, squat, and bench press—and works to learn and excel in every single aspect of them, since strength is just as much a skill as it is a quantifiable characteristic.”

This is the Men’s Fitness guide to getting started in powerlifting.

WHAT DOES IT MEAN TO BE A POWERLIFTER?

On its face, powerlifting is pretty simple: Develop as much all-out strength as you humanly can, primarily through the “big three” fundamental lifts: low-bar back squat, bench press, and deadlift. But talk to powerlifters long enough, and you’ll discover that they often develop a mystic sense about their training. Like marathon runners and Ironman triathletes, powerlifters operate at the brutal edge of their own physical capability.

That means powerlifting is demanding and extremely taxing, both physically and mentally. There’s no faking it: Just you and a barbell, on a platform, locked in an eternal battle against gravity. And for lifters who want to want to go beyond merely “exercising” and dedicate themselves to the pursuit of hardcore strength, it’s rewarding—and, ultimately, transformative.

And while powerlifting has a somewhat brutish reputation—powerlifters like to say their sport is just picking things up and putting them down—anyone who’s bench-pressed twice their body weight or deadlifted 500 lbs. knows that powerlifting is both a sport of mental fortitude and finesse.

5 REASONS YOU SHOULD BECOME A POWERLIFTER

Strength Translates to Everything: “Strength is the most valuable investment you can make in your life,” Collins says. “No athlete ever said, ‘I lost this game because I was too strong.’ No one wants to make more trips to the car when they’re unloading groceries.”

You’ll Become Mentally Tougher: Just as endurance training ultimately becomes a mental battle against your lungs, powerlifting demands steely psychological composure—particularly because training often entails pushing to failure, and then getting right back on the platform. “The barbell teaches you discipline, sacrifice, how to power through a weight you thought impossible, and how to navigate the darkness of hitting a weight that you’ve never done before,” Collins says.

It’s Safe: Under the eye of a good coach and with the right prep, powerlifting’s injury rate is far below that of sports like soccer or basketball; it’s closer to tennis and volleyball, according to a widely cited 1994 study conducted in the U.K and published in the Journal of Strength and Conditioning Research. (Powerlifting has also been shown to decrease the risk of osteoporosis.)

It Rewards Longevity: Basketball players are “old” by the time they’re 30, and football players and soccer players peak in their 20s. Powerlifters, on the other hand, are typically at their strongest at 35–40 years old, making powerlifting an accessible sport if, for some reason, you didn’t start it in your teens. Credit the phenomenon of “old-man strength,” the low injury risk, and the psychological veterancy.

But You Should Know: As with any pursuit from bodybuilding to basketball, progressing in powerlifting becomes progressively more difficult, requiring more effort and dedication as time goes on. And, as with anything worth doing, it takes time and focus. “The road to 90% is relatively easy,” Collins says. “The road from 90 to 100 is hard as hell.” That, and “your friends seem to ask you for help a lot more often when they’re moving out of their apartments,” he says.

The Ultimate Bodyweight Program for Powerlifters >>>

WHAT YOU’LL NEED TO START POWERLIFTING

It sounds obvious, but choosing your gym is a key step. Sure, you can theoretically train for powerlifting in the average big-box gym. But if you’re serious about the sport, then training at a powerlifting-friendly gym—or at least one with a setup that allows you to take your time on the bench press and squat stations without getting dirty looks from the staff and other lifters—is ideal. (Check out USA Powerlifting’s gym search tool to find one near you.)

You’ll also be able to watch and learn from knowledgeable powerlifters and coaches. If there aren’t any around, you can always inquire at your local CrossFit gym—some have separate powerlifting clubs that train independently of CrossFit classes.

Otherwise, powerlifting doesn’t require too much gear of your own. Powerlifters often wear powerlifting-specific shoes (our recommendations here), which offer a solid, slightly raised heel to help lifters get into better position underneath the barbell while still engaging their posterior chain. For deadlifting, go with a pair of simple Chuck Taylor All-Stars or deadlifting slippers, since their thin rubber heels reduce a deadlifter’s range of motion and maximize the foot’s surface area with the floor.

Another help: Chalk. “It aids your grip when deadlifting and benching, and improves the tightness of your squat,” Collins says.

Many powerlifters invest in specialized equipment like knee sleeves and lifting belts, but you can probably hold off on those until you seriously commit to powerlifting.

5 WAYS TO AVOID THE MOST COMMON ROOKIE MISTAKES

Work your way up. “Don’t start off too heavy,” Collins says. “Most people get turned off because they experience failure very early on a novice program, and that’s because they let their ego get in the way. Check your ego at the door, and make sure you educate yourself on form and basic methodology prior to getting under a barbell.”

Stay disciplined. If you’re going to focus on powerlifting, then focus on powerlifting—don’t also play basketball five days a week or sign up for a marathon while you’re at it. Just as people training for an Ironman or the Mr. Olympia never stray far from their dedicated training plan, powerlifters focus on their training. (If you’d rather keep up a few different aspects of fitness, it might be smarter to incorporate the “big three” exercises into your existing training without dedicating yourself 100% to powerlifting.)

Distinguish strain from pain. Anyone who’s ever gutted through a 5×5 deadlift workout knows how draining it can be. But “don’t listen to ‘pain is weakness leaving the body.’ Pain is pain. It’s a warning sign,” Collins says. “Do enough to progress, but don’t overdo it for the sake of an Instagram post.”

Do reps the right way. Every gym in the universe has some guy who will insist that he can squat 500lbs., and then half-rep his way through the wimpiest range of motion imaginable. That’s not gonna fly, chief. Make sure you work through a full range of motion as you’re starting, and then work your way up in weights. As far as powerlifting is concerned, Mr. Half-Rep is effectively Mr. No-Rep.

Work with a knowledgeable trainer. You wouldn’t ask a running coach to teach you boxing form, right? Right. As a novice powerlifter, you’ll benefit immensely from having a USA Powerlifting-certified coach who can plan out your training and introduce you to the nuances of the discipline.

Here’s a similar approach that Collins uses for the first four to six weeks of getting an athlete started as a powerlifter.

The program consists of three workouts a week. Each time you come to the gym, you’ll increase the weight on your “big three” lifts. “Most novices can make tremendous progress with 1–1.5 hours of lifting, three movements, three times a week,” Collins says.

It might not sound like much volume, but because powerlifting workouts emphasize big, compound movements that challenge both your musculature and your central nervous system, a three-day-a-week program will pave the way for fast novice strength gains without over-taxing your system.

“We are looking to progress on a daily basis, so each time you come in to the gym, you’re increasing in weight of each movement,” he says. “If you fail, or have two tough days or more, connect with your coach or take a step back.”

On Day 1, you’ll establish your benchmarks in the bench and squat. (Your deadlift starting point will extend from your squat benchmark.) Don’t stress if these numbers aren’t that impressive—it’s only ground zero, and you’ll get better soon.

In other words, rather than establishing a maximum and working in percentages of that maximum, you’re establishing a comfort zone and building from that foundation.

From there, you’ll increase your weight each training session:

– Squat and deadlift: 10 lbs. each day, and then by 5 lbs. once it starts to feel challenging.

– Bench press and overhead press: 5 lbs. each day, then by smaller increments once it starts to feel challenging.

“I like to start off with sets of eight reps,” Collins says. “I know it’s more typical of bodybuilding programming, but it provides a lot of practice with the movement, and allows the beginning powerlifter to build a base (and some muscle) to support sets of five that you’ll do later on. Once you max out on your daily progression, or you start failing at a weight, de-load: Take 10% off your weight and work yourself back up. That should give you enough time to push progress. After about two de-loads, it’s time for a more intermediate program.”

In all workouts, rest 3–5 minutes between sets.

Once you’ve warmed up on your first day (see below), do 10 reps of the squat and bench with an empty 45-lb. barbell. From there, increase the weight each set by 5–25 lbs., depending on what’s comfortable.

Your goal is to ultimately arrive at a weight that you can lift for 8 reps, andconfidently lift at least 3 more times if you needed to. (Collins calls these “reps in reserve,” a variation on the concept of rate of perceived exertion, or RPE.)

WARMUP (DO BEFORE EACH WORKOUT)

3 rounds of the following:

Deadlift: 2 sets of 5 reps (Start at 15 lbs. heaver than your starting squat weight.)

5 ways to maximize your morning routine

EVERYTHING YOU NEED TO KNOW ABOUT PROTEIN