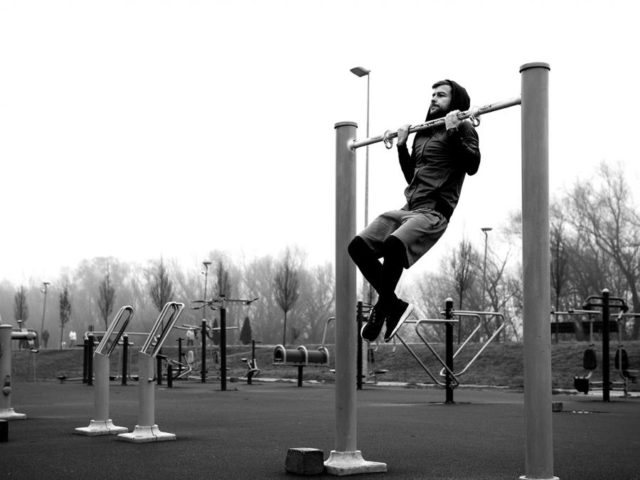 LET’S BE REAL for a second: Every guy wants big biceps. They’re one of the most notorious “mirror muscles” that pretty much everyone loves to sculpt—and show off. Your biceps are actually composed of two muscle groups: the brachii and the brachialis. The former is what connects your shoulder to your forearm, helping you do things like bend your elbow and twist your arm. The latter is more of an assistant, helping the brachii do its job. Long story short, you need to attack both groups to get those guns you want to show off at the beach all summer.

Luckily, you don’t need a ton of equipment or heavy weights to do that. There are lots of great bodyweight moves that will sculpt sick biceps without requiring you to pump any iron whatsoever. The following eight moves, chosen by Equinox Tier 3 trainer Rachel Mariotti, are the best of the best bodyweight moves for your biceps. Some require no equipment at all, but for others you’ll need a pullup bar, resistance band, or TRX. Some target the biceps as the primary muscle but others call other muscle groups in on the action, but will still hone your biceps as well.

Sprinkle them into your regular routine for a few weeks and see results in no time.

“This is a great move as the suspension engages your core,” says Mariotti.

How to do it: Hold the suspension trainer handles, and suspend your body at a 45° angle. Straighten arms with palms facing the ceiling and arms at a 90° angle to the body. Bend your elbows and curl your body up to nearly a standing position.

If you’re not quite ready to do a pullup, this is an “excellent regression to the pullup—working lats, shoulders, and biceps,” says Mariotti.

“This is a great exercise for shoulder and scapula stability—working lats, lower traps, triceps, and, of course, biceps,” says Mariotti. This move actually enages your biceps more so than a pullup.

By switching your grip to overhand, you instantly make the chinup harder by turning it into a pullup. Though you don’t use your biceps quite as much in this version, they still get in on the action—assisting your lats and core.

“This move is great for building grip strength—and it engages the biceps and scaps more than regular chinup,” says Mariotti.

How to do it: Hang a towel around the narrow-grip chinup bars, wrap each side into your hands, and do as many chinups as you can.

Pushups are great for working your chest, shoulders, and core simultaneously. Decline pushups are a great progression—distributing more weight to the front of the body, including the biceps.

“Isometrics are great as your body starts to recruit more muscles. For this particular exercise, that includes your lats, shoulders, triceps, and biceps,” says Mariotti.

How to do it: Do a pullup or chinup, but instead of lowering yourself back down, hold your chin above the bar at the top of the exercise. Hold it for as long as you can, and then as your strength starts to fail, slowly lower yourself down to the ground again.

“This move is great for isolating biceps—and, for eccentric curls, lengthening and strengthening the biceps,” says Mariotti.

How to do it: Grab a low- to medium-level resistance band with a handle on each end. Grab the handles, and step both feet on the center of the band, shoulder-width apart, with arms completely straight and palms facing forward. Curl the band up and release for three seconds.