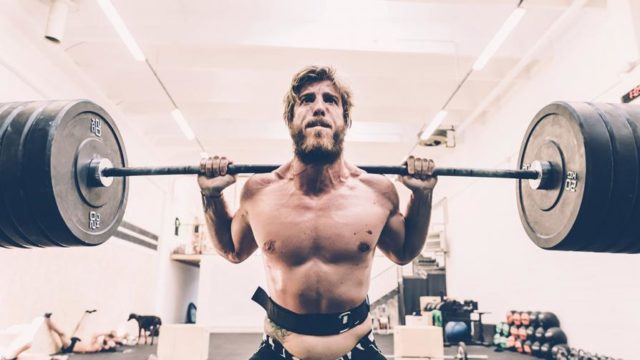 JUST GOING THROUGH the reps in a lift is not enough. Without complete control over your body and the motions of the particular lift on which you’re focusing, you won’t maximize the potential energy your body has to offer. “You want the most stable platform from which to produce force as you can,” Joe Stankowski tells Men’s Fitness. “The more stable the foundation [of your body], the more force you can produce.”

1. Start from the bottom up

Find a way to provide a stable and strong base from which to work. If you’re benching, “clench the bench”. Contract your glutes so that you get a firm hold on the bench. Dig your feet into the ground as well, dialing them outward so that you can get a better grip. The same goes for other lifts like the squat and deadlift. Find a weight to gain greater stability from your feet, and work your way up—focusing on a stiff core and a tight back.

“Squeeze the hell out of the bar,” Stankowski says. “Squeeze the hell out of it like you’re going to crush it. Whether it’s a kettlebell, dumbbell, or barbell, we want to get tight; tightness starts with the grip.” Chalk and grip sprays can also help gain traction and control over the bar. But try to avoid straps and gloves that tend to bunch up and numb the feel for the bar.

Stankowski recommends holding your breath while lifting. Think of it like a slightly deflated ball—when you pump more air into it, it becomes stiffer and more resilient. The same is true with your body. “(Dr.) Stuart McGill talks about this concept of super-stiffness,” says Stankowski, “where you’re using all the layers of your abdominal core muscles, kind of like how plywood has strands that go in opposite directions, layer over layer of these opposing strands, our abs kind of work like that, too. When the overlapping muscles of your core contract, they work together to provide cumulative support. If you inhale, the air pressure from within your body meets the “plywood” resistance of your core muscles, creating a powerful combination of internal and external forces that produces an overall “super-stiffness” in your core, transforming your core into a solid granite base of support.

– Develop a lifting plan, and attack it
– Make a weekly workout routine
– Choose a few select movements and lifts
– Establish variables for those lifts
– Design a path of gradual progression
– Set a goal, and hit it

The key to improving your lift is having a consistent plan of attack that allows you to track specific progression. “Random efforts can only produce equally random results,” Stankowski says. “Develop a template that works for you. I would start by establishing four or five basic movements. Once you’ve got your movements, establish your basic volume—your sets, your reps.”

Approach your workout like a science; don’t go off of gut instinct and feeling. Establish variables and constants that you can gradually tweak and build up. The variables you choose all depend upon what kind of goals you have in mind. For example, you could focus on a mass-building workout by increasing weight in small increments each workout; but maintain a certain number of reps that you do every time. In this instance, the constants are the reps and sets, and the variable is the weight.

Alternatively, you could choose a lift plan that focuses on building leaner muscle. Rather than increasing weight each week, lift the same amount each workout but gradually reduce the rest period in-between sets. This strategy completely changes the game. “Now you’re doing the same amount of work, but you’re doing it faster,” says Stankowski. “This kind of becomes cardio because you’re working different energy systems along the way.” Whatever your workout plan might look like, the important thing to remember is that you want to control your progression with set variables in fixed workouts that gain intensity over time. This is a surefire way to systematically build muscle and strength with easily identifiable causes and effects.

Are you in love? Or are you just lusting after her?