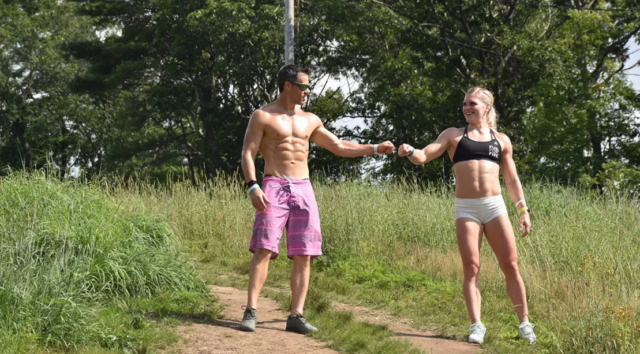 In 2015, when Katrin Davidsdottir started training full-time with Ben Bergeron, a former Ironman turned Level 4 CrossFit coach and owner of CrossFit New England, she could do six ring muscle-ups in a row. That’s impressive for the average athlete, but for a competitor aiming to win the CrossFit Games and become the Fittest Woman on Earth, it wouldn’t be enough.

So Bergeron delivered some harsh news to the talented Icelandic CrossFitter: “You suck at this.”

For the next month, Davidsdottir practiced swinging drills on the rings. “She never elevated,” says Bergeron, meaning that she never brought herself above the rings. She just hung on, shifting from “a hollow position to a Superman, hollow to Superman.” After four weeks, she could do ten sets of ten swings, and Bergeron let her proceed to the next stage: three swings into one muscle-up. “It took weeks for that muscle-up to look good,” says Bergeron, “and then we added a second.”

Slowly, he let Davidsdottir perform the muscle-ups during workouts, but every time she fatigued and started to break form, he’d cut them out again. Now, she can do 15 unbroken. The nine additional reps, though, “were easy part,” says Bergeron. “The hard part was having the humility to say, ‘I need to break this thing down to its bare bones and build it all the way back up again.'”

That road to humility had started on the first day Davidsdottir trained with Bergeron, after she’d moved from Reykjavik to Boston for that reason. As Ben remembers it, “She was missing some lifts that she would normally make. She was a young, immature, emotional girl, and she took off her weight belt, threw it across the room, and yelled out something—I don’t even know, probably in Icelandic—and stormed out the door.”

“What an opportunity for a coach!” he says, still excited by the moment. “I walked up behind her, outside, in the middle of winter in Boston, and looked her in the eye. I waited for her to look me in the eye and said, ‘Katrin, that’s not how we act here.’ You could see her eyes change, her face change, her posture change. And, from that day forth, she was a different person.” At the Games that year, Davidsdottir took first place. (Bergeron also coaches Cole Sager and Brooke Wells, who, at age 22, has already competed in three CrossFit Games.)

Bergeron had sold Davidsdottir on his special brand of humility, which emphasizes how little control athletes have over their destiny, especially at the CrossFit Games. The night before the Games started the following year, in 2016, the athletes found out they’d have to take a 3 A.M. flight from Carson, California to the previous site of the Games. There, they did three workouts, and because the flight home that night was delayed, they got only a few hours of sleep before the notoriously brutal 500-meter open-water swim the next morning.

“There was actually talk among the athletes of boycotting the swim,” Bergeron says. “My athletes are saying, ‘Yes, perfect, this is exactly what we want.’ When it gets hard for everybody else, if you expect it to get hard, it’s an advantage.” Three days later, Davidsdottir claimed her second Fittest Woman on Earth title.

Bergeron often replicates the curveballs that are thrown at his athletes, with tests like dumping them into Boston Harbor in early June, when the water temperature averages 49 degrees, and telling them to swim to shore. “It took a lot of prodding,” says Bergeron. “And when they made it back, they’re all shivering and shaking and high-fiving each other, and I said, ‘Let’s do it again. There was too much hesitation.’ And the next time they did it, everybody just jumped right in.”

For a coach who focuses so intensely on humility, perhaps it’s unsurprising that Bergeron is his own fiercest critic. (“I suck as a coach,” he says, without a hint of false modesty. “Like, I’m so far from where I want to be it’s ridiculous.”)

Leading up to the 2017 Games, he throttled back the intensity of Davidsdottir’s workouts. “I thought that she was talented enough and competitive enough and mentally strong enough that if we could get her to the Games healthy, she’d win,” he says. “And she was. She didn’t have a ripped callus all year long.”

But, as soon as he got to Madison, he realized he’d been too conservative. “I was wrong,” he says. “You can’t compete with the best in the world without putting your foot on the gas pedal and holding it down as hard as you can, all year long.” Davidsdottir took 5th place.

This year, Bergeron and Davidsdottir are erring on the side of overtraining, but finding the right intensity is still a struggle. “We measure her recovery, we do blood analysis, we do sleep analysis, we do heart rate analysis,” says Bergeron. “So I’m not just saying ‘caution to the wind’ and smashing her to bits. But we’re on a knife’s edge, and we’re constantly teetering on cutting ourselves.”

A month ago, Davidsdottir finished the CrossFit Open first in her region, and in mid May, it’s expected that she’ll qualify for the Games, which would be her sixth appearance. Once she gets to Madison in August, though, it’s impossible to predict what will happen. Last year, the top five women were separated by less than 10 percent of the points, showing just how competitive the field is. If Davidsdottir does manage a victory, she’ll become the first woman in history to claim three Games titles. It would be a monumental, and somehow unsurprising, achievement for both her and her coach. Still, it’s easy to imagine Bergeron leaving the arena with the same mindset he has now: breaking the next challenge down to its bones, and having the humility to move forward from there.

Want to train like one of Ben’s athletes? Try the following workout:

Your score is the total number of reps completed across all three rounds.

Downing beetroot juice before a workout may be a boffo way to boost brain...

5 QUICK WORKOUTS TO GET RID OF BACK FAT