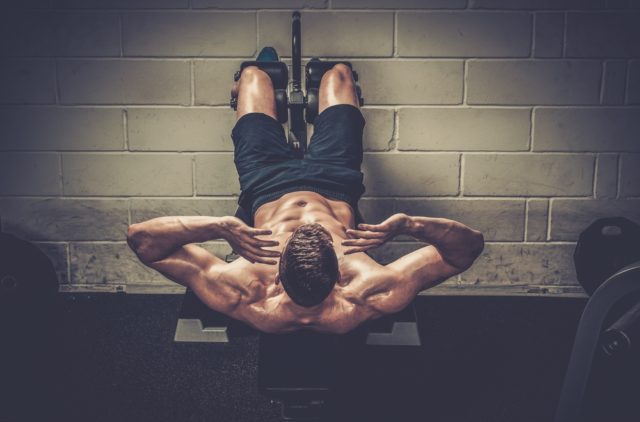 It’s time to dispel some training myths people like to throw around in the gym. Being able to separate fact from fiction is important to help young trainees learn from the beginning how to properly plan their programs and move in the right direction. Wasted time and energy only serves to discourage people from continuing to pursue their fitness goals, which is something we work hard to prevent.

These are six workout myths we hear a lot, and they seem to make sense so a lot of people accept them as gym wisdom without question. The truth is, training is different for everyone, and nothing should be accepted as a hard and fast rule. And these supposed “facts?” They’re pure fiction.

This is simply not true. Twenty years ago I was far stronger than I am now, but not nearly as big and muscular. While it’s certainly important to try and push greater poundage as you move along in your training, this isn’t the only factor necessary for inducing hypertrophy. Gaining strength is often a function of practicing and getting better at a particular exercise, which is more of a neuromuscular adaptation than anything else. Truth be told, becoming too efficient at lifting a weight can actually be counterproductive to forcing muscle growth.

If you’re constantly doing the same exercises, your CNS (central nervous system) may begin to get so good at performing the movements that less muscle fibers will need to fire in order to move the weight. That’s the opposite of what we want. Another thing to consider is that strength gains are finite and will eventually plateau. Of course, I’m not trying to tell you to stop yourself from getting stronger, but know that hypertrophy is not solely reliant upon pushing heavier weights workout to workout.

You can also stimulate gains in mass by improving your mind/muscle connection, getting more work done in the same period of time, introducing novel training techniques, switching up lifting tempos, varying repetitions, and altering angles, grips and planes of motion.

Myth #2: Exercises like cable crossovers and leg extensions create striations in the muscle.

No exercise, no matter how strong the peak contraction, whether machine, cable, barbell, or dumbbell is going to actually create striations in a muscle. This is entirely a matter of genetics, similar to bone structure, muscle shape, muscle origin/insertion, and vascular formation.

You can put two equally developed bodybuilders next to each other, both with body fat in the low single digits and subcutaneous water levels at a point where the skin is paper thin, and while one might show wicked cross striations throughout their physique, the other may display little to none. In other words, those deep grooves that Kai Greene has all over his massive quads were there when he was born, and were not created through doing thousands of sets of leg extensions.

All resistance exercises contribute to muscular development in their own unique way by stimulating various motor unit pools and taxing specific sets of fibers—but none are directly chiseling in the deep striations seen on some competitive bodybuilders. Build your own physique and diet and you might find that you have highly visible striations in your chest from delts to sternum, whether or not you have never done a single cable crossover in your life.

Myth #3: Use heavy weight and low reps for mass and light weights and high reps for definition.

It would be great if it was actually that simple, but unfortunately it’s not. The truth is that building muscle is a complex process and a function of many physiological mechanisms that collectively ignite our anabolic pathways. In order to maximally stimulate all of these mechanisms we must present the muscles with a variety of stimuli, which means variations in rep ranges, training techniques, lifting speeds, and more. In other words, heavy weights do assist in building bigger muscle, but so do medium and light weights. The key lies in giving your body the proper dose of each and not relying on a one-dimensional approach.

As for muscle definition, this is something that comes from achieving a body fat percentage of about 10 percent and lower (obviously the lower you get, the more definition you’ll have). Lifting lighter weights for high reps is certainly not going to be solely responsible for making this happen as some people seem to believe. Only a sound nutritional regimen coupled with consistent cardio workouts and intelligent supplementation (in conjunction with your resistance training program) can push the body to rid itself of fat through increased calorie burn and a higher metabolic rate.

Myth #4: Using resistance other than body weight during ab training will thicken your waist.

Early on in my competitive bodybuilding career one of my main weaknesses was my abdominal region. While my waist was tight and narrow, my actual ab muscles were not as prominent as they needed to be. Up until that time I trained my abdominals with body weight only, and would usually do sets of about 40 to 50 reps before failure would occur. I knew that in order to reach higher levels in bodybuilding competition my abs would need to become thicker and more developed.

Despite not wanting to lose the advantage of such a small waist I decided to begin treating my abdominal workouts in the same manner as I would other body parts—targeting between eight and 15 reps per set. Now my abs received the same treatment as other muscles, with weighted crunches and leg lifts, never going over 20 reps, and most often failing at around 10 to 12. A year later I stepped onstage at my next competition seven pounds heavier with the same 28-inch waistline and grooves between my abs thick enough to hold a quarter.

While I would not recommend doing weighted side bends (which will greatly thicken the obliques), there is nothing wrong with training the rectus abdominis like other muscle groups if you are after maximum development.

The reason I hate this myth is because it can prevent aspiring bodybuilders and athletes from utilizing an excellent chest-building exercise. No, it’s not the use of this particular movement that causes pectoral tears and rotator cuff injuries, but the misuse of it. Unfortunately, the bench press has become the most popular measure of strength, which causes lifters to focus far too much on how much weight they can lift rather than doing the exercise with proper form and execution.

If you treat the bench press with respect by moving the bar slowly on the negative (no bouncing off the chest), using a proper ROM, keeping most sets in a range of eight to 12 reps (stop doing max singles every workout), warming up properly, and setting the torso in the correct position throughout (chest held high, shoulders shrugged down and back, slight arch in lower back, feet planted on the floor) then there will be far less potential for injury and far more potential for an Arnold-like-chest.

Myth #6: You can’t build big legs without barbell back squats.

There’s no doubt that the basic barbell back squat is an amazing exercise for building mass and strength in your quads. Some of the biggest legs in bodybuilding were created with this movement as the foundation. However, most people who swear by barbell squats also happen to be perfectly “built” for the movement, so proper form comes easily and most of the work is effectively done by the quads. For many others, however, this exercise is awkward and uncomfortable and results in more lower back and gluteus stimulation than anything else—no matter how carefully each rep is executed.

Using myself as an example, I worked very hard on perfecting barbell squats in my first 10 years of training, eventually working up to sets of 10 to 12 deep reps with 405 pounds and no knee wraps (not much weight for some, but for me was substantial). Did my quads get huge from this? No. They got bigger for sure, but I would say that my glutes always grew disproportionately, while my lower back took quite a beating. It wasn’t until I switched over to hack, sissy, and machine squats, as well as various leg presses, that my quads began to take on significant development.

The key was that I was able to feel these movements more in the target muscle and put far more mental focus and intensity into every rep. I recommend every trainee give the barbell back squat a fair chance. Work hard and long on perfecting them and then honestly assess whether they are effective for you or not. Just do not let anyone tell you that you cannot build big legs without them. The secret to massive quads comes down to guts, heart, focus, consistency, and hard work more than what kind of squats you do.