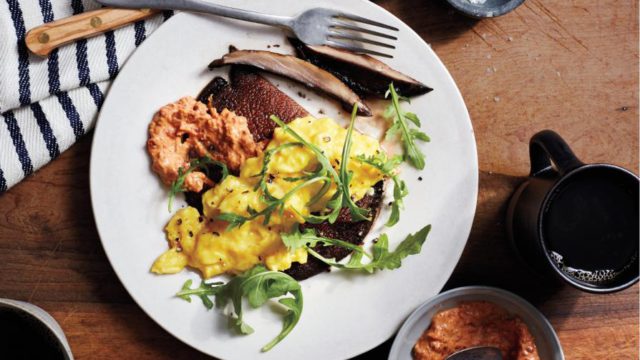 MAYBE THIS IS just an American thing, but no meal seems more controversial these days than breakfast.

The debate has raged for decades: Should eat breakfast every day? Can planning out the timing of your meals help you be healthier? Past studies seem to go both ways one the subject—and some people just don’t like to eat in the morning.

But here’s a new volley of evidence: Doing both can help reduce risk of cardiovascular disease, the leading cause of death for men and women in the U.S., according to  a new statement from the American Heart Association.

In their new set of recommendations, researchers scoured all recent scientific evidence available on people’s eating patterns and their subsequent cardio- metabolic health—a term that includes heart disease and metabolic disorders like diabetes. And a few of their findings were no-brainers—loading up on fruits, veggies, whole grains, low-fat dairy, poultry, and fish while limiting red meat and salty and sugary foods is still good for you—they also found that how and when you eat is also important.

The researchers found that those who regularly eat breakfast have a lower risk of heart disease, and that the estimated 20–30% of people who skip a morning meal are more likely to be obese and have diabetes. The studies they looked at also suggested that eating earlier in the day is better for heart health, and that the body’s metabolism is more dynamic when the sun is out, which is when food and nutrients are better processed by the body. They also noticed a connection between intermittent fasting—every other day or 1–2 times a week—and weight loss in the short term.

“Meal timing may affect health due to its impact on the body’s internal clock,” said Marie-Pierre St-Onge, Ph.D., writing group chair and an associate professor of nutritional medicine at Columbia University in New York City. “In animal studies, it appears that when animals receive food while in an inactive phase, such as when they are sleeping, their internal clocks are reset in a way that can alter nutrient metabolism, resulting in greater weight gain, insulin resistance, and inflammation. However, more research would need to be done in humans before that can be stated as a fact.”

In the meantime? Here are a few no-brainer breakfasts that even the busiest dudes can whip up.