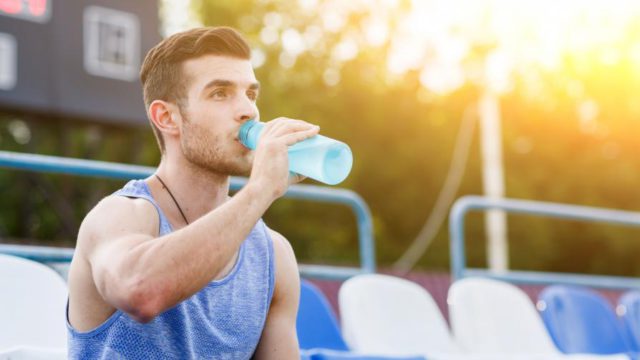 IF YOU’VE EVER played a sport, you’ve probably chugged an electrolyte-replenishing (and likely sugar-laden) sports drink at some point. Every athlete knows that electrolytes are important, but few know the specifics of their function.

The American Chemical Society and PBS explained the importance of electrolytes and their function, and gave their take on whether that post-game chug is as replenishing as it feels.

Electrolytes are actually salts, including table salt, that conduct electricity in water by separating into positive and negative charges, the video explains with the help of some handy animations. Cell membranes control the flow of positive and negative charges, and water follows the electrolytes. There has to be a balance between electrolytes and water for cells to function properly. Without that balance, cells could either shrivel up and die or become too full and burst.

Electrolytes also control nerve impulses in the body by sparking the constant electrical impulses that keep the body functioning. Without them, your heart, lungs, and brain would stop working.

If all of the science sounds a bit complicated, the takeaway is that getting enough electrolytes is definitely important not just for athletic performance, but also for your general well-being.

That being said, the fact that they’re important doesn’t necessarily mean you have to turn to sports drinks to obtain them. You lose electrolytes when you sweat, but you can likely replenish them without the help of a sports drink.

As the video explains, most people get a sufficient amount of electrolytes from their diets to replenish those lost during workouts, and good, old-fashioned water can keep you sufficiently hydrated during a typical workout. It’s also become common knowledge that many sports drinks are loaded down with sugar, which isn’t ideal.

The bottom line is that athletes doing long and intense workouts (think running a marathon), may find that sports drinks can be helpful. For the rest of us, food and water will do the trick.

IS IT OKAY TO EAT A MEAL CLOSE TO WHEN I GO TO BED?

Fast food hits your immune system like an illness, a new study suggests

10 Sex Positions She Wants You To Stop.

HOW TO TRAIN TO FAILURE FOR MAXIMUM MUSCLE GROWTH