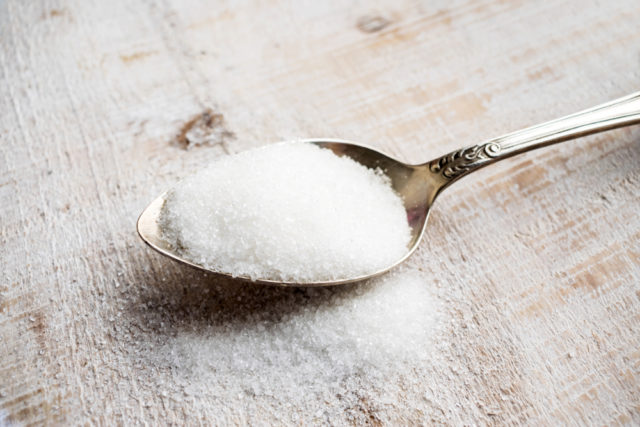 Take a glance at nutrition facts of your favorite protein bar, and you may notice that is has virtually no sugar or carbs, yet it tastes like a candy bar. If you’re wondering how these products taste like cake batter without the sugar you’d find in actual cake, the answer is likely erythritol.

This relatively new sugar alcohol is naturally found in some fruits, vegetables, and fermented foods, and it’s being commercially produced to stand in for sugar in packaged foods. Because erythritol is found in some whole foods but also being used as a food additive, one has to wonder whether it’s good for you or if it’s another ingredient to add to your “do not eat” list.

WHAT IS ERYTHRITOL, AND WHERE CAN YOU FIND IT?

“Erythritol” is a type of carbohydrate called a sugar alcohol, which is a water-soluble compound that naturally occurs in many fruits and vegetables,” according to Kris Sollid, R.D., senior director of Nutrition Communications at the International Food Information Council (IFIC) Foundation.

The erythritol that you’ll find in some of your favorite low-calorie packaged foods—think ice creams and protein bars—is “a man-made additive derived from the fermentation of wheat or cornstarch, which creates a crystalline product similar to sugar,” adds Elizabeth Shaw, M.S., R.D.N., C.P.T., a nutrition expert and author at ShawSimpleSwaps.com.

Since erythritol can technically be considered “natural” and is sweet without adding calories, it’s no wonder that many food manufacturers have adopted the ingredient. If you’ve tried low-calorie ice creams or drinks that are super sweet sans calories, it’s likely you’ve had erythritol. You can even buy a bag of erythritol to cook or bake with at home.

WHAT ARE THE BENEFITS OF EATING ERYTHRITOL?

WHAT ARE THE DOWNSIDES?

Unfortunately, the research on erythritol and weight is mixed. On one hand, erythritol consumption has been associated with obesity in young adults. Yet, other research suggests that eating erythritol may delay gastric emptying, meaning it keeps you full long after a meal and may reduce appetite throughout the day.

Another downside for some people is digestive issues if the sweetener is consumed in excess. “Though a majority of erythritol isn’t digested, the portion that finds its way to the colon may cause some digestive discomfort in some individuals when large amounts are consumed,” according to Shaw. Sollid also notes, “While the safety of erythritol and other sugar alcohols is well-documented, symptoms of gastrointestinal distress have been noted with excessive intakes.”

IS IT SAFE TO EAT?

Erythritol is an FDA-approved sweetener, and The Academy of Nutrition and Dietetics states that consumers can safely enjoy it in conjunction with a healthy eating plan. “If you’re curious, try it and be mindful of your portions (don’t eat an entire pint of ice cream),” Shaw advises.

How to improve your form by changing your focus