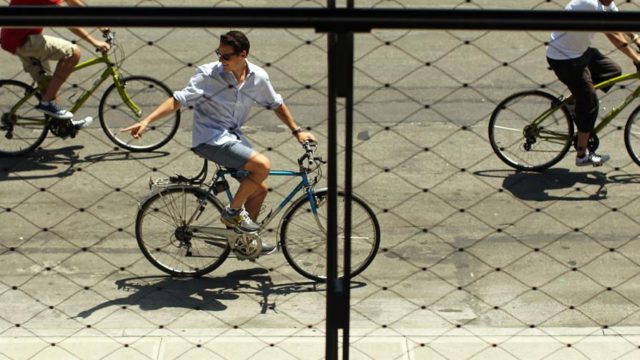 IF YOU LIVE close enough to ride a bike to work, consider yourself fortunate and blessed—that is, as long as you don’t live in a suburban or rural area where crazed kooks think it’s their duty to toss trash at you because cyclists are “hogging” the road.

Barring that mess, a new study from the University of Glasgow in Scotland has found that people who cycle to work have a 45% lower risk of developing cancer, and a 46% lower chance of getting heart disease. The study, which covered over 250,000 people in Britain with an average age of 53, also found that cycle commuters were associated with a 41% lower overall risk of early death. And for those not into the two-wheeled conveyances, the study also showed that simply walking to work can lower the risk of cardiovascular disease by 27%, which researchers speculated was not as great because of the lower average distance traveled by walkers and the relative lower intensity compared to cycling.

“Cycling all or part of the way to work was associated with a substantially lower risk of adverse health outcomes,” said study co-author Jason Gill, M.D., from the university’s Institute of Cardiovascular and Medical Sciences. “Those who cycled the full length of their commute had a greater than 40% lower risk of heart disease, cancer, and overall mortality over the five years of follow-up.”

If you do live close enough to work and aren’t taking advantage of the short commute to either walk or ride at least a few times a week, shame on you. Get a bike—or some solid walking shoes—and get your ass out of the car, and you can improve your health every day without even having to hit the gym.

Plagued by lower-back pain? Here’s how to fix it, according to a movement specialist.