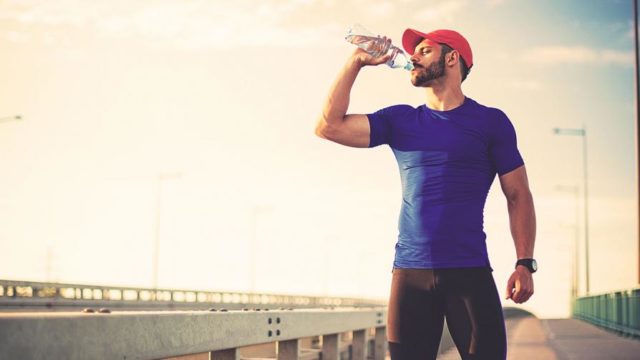 BY NOW YOU may have heard that the 8×8 water rule (8oz, 8 times a day) has been debunked. The truth: It’s basically an arbitrary guideline that dates back to 1945, and there’s no real science behind it.

Feeling duped? Don’t—it turns out the science surrounding water isn’t all that advanced in 2015, either. “Water is absolutely crucial for the body, but it’s a forgotten nutrient in science. We don’t have the best tools for measuring how much we drink, and so the literature around hydration is about as advanced as smoking research was in the ’70s,” says Stavros Kavouras, Ph.D., an associate professor at the University of Arkansas who studies hydration.

Here’s what researchers have sorted out: water (which makes up around 50-60% of your insides) cushions and lubricates your joints, and keeps the body running by regulating body temperature, aiding digestion, and eliminating waste through sweat and Nos.1 & 2. (Still, 37% of adults drink fewer than three cups a day, and 7% don’t drink any water, according to the CDC.) There are a few other critical, science-backed reasons we’re on team hydration, too:

A new study published in the journal Obesity found that overweight adults who drank 16oz of water before every meal lost around 9lbs over 12 weeks, which was more than those who didn’t drink any water. (The extra H2O made them feel fuller.) And that makes this about the easiest diet ever.

Being dehydrated by as little as 1% can lead to headaches, fatigue, a bad mood, and trouble focusing, according to a study of young women published in the Journal of Nutrition. (Yep, sounds like a hangover.)

3. It protects your kidneys

The kidneys are one of the first organs to really cry out if you don’t hydrate, says Kavouras. Research—including a 2011 study from the University of Australia—has found that those who drink more water are less likely to have chronic kidney disease.

So the question remains: “If not eight glasses, then what?” The (completely unsatisfying) answer is that everyone, and every day, is different when it comes to proper hydration, says Kavouras. “If you’re sweating and the AC is broke and you worked out earlier, you’re going to need more water than on a day when you’re sedentary in a room pumping cold air.” Age, weight, and climate all play into your needs. But as a rough guideline, The Institute of Medicine estimates that men and women need around 3.7 and 2.7 liters of water a day, respectively, which includes all the water you get from food and other beverages. (Most people get around 20-25% of their water intake through food.) The best (and oldest) trick in the dehydration book is to look at the color of your pee. Anything darker than a light lemonade color means you’re in need of some H2O.

Just Broke Up With Your Girlfriend? Hit The Gym.