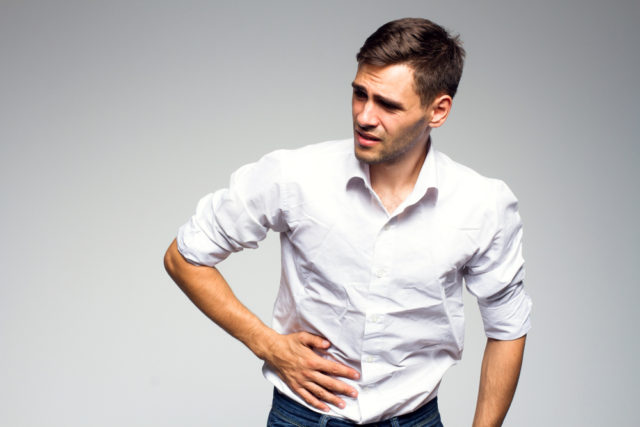 When your belly feels bloated, no one can see all the hard work you put in at the gym this week. Even if you ate “mostly” clean, trained, intermittent fasted, and took all the right supps, certain foods and drinks can cause your belly to poof out. Your jeans feel tighter, you’re moving the belt notches out in the opposite direction, and you don’t feel like your energetic self.

Here, the Nutrition Twins, Lyssie Lakatos, R.D.N., and Tammy Lakatos Shames, R.D.N, reveal those foods that cause belly bloat, disrupting your digestive track and making you feel like Violet turning into a blueberry. in Willy Wonka and the Chocolate Factory.

They may be a great companion for a football game, but these snacks are packed with sodium, which means that your body has to draw on its water sources to dilute the salt, which leads to bloat, says Lakatos Shames.

Reason 1,378 to stop drinking diet soda(okay we made that up, but you get it)—it’s carbonated, which means it contains carbon dioxide, a gas.  Some of the gas gets trapped in the digestive tract, causing bloating, says Lakatos. Keep in mind that the same is true for seltzer. While sparkling water is a better-for-you option, chugging tons of it can also lead to bloat.

Switched to a new protein bar recently? If it contains sugar alcohols or soy products, it could be the reason your belly isn’t flat. In some people, these ingredients cause bloating, gas, or even.—yikes—diarrhea. While we aren’t saying you need to ditch all protein bars or snack bars, if you feel bloated after eating one that contains these ingredients, it’s time to swap products. Phrases to look for include: “sorbitol” or “mannitol” or “hydrogenated starch hydrolysates” for sugar alcohols (words that end in ‘tol’) and anything that says “soy” as well.

Sure, this is touted as a healthy grain, but if you’re not used to eating a lot of fiber, barley may cause bloating, says Lakatos Shames. “Start with small amounts until your body adjusts,” she says. Also, barley contains gluten, so be on the lookout if you’re sensitive to that as well.

These veggies make plenty of dishes taste better with their sharp flavor, but keep in mind that onions also contain fructans, which are soluble fibers that can lead to bloating, says Lakatos. “Raw onions seem to cause more bloating than cooked ones, so try them cooked if eating raw onions causes a problem,” she said.

“Found in the majority of pastas, breads, tortillas, wraps, pancakes, and cakes, wheat can cause bloating for those people who have a gluten sensitivity or gluten intolerance,” says Lakatos Shames. Remove it from your diet for a month, then add it back in slowly to see if it causes a bloating reaction. If your body responds by poofing up, you might have a gluten sensitivity. Visit your doctor for tests to be sure.

We know, it seems like we’re slowly taking away your lunchtime sandwich—first onions, then wheat, now lunchmeat. “It’s super salty, which means the body will have to make the salt less concentrated by pulling the water into undesirable places, like the belly to dilute the salt,” says Lakatos. So if you’ve got a hot date tonight and want to have a flatter belly, swap that bloating hero for a salad.

You’ve probably experienced the bloating (and belching) caused by beer, but it’s worth reminding you as you head to happy hour the evening before a beach day. Beer’s carbonation is made from fermentable carbs and carbon dioxide, which both cause bloating, says Lakatos Shames. “Many beers also contain gluten, so if you’re sensitive to it, it will make you feel bloated,” Shames said.

When you indulge in this Israeli specialty made of fried chickpeas or fried fava beans, you might feel virtuous for having a vegetarian-based protein. But then your belly could feel gassy or bloated a few hours later, due to the chickpea’s fiber content and salt.

6 HABITS EVERY HIGHLY EFFECTIVE LIFTER SHOULD HAVE