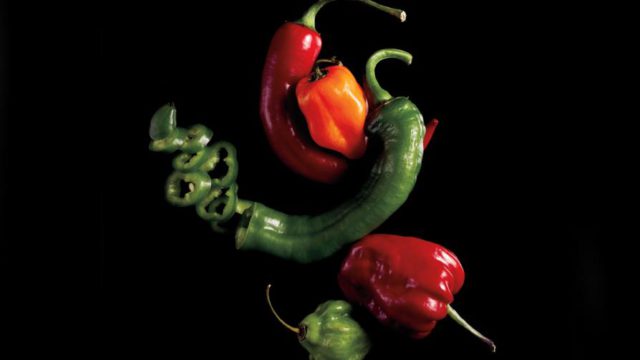 SUPER-SPICY PEPPERS AND crippling hot sauces are having a heyday. But while fire-breather types have long boasted of the health-boosting and fat-burning benefits of the fruits, but not many studies have tested their health-promoting benefits—until now.

Hot peppers may actually help you live longer, according to a new study published in PLoS ONE. The researchers studied data on 16,000 Americans from the National Health and Nutritional Examination Survey who were followed for 23 years, and discovered that the people who tortured themselves to the strains of hot red chili peppers reduced their risk of dying from heart disease or stroke by 13%. Study authors aren’t quite sure why this is, but they speculate that main ingredient capsaicin could effect the gut bacteria population for the better, or that the compound could affect the cellular mechanisms that regulate blood flow and prevent obesity.

Of course, that isn’t the only reason to enjoy them. Despite their absurdly intense heat, mad-scientist pepper breeds like the Carolina Reaper—which, at an astounding 1,500,000 Scoville units, will absolutely vulcanize your mouth and pretty much the rest of your intestines—are more popular than ever, partially because eating them triggers a flood of endorphins. (Or maybe it’s the car-crash spectacle of watching someone eat them and lose their mind on YouTube).

The takeaway for your takeout order? To maximize the benefits of capsaicin, previous studies experimented with about 2.5 grams of hot peppers per day, which is about a quarter of a medium pepper. You can also use cayenne supplements at about a 1 gram dose three times a day—but start off with a light dose, since this is straight-up hot pepper we’re talking about.

How a ripped guy works out