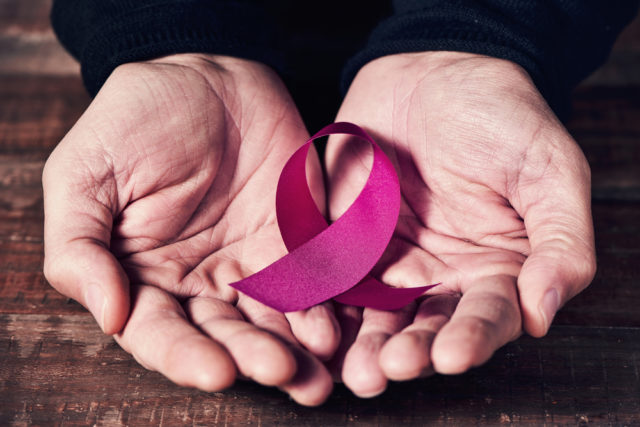 October marks Breast Cancer Awareness Month, and although the disease is less common for men, it’s still something that we should know about and have on our radars.

The American Cancer Society includes everything from a lump or swelling, to the puckering of one’s skin, nipple retraction, nipple discharge, and redness or scaling of the nipple or breast skin as possible symptoms for breast cancer in men. They also warn that sometimes breast cancer can cause a lump or swelling under your arm or around your collar bone, signaling it has spread to your lymph nodes.

A noticeable size difference of one’s breast is the obvious change that men should look out for when attempting to detect breast cancer early. But even then, it can be a bit tricky for a man to detect himself. “Because men have very little breast tissue, it is easier for men and their health care professionals to feel small masses (tumors). On the other hand, because men have so little breast tissue, cancers do not need to grow very far to reach the nipple, the skin covering the breast, or the muscles underneath the breast,” the American Cancer Society wrote on its website. “So, even though breast cancers in men tend to be slightly smaller than in women when they are first found, more often have already spread to nearby tissues or lymph nodes. The extent of spread is one of the most important factors in the prognosis (outcome) of a breast cancer.”

The shower is a great place for men to do a self-breast exam, according to VeryWellHealth.com. With your pecs lathered in soap, the website recommends raising your left arm over your head and placing your left hand on the back of your head, before using your right hand’s index, middle, and ring fingers to check your left breast and nipple for any lumps and swelling or drainage, respectively. Then, switch to your left hand for your right breast. This self-test should be scheduled on the same day as your testicular self-test, as 9,310 new cases of testicular cancer are estimated for 2018, with about 400 of those resulting in death, according to the American Cancer Society.