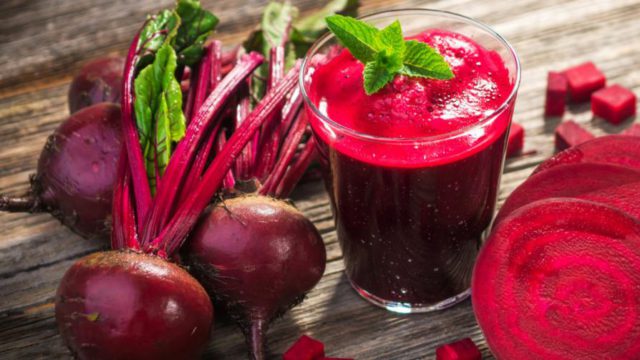 BRIGHT-RED BEETROOT JUICE has been found in a bevy of recent studies to provide a bunch of great benefits like increased stamina and improved blood flow, and lowered inflammation, high blood pressure, and heart disease risk. This root veggie is linked to these healthy outcomes because it’s filled with nitrates, which are transformed by the body into nitric oxide, a chemical compound that is imperative for good blood flow and a properly functioning metabolism.

Researchers at Wake Forest University recently published a study in the Journals of Gerontology that explored how well the juice of the vegetable can help with brain functioning in older adults. For the study they assembled 26 men and women who were 55 or older who were couch potatoes with high blood pressure and took drugs to help regulate it. The scientists gave them a beet juice supplement called Beet-It Sport Shot three times a week for six weeks before taking a moderately intense walk on a treadmill for 50 minutes. Half got the real deal, the other half got a bunk Beet-It with low levels of nitrate.

The 6 greatest fat-torching outdoor workouts of all time

After a dark and cold winter, the fluorescent-lit gym starts to feel as…

They found that those who received the nitrate-rich shot of beetroot juice had improved brain functioning after the shot and exercise—similar to the way a younger brain works—compared to the subjects who just exercised and didn’t get the nitric oxide boost. “Nitric oxide is a really powerful molecule,” said study co-author W. Jack Rejeski. “It goes to the areas of the body which are hypoxic, or needing oxygen, and the brain is a heavy feeder of oxygen in your body.”

Exercising is thought to bolster the somatomotor cortex—an area of the brain that deals with information from the body as it moves and processes muscle activity—and, since beet juice helps with blood flow, even more oxygen may get to the brain when it is combined with working out.

Sex is getting wilder these days—but not safer, unfortunately

Burn It: How To Purchase Your Dream Car.