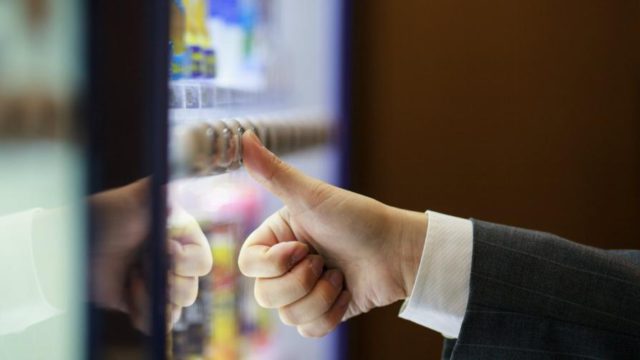 YOU KNOW THE scene…it’s 3 p.m. in the office and a trickle of people are starting to meander past your cubicle on the way to the vending machine for a late-afternoon junk food binge. Chips and pretzels and candy bars are the usual suspects, with those precious few co-workers with some semblance of a healthy conscience going for a bag of nuts or some trail mix.

But what if your vending machine was able to subtly mess with your mind and make you go for the nutritious stuff every time? That’s what a group of scientists at the Rush University Medical Center in Chicago decided to find out—playing off past research which has shown that delayed gratification is decidedly not a human strong point.

For the study, they created a new system called DISC—or Delays to Improve Snack Choices—that forces the consumer to wait for 25 seconds if they select junk food. A countdown is visible, and, as the numbers tick away, people are also given the choice to change their selection to a healthier option.

“This delay yielded a 2% to 5% increase in the proportion of total purchases from healthy snacks,” said lead author and clinical psychologist Brad Appelhans, Ph.D. “Also, we found that the delay did not harm total sales volume or vending revenue, which is important to vending machine operators.”

Researchers studied over 32,000 snack sales from vending machines and noted that the DISC system was color-coded with the healthier snacks clearly labeled and featured prominent signs indicating that the less-healthy food would drop after the 25-second delay.

The nutritious food needed to meet five of seven standards to be included in the machine—fewer than 250 calories per serving, 35% or fewer fat calories, no more than 350mg of sodium per serving, no trans fats, less than 5% of daily value of sat fat per serving, over a gram of fiber per serving, and a limit of 10 grams of added sugar per serving.

“Our findings with the DISC vending machine system suggests that relatively brief time delays can nudge people to purchase healthier snacks at least some of the time. The beneficial effect on snack choice is about as large as that seen with discounts, but unlike discounts, time delays do not harm the total revenue of vending machines,” said Appelhans. “This could be a viable option for vending machine owners to offer good, healthy snack options while keeping their sales and avoiding out-of-pocket costs.”

If your current vending machine is filled with too many junk food options, try talking to management to get some healthier options in until the day when the machines are able to make us do their healthy bidding, or try making a batch of better snacks like these and bring them with you to work.
by Adam Bible