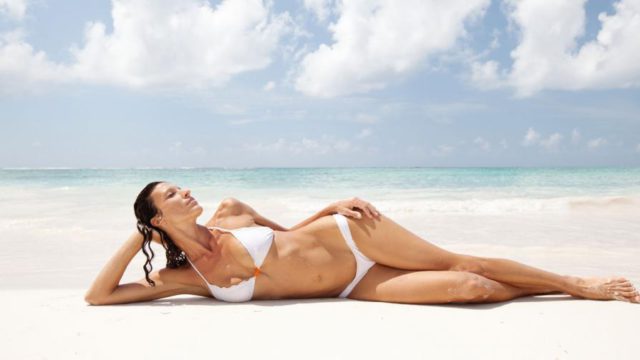 YOU LANDED YOURSELF a smokin’ hot girlfriend. It’s like she was pulled from the inner machinations of your mind—a fantasy. Congrats!

The only problem? She’s a little too keen to let everyone else know it, too. She posts at a fast-clipped pace—Instagramming her yoga-pants-clad butt mid-workout, uploading a car selfie that’s more chest than face (chestie?) on Facebook, rounding out the day with a Snapchat story of her fresh from the shower. Her intentions could be harmless, but that doesn’t mean your brain doesn’t short-circuit every time you see the post and the barrage of strange guys dropping fire emojis and who knows what else in her DMs.

You want it to stop, but have no clue how to broach the subject. You don’t want to go in guns blazing any more than you want to head into nuclear warfare with a water gun.

1. Understand how her sexy social media posts make you feel

Few men ever talk about this, but you need to figure out why you’re upset because of your girlfriend’s pictures. Talk to a close friend or even a therapist to act as a neutral sounding board. Specifically, describe the situation and the emotions it’s conjuring.

Some hypothetical questions: “Do you feel turned-on? The need to be controlling? Insecure?” Sherman says. And do you know where these feelings are coming from? “If you’re feeling jealous or insecure, you could be worried you’re not enough for her and she’s needing the attention of others,” Sherman explains. If you’re feeling protective and angry, that could be a reflection of your values regarding “privacy, boundaries, and sexuality—as well as fear of outside judgment,” she adds.

This situation is tricky. She could have a few different reasons for all her online posting. Moreover, she may not be honest with herself (and/or you) as to why she’s posting what you deem to be inappropriate photos on social media.

First, the obvious: “She might need attention and is flaunting her sexuality to get it (which may not be about you, but can still affect you),” Sherman suggests. Maybe it’s her form of self-expression—which is to say, she sees nothing “scandalous” about the photos. (Remember, that’s a judgment call.) Or maybe it’s just part of her job (is she a model, spokesperson, or advocate for commercial platform?).

“You can’t assume her feelings or motives unless you ask, but you can intuit where she could be coming from instead of only considering your own feelings,” Sherman says. If you’ve seen some red flags that indicate she’s a bit insecure and seeks constant validation from you in order to feel content, that could point to her motives. If she has a strong understanding of who she is and is unwavering in her self-confidence, her posts can merely be an extension of that. If she’s a little immature relationship-wise and hasn’t had many serious relationships in the past, she might not consider how her posting could impact you.

All (and more) of these could be possibilities. It’s up to you to figure out which applies. And that brings us to our next point:

3. Approach the touchy subject without being confrontational

“Express your feelings using ‘I statements’ rather than making her the person in the wrong and attacking her,” Sherman says. If she posted a photo in a skimpy bikini or in a revealing top, try something like: “‘I felt uncomfortable seeing you in something so revealing on a public forum. I thought that was just for me,'” Sherman suggests.

The more you pivot around your feelings, the more open she’ll be to hearing them out. “Never say something volatile or judgmental like: ‘I don’t want my friends and family to think I’m dating a whore’ or ‘How dare you post inappropriate pictures like that. You’re my girlfriend.'” You’re completely out of line to suggest she belongs to you, or that her pictures suggest sexual promiscuity. She’s free to make her choices (and that includes breaking up with you).

This goes back to step two: Figuring out why she’s posting those photos in the first place. That way you can hone in on the core issue here—navigating your different attitudes about sexuality and propriety on social media.

Even if the two of you untangle her motives for being a little racy on social media as being innocent (say, she lost a ton of weight and wants to show off her hard work), you might still feel strongly about her toning things down a bit.

Sherman suggests: “You could say something like, ‘I know it’s your body and this is ultimately your decision, but I’d really appreciate it if your sexuality was only directed toward me and vice-versa. How would you feel about that boundary? Is that a deal-breaker for you?'” In the grand scheme of things, fine-tuning her pictures to be more PG should be a fairly simple compromise for her if your relationship is one of her top priorities. But if she pushes back and has no intentions to do so, you’ll have to confront a different question:

5. Decide whether her choice to continue posting racy photos is a deal-breaker

If she refuses to stop, then you need to dissect this situation to see if there’s a bigger, more deep-seated issue. The scandalous pictures are just a smaller window into a bigger conversation about how you feel toward each other. “This is a matter of respecting one another, finding areas you can compromise on, and seeing whether you have enough shared values to last,” Sherman says.

If your relationship is already on rocky foundation—you feel she’s not committed to you, your communication is poor, and you don’t feel like an equal in the relationship—then you need to decide how much this issue threatens your trust. This could signal larger problems in your relationship, and it’s best to figure out these flaws sooner rather than later.

5 THINGS TO KNOW ABOUT ZINC