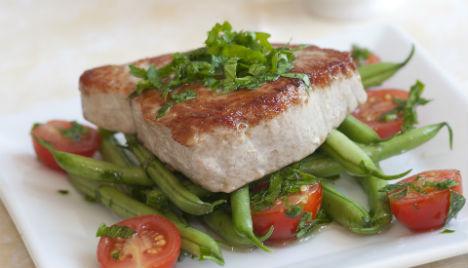 THERE’S A REASON a can of tuna is your go-to protein food. (And if it’s not, then maybe it should be.) Not only does one 3.5-oz serving pack 30g of lean protein, but it’s also one the easiest and most accessible fishes. Plus, tuna gives you a decent dose of potassium, B12, and selenium—an antioxidant necessary for thyroid metabolism and boosting immunity, says Robyn Youkilis, a nutritionist and healthy cooking expert.

So tuna is good for you. That’s been established. But what do you need to think about at the grocery store? Standing in a sea of cans, jars, and steaks might make your head spin, which is why we broke it down for you, by variety:

Youkilis says you can safely eat tuna once or twice a week, as long as you’re not eating too many other big fish. So broaden your horizons with these six easy recipes.

Don’t eat just another tired tuna salad sandwich. This time, add a can of chickpeas for a savory upgrade—and some extra protein.

Simply mash the tuna and chickpeas, then add lemon juice, olive oil, salt, and pepper. And if you’ve got onions and red pepper? Great.

Chop them up and add them in, too. Serve your Tuna Salad 2.0 over leafy greens, or put it between whole-grain bread for a satisfying sandwich. (And if you’ve got to have the traditional kind? Go for it. But slash the fat by using Greek yogurt instead of mayo.)

Don’t just eat the tuna from the can, guys. Step it up by throwing it on top of an easy, nutrient-packed base made of fresh spinach, hard-boiled eggs, black olives, cherry tomatoes, ground pepper, and de-thawed frozen green beans.

Chopped tomatoes, chilies, and cilantro, along with a squeeze or two of lime juice and a drizzle of olive oil, can transform a can of tuna into a bold and spicy taco filling that has hardly any fat.

Just heat tuna, mix it with the other ingredients, and fold it into a hard shell or soft corn tortilla for a lean Mexican dish. (Get creative—you can even add beans, corn, or avocado to switch it up.)

What, you’ve never thought to throw some tuna into your stir-fry? Then now is the time.

Simply toss a can of chunky tuna into a wok or pan with some soy sauce, powdered ginger, sriracha sauce (if you like a little kick), frozen vegetables, and white pepper.

Sautee all ingredients together, then serve over arugula or brown rice.

Both easy and impressive describe this dish.

Next, drizzle tuna steaks with 2 Tbsp olive oil, and coat with the mixture.

Let stand for 10 minutes, then grill for four to six minutes on each side, depending upon how pink you prefer the center. Done and done. (You can also try our recipes for grilled tuna with butternut squash and grilled ginger tuna.)

Skip the beef burgers for once and try grilling up some tuna patties instead.

Fold in 1lb of finely diced fresh tuna and ½ cup panko breadcrumbs (they’ll hold everything together), then form into patties.

Grill for three minutes on each side for burgers that are brown on the outside and medium-rare in the middle.

TOP 3 SUPPLEMENTS FOR GUYS ON A BUDGET