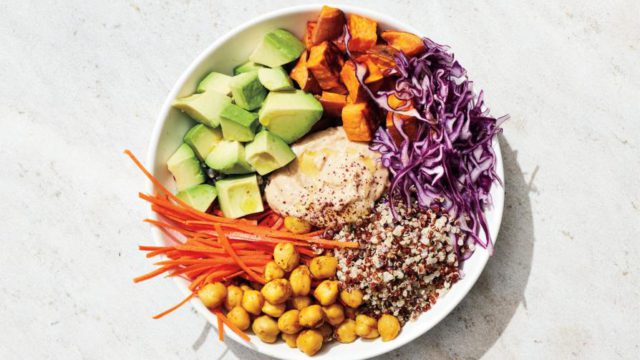 You know eating high-fiber fruits, vegetables, and grains is the secret to feeling fuller longer, as is fueling with protein. But how do they stack up against one another? You’d probably guess a slab of meat would keep you satiated for hours longer than a dish full of beans. But, you’d be wrong, according to a new study from the University of Copenhagen.

Legume-based meals (think: beans, peas, lentils), researchers say, are more satisfying and better at staving off hunger than a meat-based dish made of pork or veal. That’s not all. Plant-based foods are more sustainable than meat (they’re sourced more efficiently and better preserve the environment) and they’re also conducive to weight loss, the researchers found.

In the study, published in the journal Food & Nutrition, 43 young, healthy men ate three different meals consisting of the same amount of calories, but different sources and amounts of protein. They chowed on patties made of either beans and peas or veal and pork (a high-protein legume patty, low-protein legume patty, and high-protein meat patty). The men also self-reported changes in hunger before they ate and every half hour after for three hours.

The high-protein legume meal kept the men fuller longest; it delayed hunger and created a greater amount of fullness compared to the high-protein meat and low-protein legume patties. The men who ate the protein-rich vegetarian meal also ate 12 percent fewer calories in their next meal than if they’d had the meat-based patty.

Not convinced vegetarian-friendly fare will cater to your palate? The men in the study said the bean and pea patties were just as tasty as the veal and pork option. We’ve also got 11 muscle-building vegan recipes, 10 vegan recipes for weight loss, and 8 vegan options that will seriously keep you full. You’re guaranteed to find some filling-veggie options you love.

I HAVEN’T WORKED OUT IN MONTHS. CAN I DO MY OLD ROUTINES, OR WILL...