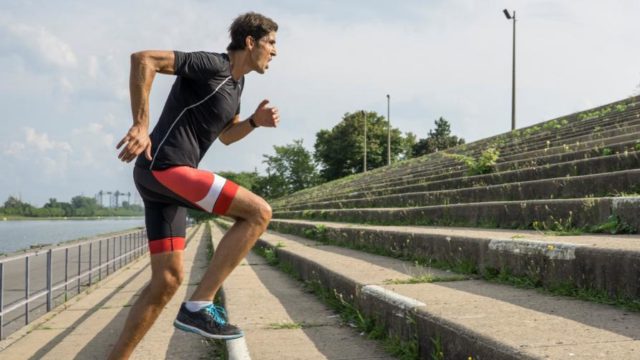 AT THIS POINT, you know working out is important. So does your neighbor, your gym buddy—hell, even your dog. Getting your blood pumping every once in a while keeps your heart healthy and wards off other chronic diseases like diabetes and cancer.

But even though the Centers for Disease Control recommends about 150 minutes of moderate exercise (or 75 minutes of intense exercise) per week, we all know that workout warrior who pushes himself way too far.

And while he may have a ripped six-pack, some new research suggests he might actually be doing damage to his health by working out so hard and so often.

Here’s why: Working out three times more than the recommended average (that’s seven and a half hours a week) may actually lead to a buildup of plaque in your arteries. That plaque buildup could then lead to heart problems over the long term, according to new researchfrom the University of Illinois at Chicago.

In the study, which was published in the journal Mayo Clinic Proceedings, researchers investigated the exercise habits of more than 3,000 black and white people over 25 who joined the Coronary Artery Risk Development in Young Adults survey in 1985, and then compared that exercise data to people’s CAC levels (a measure of artery calcification) over that time.

Researchers divided people into three groups: Those who exercised less than the 150 minutes per week, those who hit the guideline, and the over-achievers who cranked out out more than 450 minutes of exercise a week. Surprisingly, while people who exercised at the top levels were 27% more likely to have calcified arteries, the white men in that gym rat group showed an 86% increase in their risk of plaque buildup. “We expected to see that higher levels of physical activity over time would be associated with lower levels of CAC,” said study co-author Deepika Laddu, Ph.D., an assistant professor of physical therapy at the university.

That’s what we would have expected: After all, exercising is good, and more exercise is better, right? But this longitudinal study suggests that may not be the case.

“High levels of exercise over time may cause stress on the arteries leading to higher CAC,” said co-author Jamal Rana, a cardiologist at Kaiser Permanente in Oakland. There may be one silver lining, though: “This plaque buildup may well be of the more stable kind, and thus less likely to rupture and cause a heart attack.”

Regardless of the increased risk, the study authors do not recommend cutting back on your exercise amount if you’ve already exceeded the recommended guidelines. Remember: You don’t need to set the record in the 100-mile run to reap the health benefits of working out. Just be mindful of the risks of overtraining, and you’ll be on the right track.

The 10-round bodyweight strength and stability workout