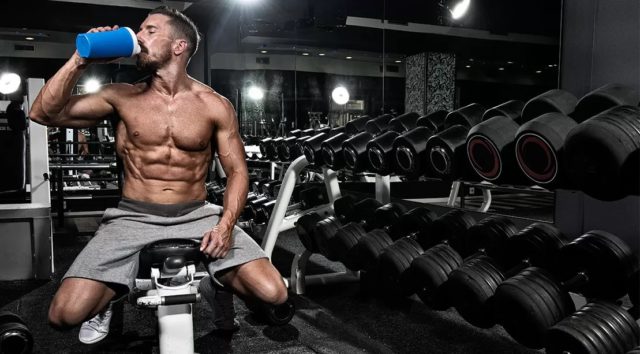 Many people consider whey to be the hands-down, gram-for-gram winner in the world of protein powders. Quick digestion, high branched-chain amino acid content, great effects on protein synthesis—it’s hard to debate the billing. But unlike boxing managers who duck some fighters for fear of an upset, we’re not afraid of a little competition. As such, we’re tossing all four of the top proteins into the ring for a no-holds-barred, fact-by-fact fight for the ages.

You, the huddled masses yearning to be ripped, crave an authoritative protein champ. Like fight fans, you probably have your loyalties. Some of the old troops who long for the days of Ali and Frazier might still be clinging to egg white protein for their fix. Others might be fond of the new-school science that favors casein, whose steady Oscar de la Hoya-like reliability has been enough to fortify their physiques. And then there are those of you who are starting to root for the underdog. Despite its less-than-impressive ring record, soy—like a surging contender—is a protein on the rise and has scored some impressive victories of late. But like the great Marciano, whey’s dominance in this division of sports nutrition has been unrivaled, until now.

This fight will be decided in 10 rounds, or categories, each with a separate but distinct focus that goes to the heart of protein effectiveness. Unlike boxing’s 10-point must system, however, we’re going for golf scoring—low score wins. The winner of each round is awarded one point, second place gets two, third gets three and, if you’re still following, fourth gets four. We’ll tally the points from each category, and the protein with the fewest points will be crowned the M&F Protein Powder Champion. If all the challengers are ready, it’s time to touch gloves and fight it out. You wanna ring the bell?
Round 1: Amino Acid Content

A complete protein is composed of 20 different amino acids, and some of those are more critical than others. At the top of that list are the branched-chain amino acids (BCAAs) that include leucine, isoleucine and valine, which are musts for protein synthesis, the process by which muscle fibers grow. Arginine is crucial for stimulating production of nitric oxide (NO), which has numerous vital properties for muscle growth, such as increasing blood flow to muscles to deliver more nutrients, anabolic hormones and oxygen for better recovery and greater muscle protein synthesis. Glutamine is also high on the list because, along with a multitude of other benefits, it keeps muscle protein synthesis high and muscle protein breakdown low. In a hard-fought opening round for amino acid content supremacy, check out the tally:

The true test of a protein is bioavailability—how much of its critical aminos actually make it to the muscles. To measure this, scientists use the protein digestibility corrected amino acid score (PDCAAS). It takes into consideration the amino acid content of the protein and its digestibility, which ensures the aminos get to muscles. Proteins that meet the amino acid and digestibility requirements for humans get a PDCAAS of 100%. All four proteins featured here meet the requirements for humans. In other words, they’re high-quality protein sources unlike, say, black beans, which get an 84%. Here’s how the battle of bioavailability shakes out:

For bodybuilders, the No. 1 reason to use protein powders is to boost muscle growth. But you may be surprised to find that some of the proteins have multiple health benefits. Time for the underdog to flash its health assets:

Research shows that the most critical times to take protein powders are immediately before and after workouts. The question many bodybuilders have is, which one at which time? Here’s how they compare as preworkout supplements:

It’s vital to get in protein immediately postworkout to stimulate protein synthesis at this critical time. Here’s how the challengers stack up as postworkout supplements:

Round 8: Muscle Building While You Sleep

You essentially undergo a 7-8-hour fast when you sleep. But taking the right protein powder before bed can make all the difference in muscle mass. Which one makes bedtime its business?

For some guys, benefits of certain protein powders are moot if they don’t taste good and go down easy. This round compares the availability of flavors of each protein as well as their ability to mix easily in water. In the taste round, whey begins to pull away:

Round 10: Price is Right

Last and certainly not least for most guys when it comes to protein selection is price. Everyone would like to fork out $50 to listen to Jim Lampley call the blow-by-blow action on HBO pay-per-view, but sometimes you have to settle for the basic cable clashes on ESPN’s Friday Night Fights. Budgets for protein powders are similar—of course you want the best, but ultimately it has to be affordable. Here’s how our contenders stack up on price:

The scorecards are in. For the particulars of the decision, let’s go back to our official ring announcer Michael Buffer: “Ladies and gentlemen—a round of applause for all four of these fantastic protein options. After 10 rounds of heated and informative scientific debate, we go to the scorecards. Meeting or exceeding the criteria for a quality protein in nearly every conceivable category and coming in with the lowest tally tonight is the newly crowned, undisputed protein champion of the world—whey protein!”

Thanks, Mike. Now here’s your peek at the scorecards. Remember, the low score wins.

Although whey protein was the solid winner in our bout, it doesn’t mean you should buy whey as your only protein. Each of the four proteins has specific benefits unique to it.

For those on a budget who can afford just one type of protein, your best bet is a whey protein powder. But if you can afford it, consider buying a jug of whey, a jug of soy and a jug of casein, and use about 10-15 grams of each whenever you take your protein. Or check out a protein that already provides a mix of these three. Either way allows you to take advantage of each protein’s high points.

As you can see, egg white—the defiant Evander Holyfield of protein that simply won’t go quietly into that good night—may have been at its best years ago but is still a beneficial protein. Most bodybuilders likely get enough egg white protein from breakfast, but if you don’t, consider also buying an egg white protein and adding it to your protein mix, or getting a mixed protein with egg white protein in it.

So in summary, don’t ignore soy, casein and egg white. Just make sure you have whey fighting for you every day in your physique pursuits.