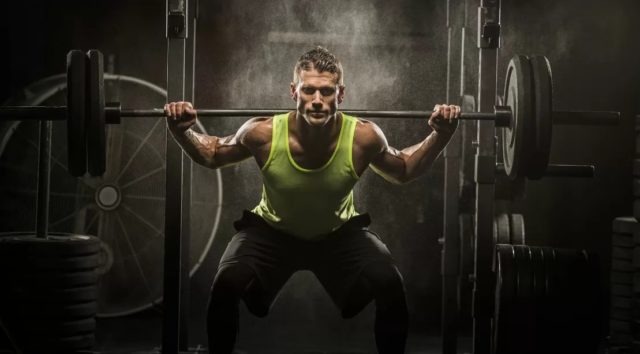 No one likes waiting around for a machine at the gym. Not only is it frustrating, but it also kills your momentum: It forces you to take long breaks, which kills your fat-loss effects, slows your cardio benefits, and cools down your body (which can cause injuries).

Rather than standing around for minutes just to do a certain exercise, use substitutes that target the same muscle groups, have similar intensity (if not more), and require minimal equipment. You’ll be able to get more work done at the gym, save time, keep your heart rate up, and get more results.

The bench press is the best chest exercise for strength. Unfortunately, during peak times, there’s usually a crowd around all the bench press machines.

Use alternating dumbbell bench presses. First, there’s usually a bench you can use. Second, by alternating between sides, you’ll increase the time under tension for a bigger pump and muscle-building stimulus on each pec. Third, because you’re targeting each arm separately, you’ll increase the strength on stabilizing muscles as well as correct any strength imbalances between sides.

There’s nothing like crushing a heavy barbell squat in the power rack for building massive legs, total-body muscle, and melting fat. But if there’s a group of people waiting for the power rack, it’s extremely difficult to do squats with a barbell: You’ll have to either clean the weight up to your shoulders or do a Steinborn squat.

Do barbell squats with a Bulgarian split squat. Just like with a back squat, for example, the Bulgarian split squat blasts your quads, glutes, and hamstrings. Better still, it requires no fancy equipment except dumbbells and a bench. Also, because it trains one leg at a time, it’ll improve your balance and core stability while ironing out any asymmetries.

Because many guys (and gals) still don’t squat, there’s often a line for the legs press machine.

Rather than waiting for the legs press, grab a heavy dumbbell and use the goblet squat to blast your quads. It takes your body through a full range-of-motion while strengthening your core and building great movement patterns.

Cable rows are a phenomenal exercise to target your traps and all the chronically weak muscles in your mid-back and rotator cuff.

Do suspended inverted row on a TRX or Smith machine. It targets the same muscle groups and, because it’s a bodyweight exercise, it takes a lot of stress off your joints and muscles. To make the exercise harder, elevate your feet on a small box, step, or bench.

Stability balls make every core exercise harder because it forces your core to work much harder. But why does it always seem like the gym has only three exercise balls and they’re always being used?

Instead of doing situps or planks on a stability ball, do a TRX body saw. It targets the same muscles while giving you far more muscle-building stimulus.

The pullup is the best exercise for wide lats, strong and healthy shoulders, and massive grip strength. Of course, it often seems like there’s only one pullup station While you might assume you would substitute a pullup with a lat pulldown, I recommend a different approach.

Try doing a heavy dumbbell farmer’s carry instead. One, you’ll build your grip strength, which is something you really can’t simulate on a lat pulldown. Two, you’ll isometrically strengthen your shoulders and rotator cuff—especially if you’re using a heavy weight.

Dips are a great bodyweight exercise to build a barrel chest: They hammer your pecs, shoulders, and triceps, and are a safe, functional movement.

If there’s a line for the dip machine, switch to close-grip pushups to target the same muscles (as well as your core). As an added benefit, you can externally load pushups far easier than dips—to make it harder, all you have to do is elevate your feet on a box or put a weight plate or vest on your back.

A medicine ball helps you train explosive movements without, you know, hurting anyone. You can easily slam it on the ground, throw it on a sturdy wall, and have it bounce back, or propel it as far as you can for distance. Without a med ball, however, it’ll be dangerous to slam anything on the ground or on a wall.

Instead, train your explosiveness with a tried-and-true power exercise: the kettlebell swing. While it’s the not the same thing as throwing a med ball, you’d be surprised as to how much the swing carries over to other movements. It improves total-body coordination and activation, trains triple extension at your knees, ankles, and hips, and fires your glutes. For those skilled with kettlebells, do an alternating one-arm swing to crank up the intensity and complexity of the exercise.

I love the abs wheel—it blasts your core and helps you build your eight-pack. I’d be stunned, however, if you can find a commercial gym with more than three.

Take advantage of an incredible core exercise: the Turkish get-up. Not only does it strengthen your core, but it also builds total-body stability as you move through space with an external weight.

Equipment like stationary bikes, ellipticals, and treadmills are the most popular machines in any gym—thus, during peak hours, don’t be surprised if you have to wait to use them.

If you don’t feel like standing around and getting cold, do a light circuit instead. Set up an area to do goblet squats, pushups, dumbbell rows, and jump squats, and see how many rounds you can do in a certain amount of time. Or, if you feel that will interfere with your strength training, use a jump rope for 10 minutes.

Finally, feel free to go outside and do the same cardio: ride your bike in the park, jog through the city, and go swimming.