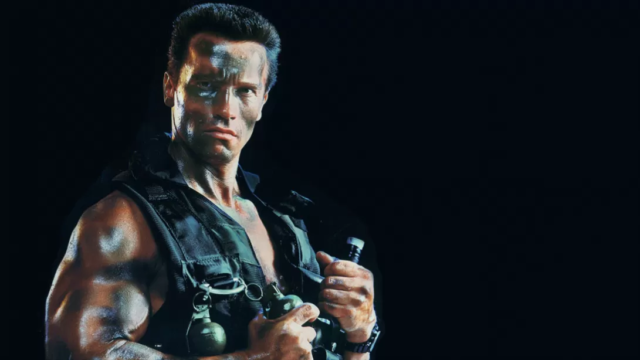 Listing everything seven-time Mr. Olympia and action film legend Arnold Schwarzenegger taught us about exercise could fill an encyclopedia. Actually, it did! Back in the late 1990s Schwarzenegger penned The New Encyclopedia of Modern Bodybuilding, an 800-page tome packed with advice, tips, and techniques for both newbie and veteran plate pushers.

And after revisiting his filmography every Saturday night for the past few months, we realized two things: 1) we’re incredibly lonely people, and 2) films like Commando, The Expendables 2, and even Jingle All the Way contain more than explosions, fight scenes, and one-liners. If you look hard enough at any movie in the Schwarzenegger catalog you’ll find Easter eggs that link to health and fitness. Here are a handful of the ones we discovered.

LESSON #1: DON’T COMPARE YOURSELF TO OTHERS.

Don’t overlook progress you’ve made simply because you’re not as shredded as Rambo or as huge as Mr. O. If your genetics provided you with a body that looks more Vincent Benedict (Danny DeVito) than Julius Benedict (Schwarzenegger), focus on the things you can change instead of the things you can’t.

We’re not counting on you having seen The Last Stand, but in the film small town sheriff Ray Owens (Schwarzenegger) has to rely on a motley crew of boners to help him ward off gun-toting drug lords from Mexico. Eventually, one of those boners named Lewis Dinkum (Johnny Knoxville) earns Owens’ trust and gets the go-ahead to mow down bad guys using heavy artillery. (It truly is a heartwarming tale.)

In the gym, the right (unarmed) lifting partner can push you to work harder and serve as a motivating force. The key is finding the right training partner. According to a study from Kansas State University, the optimal workout buddy is at a slightly more advanced fitness level but isn’t overly vocal with his or her encouragement.

We can suggest you warm-up for five, 10, or 15 minutes, but you’re the only one who knows what your body truly needs to feel primed for a training session. That might include some time on a treadmill, a handful of dynamic stretches, or some disturbing Mr. Miyagi-style hand rubbing. Whatever works.

Although the effect warming up has on performance is a topic that’s debated often, a 2006 review of studies about whether warming up reduced injury risk ruled that it appeared that a warm-up did reduce the risk of injury. However, the review also stated that no definitive statement could be made without further testing.

When The Running Man game show host Damon Killian (Richard Dawson) offers Ben Richards (Schwarzenegger) a fulltime gig hunting and slaughtering convicts on live TV, Richards respectfully turns him down and then slyly reminds Killian (and the viewers) that portion control is essential to a healthy diet.

Trouble is, managing portions can be tricky. Using crushed cereal flakes, researchers at Penn State University found that people that ate smaller portions of the flakes also consumed more by weight and calories. What does this mean for you? If you’re serious about losing weight, adding muscle, or otherwise avoiding a “dickie do”, you’ll need to figure out your macros to achieve your goals.

Thankfully, we already did the heavy lifting for you. Check out this formula, and then forgive us for using that awful pun in the previous sentence.

LESSON #5: ATTENTION TO DETAIL IS CRITICAL.

Imagine what would happen to covert agent Harry Tasker’s (Schwarzenegger) family if the nefarious evildoers he was tracking received a tip that Tasker was a family man with a (hot) wife and (bitchy) kid waiting at home. Keen attention to detail was how Tasker kept this info under wraps, and it’s how you can remain injury-free and avoid plateaus. Some key elements to focus on while you train: squeezing a muscle at its peak contraction and controlling both the eccentric and concentric portions of a movement.

A recent study published in American Journal of Infection Control found that high-fives and fist bumps spread less germs than handshakes. However, since the custom is here to stay you might as well impress people with your shake as you rub bacteria on their paws. To do that, make time to train forearms. Strong forearms can translate to performing more pull-ups and moving more weight when you row or deadlift.

Looking to boost your forearm and grip strength? Go here.

Listening to music while you train can drown out noise from grunters and blockheads that slam dumbbells together. Turns out, your tunes can also enhance a training session. According to the School of Sport and Education in London, the ideal workout song falls between 125 and 140 beats per minute. Two jams that hit the mark: “Beat It” by Michael Jackson, and “Gangam Style” by Psy.

LESSON #8: UNILATERAL TRAINING HAS ITS BENEFITS.

Yes, training unilaterally keeps you in the gym for longer periods of time. But single-limb exercises can also recruit more muscle fibers and allow you to detect weakness.

As Col. John Matrix (Schwarzenegger) politely reminded his nemesis Bennett (Vernon Wells), letting out some steam is crucial to overall well-being. Managing stress can help keep cortisol — aka “the stress hormone” — levels from spiking. Chronically high levels of cortisol have been linked to a decrease in muscle tissue, higher blood pressure, and weight gain. In other words, instead of stressing out.

People watching at the gym can do more than tip you off as to which sweat monster left the kiddie-pool-sized puddle on the bench before your set; it can help you elevate your game. From spotting good (or awful) form to seeing a new spin on an old exercise, scoping out what other lifters are up to can provide priceless info, motivation, or inspiration.

Stuffing your face with high-calorie deliciousness every so often can boost metabolism and provide a mental reprieve from the demands of eating clean fulltime.

Turbo Man doesn’t have the most original slogan, but turning on the afterburners and going heavy at the gym can reap rewards. That being said, going heavy on every exercise of every workout may not be the best route to continuous gains. A better option is to vary your training to include periods of high reps and moderate weight, as well as low reps and heavy weight. Doing so, as well as changing exercises and methods of resistance on a consistent basis, can ensure that you’re training your muscles from all angles.

Can sugar affect your memory?