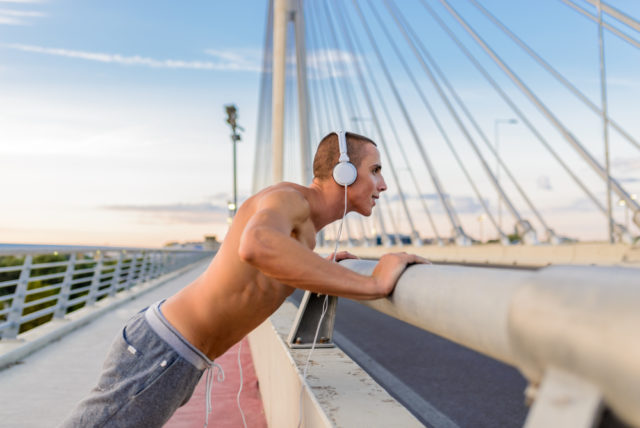 Winter’s not so bad. Sure, your motivation to build a great body will always be stronger in the spring and summer when your physique is more frequently on display, but the cold-weather months certainly have their place during a training year. And we’re sure you held your own this past season—you did your bulking cycle and focused on strength to add mass, and you even got to indulge in some holiday treats, since nobody except your significant other was going to see your abs anyway.

But we’ll bet you also picked up some bad habits and, perhaps, accrued a few injuries along the way. And by now, you’re probably looking a little soft, feeling a bit sore, and moving a touch stiffly with summer—the few months of the year when you most want to look and feel your best—just around the corner. It’s time to blow the dust off and reclaim a body that once looked as good as it performed. All you need to do is follow our guide to “spring-clean” your training and diet, and we’ll help you undo some, if not all, of the self-inflicted damage from last winter.

You know the foods you’re supposed to eat, but that doesn’t mean you always possess the resolve to eat the good stuff and avoid the junk. So when transitioning out of a winter bulk-up into a spring cutting phase, focus on adding better habits rather than trying to remove all of the bad ones right away, says Robert Yang, C.N., a nutrition coach in San Diego who works with pro athletes and physique competitors.

“Have 30 to 50 grams of protein and at least a tablespoon of fat in the morning,” says Yang. This will help with appetite control and cravings later in the day. Fibrous foods are also good breakfast options, as they’ll help control blood sugar, allowing for steady energy. “Eggs, avocado, and oatmeal is a good breakfast. So is chicken breast, eggs, and veggies. Drinking two cups of water first thing will help prevent dehydration and that will help with energy throughout the day,” he adds.

Looking in the mirror at the bloat you’ve packed on over the winter can frighten guys into taking on too aggressive a diet too soon, but Yang says that “there are many things guys can do to initiate fat loss. Protein requires the most energy to digest of any nutrient, so aside from the muscle-building aspect, it has a strong fat-burning effect. Eating more cruciferous vegetables—broccoli, cauliflower— will also increase thermogenesis and decrease water retention. Then you can use things like fat burners to get down to single-digit body fat later on. If you use them too early, there’s no place else to go.”

The way you breathe may offer the simplest and easiest route to a physique that’s more aesthetic, stronger, and less prone to injury, and yet you’ve probably never given it a moment’s thought.

First of all, if your chest and shoulders rise when you take air in, you’re doing it wrong. An optimal breath comes from your belly— your abdomen should expand 360 degrees on the inhale, and it should withdraw on the exhale. “You’ve been conditioned to think that when you take a deep breath your shoulders go up, and that you should brace your abs all the time,” says Belisa Vranich, Psy.D., founder of The Breathing. and a breathing consultant to athletes, celebrities, and military personnel. “But that doesn’t allow you to develop flexibility in your core.” After years of breathing incorrectly, your abdomen might not expand much when you try to breathe from your belly, which Vranich likens to using a shortened range of motion on lifts in the gym. On the exhale, pull your stomach in toward your spine. Over time, Vranich says you’ll be able to take bigger belly breaths.

Dedicate 15 minutes on your days off from the gym to practicing what Vranich calls a “bellows breath.” “It’s the same breathing you see Rickson Gracie do in [the documentary] Choke,” she says. From a seated position, breathe in as slowly and deeply as possible through your belly. When you can’t take in any more air, exhale, sucking your waist in. Breathing like this enhances recovery by hyper-oxygenating your blood and lowering cortisol.

During training, there’s another breathing tip you can use to enhance strength and prevent injury. You may be familiar with the Valsalva maneuver, in which you take a deep breath and raise your tongue to the roof of your mouth to prevent air from escaping. The technique creates intra-abdominal pressure, which stabilizes your spine under heavy loads. But Vranich says most people do it incorrectly by not contracting muscles that make up the pelvic floor.

Doing so is as simple as squeezing those muscles that cut off your urine stream (the same ones women activate when doing Kegel exercises). Before attempting any heavy lift, take a deep belly breath and contract your pelvic floor—then brace your core as if you’re about to get socked in the gut. “You’ll feel the tension rise up into your face and ears,” says Vranich. This is a good thing, as it means you’ve stabilized your core optimally. Perform your rep, let the breath out at the top, and repeat.

“If you don’t use the pelvic floor when you do a Valsalva, you miss the point,” says Vranich. “That’s how weightlifters get hernias. Lower-back pain is related to the pelvic floor, and you can keep going to the chiropractor, but until you learn to use your pelvic floor it won’t help.”

Winter mass cycles typically focus on the classic compound barbell lifts—squats, bench presses, deadlifts, cleans, and their many variations. These exercises recruit a maximum amount of muscle, but because they allow you to load a lot of weight, they’re also very stressful to the joints and connective tissues.

As lifters get older or become more advanced in their strength, they tend to shy away from heavy-duty barbell lifts to avoid injury. Even if you’re still in your prime years, it’s wise to prevent injuries before they take root by cycling off the big lifts and employing more joint-friendly exercises that stress the muscles more than the tendons. Inject some of the lifts from the following slides into your routine to recruit the muscles in new, challenging ways, safely.

Perform a dumbbell bench press but rotate your palms as you’re lifting so that they face behind you in the top position. The twisting action better activates the pectoral muscles and lets you make the most of lighter weights.

Bend your hips back about 20 degrees as you perform a dumbbell lateral raise. This modification puts the stress of the weight more on your delts than on your shoulder joints.

Perform a dumbbell bench press but push the sides of the dumbbells together above your chest the entire time. (This is easiest to do with hexagonal dumbbells, which have sides that fit together.) Continually pressing the dumbbells inward keeps tension on your pecs and makes light weights feel heavy.

Load a barbell into a landmine unit or wedge it into a corner. Grip the opposite end at the very end of the sleeve in your right hand and stagger your stance so your right leg is trailing. Beginning with the end of the bar about a fist’s space away from your shoulder, press the bar overhead. Pressing at a near-45-degree angle disperses the load across your shoulder joints and makes for a hybrid overhead and incline press movement.

The landmine makes it easier to get the weight into position compared with heaving dumbbells up to your chest. Set up the bar as described below and lie down on the floor facing away from it. The bar should rest behind your head and off to one side. Reach for it with both hands and lift it into position so that one hand locks it out overhead. Lower the bar with one arm until your triceps touch the floor, pause, and then press it straight up. (Exercise not pictured.)

Hold dumbbells with palms facing each other and press overhead. “These are a great replacement for barbell overhead presses if you suffer from shoulder impingement or pain in the joint capsule,” says Lee Boyce, a strength coach in Toronto. “This hand and elbow position will push the head of the upper arm bone back and out of impingement territory.”

Most people have tight hips and are already predisposed to lower-back pain. For that reason, conventional deadlifts are often a bad choice. “It’s easier to get into the right pulling form when you have a wider stance and lower seat position,” explains Boyce. “Having the hands inside the feet allows you to bow the knees out and raise the rib cage, which is all less dependent on your having mobile hips and flexible hamstrings [since many don’t].”

Stand with feet just outside shoulder width and toes turned out 45 degrees. Bend your hips back to grasp the bar at arm’s length with an overhand or mixed grip at shoulder width. Push your knees out and drive through your heels to extend your hips to lockout, lifting the bar until it’s in front of your thighs.

The pullover works the lats without stressing the elbows, which often get irritated after years of chinups. You’ll also work the serratus muscle. Lie back on a bench while holding a dumbbell over your chest by one of its ends with both palms. Allow your head to hang slightly off the bench. Brace your abs and keep your ribs pulled down as you lower your arms behind your head until you feel a stretch in your lats. Pull the weight back up.

Supporting the chest takes pressure off the lower back and isolates the upper back. Set a bench to a 45-degree incline and lie with your chest against it and a dumbbell in each hand. Retract your shoulder blades and row the weights to your hips.

The hip thrust targets the glutes more directly than any other exercise and strengthens them without risk of lower-back strain. Sit on the floor and roll a loaded barbell into your lap. (You may need to wrap it in a towel or use a bar pad for comfort.) Lie back against a bench, bend your knees, and plant your feet on the floor. Brace your abs and drive through your heels so you raise your hips off the floor to full extension.

“Forward lunges and aggressive deceleration [from running] can damage your knees,” says Boyce, leading to chronic conditions such as tendinitis. “Reverse lunges make the posterior muscles fire. It’s also a better choice to more evenly distribute loads between both legs. You won’t have to deal with forward momentum pushing the knee over the toe, either.” Hold a dumbbell in each hand and step backward, lowering yourself until your rear knee nearly touches the floor. Your front shin should remain completely vertical throughout.

3 EXERCISES TO INCREASE YOUR DEADLIFT MAX