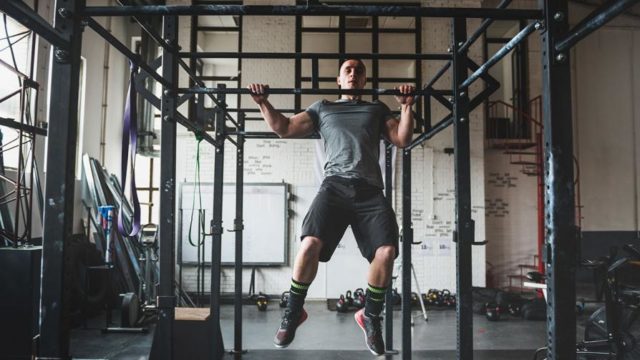 AS MUCH AS you tell people that you go to the gym to stay young, feel great, and keep your blood pressure in check, you’re not kidding anybody-you want to get laid as much as is humanly possible, and you’ve noticed that guys who sport bodies carved out of granite do pretty well for themselves in that department. We’ve noticed, too. That’s why we put together a master plan for pumping up all the trophy muscles you love to show off­ and the ladies love to look at. Use the following as a guide to bigger arms, a buff­er chest, chiseled abs, toned hips, and broader shoulders. Fortunately, taking our workout advice will also improve your health along the way, but it’s your sex life that will be in the best shape ever.

Master the chinup: It’s the best arm-building exercise there is, bar none. What’s that about curls? Curl exercises have their place, but chinups allow you to lift more weight (think about it: a 40-pound dumbbell vs. your whole body)—and lifting more is the greatest contributor to muscle gains. To build bigger biceps, perform some variation of the chinup at least once per week. We like this one: Drape a towel over the bar and grab an end in each hand. Hang so that your palms face each other. Now pull yourself up as normal. The towel makes for a greater challenge to your gripping muscles, which will spur growth in your forearms as well as your biceps.

Tuck your elbows: When you bench press, take a narrow grip (so that your hands are about shoulder-width apart) and pull your elbows in close to your sides—as opposed to letting them point straight out away from your body. Keeping this tighter position will allow your triceps to take on more of the load, and that emphasis will make them grow. You’ll also be in a biomechanically stronger position, which means you can lift more weight.

Keep constant tension: Everyone does lying triceps extensions to isolate the tris, but almost no one gets the full benefit from the exercise. Start with the bar directly over your forehead when your arms are extended, rather than directly over your chest as most lifters do. Maintain the position as you lower the bar behind your head for your reps. Keep your arms at this angle to your body to force your triceps to fully engage throughout the exercise; the other version allows the bones of your arms to bear the weight in the up position (denying your muscles their rightful load).

Be eccentric: Most chest exercises emphasize only the concentric contraction of your pecs (when the muscles shorten, as in pushing up in a bench press). But you can achieve greater growth by focusing on the eccentric contraction (the point of a rep in which your muscles lengthen) combined with a powerful concentric action immediately afterward. Use the power pushup. Set up two aerobic steps and rest one hand on each. Get into pushup position. Quickly move your hands inside the steps before your body touches down and then immediately explode back upward, placing your hands on the steps again. That’s one rep. Do five sets of three to eight reps, resting up to three minutes between sets. This much-intensified variation of the old-school clapping pushup works every muscle fiber in the chest, making it a foolproof strategy for growth.

Straighten your posture: If you’ve been doing bench presses, flyes, and pushups, congratulations! Chances are, you probably have a pretty good chest already. The problem is, it may not be getting you the credit you deserve because of your rounded shoulder posture. A weak upper back allows the shoulders to droop forward, giving even large pectorals a sunken appearance. The solution: Strengthen the upper back and make more room for the chest to show. Try the face pull. Set up as you would to do a seated row, but attach a rope handle to the cable. Keeping your torso straight, pull the handle to your face, stopping just before your chin, so that your upper arms are parallel to the floor and your shoulder blades are squeezed together. That’s one rep. Do four sets of eight to 10 reps, resting 60 seconds between sets.

Plug in your chest flye: It’s easy to learn good form on the chest flye exercise—just think of giving someone a bear hug. Well, we’ve got another mnemonic device that will help you remember how to do the flye more efficiently. Think of plugging two extension cords together. It’s the same basic movement as a regular flye, but your palms are turned away from you, rather than facing each other, which activates more pectoral musculature.

Go heavy and go over: Two of the best ways to build your abs are hopefully already second nature to you. Lifting heavy weights on any exercise forces your core to contract hard to keep your spine safe—so you’re getting an automatic ab workout every time you go after a big lift. Also, core activation is even greater in any exercise that’s done overhead, so shoulder presses (especially done standing) are an ab workout in and of themselves. Want to fire up the abs even more? Actively squeeze them throughout your sets. Picture yourself wringing all the fat out of your abdomen with every squeeze—the end result will be the same.

Burn calories: More than any other strategy, this is the one that is most responsible for revealing the tight abdominal wall beneath your layer of chub. To burn the most calories, you must work the greatest possible number of muscles. For a multiplied calorie-burning effect, try combining various exercises, such as lunges with an overhead press, or Romanian deadlifts with a bentover row.

Work your abs in reverse: You already know how to crunch, but reverse that motion by bringing your torso away from your body and you’ll open up an entirely new avenue for growth. Try the reverse woodchop. Grab a medicine ball and stand with your feet at shoulder width, staggered heel to toe. Reach down with the ball to the front of your back knee (as if you’d just finished chopping into a log), and then quickly extend up and back to the opposite side, as if you were throwing the ball over your shoulder. Perform three sets of eight reps on both sides, resting 90 seconds between sets.

Go sumo | Picture a sumo wrestler about to start a match (minus the silk diaper). Now try deadlifting in that position—your legs wider than shoulder-width apart and feet turned outward 45 degrees. Pull the weight as normal, but lean back a touch in the top position, trying to push your hips as far forward as possible. The sumo stance puts you in a position to lift substantially heavier weight, and it optimizes the activation of your glutes. Do five sets of five reps, resting two to three minutes between sets.

Build your hams | Get this: If you increase the size of your hamstrings, you’ll create better separation between them and the lower portion of your butt (and the ladies really like that). To do it, use an exercise that works both the glutes and the hamstrings maximally, such as the Swiss-ball leg curl. Lie on your back and rest your heels on a Swiss ball. Drive your heels into the ball so that you “bridge” up off the floor and your body forms a roughly 45-degree angle to the floor. Keeping your hips elevated in this position, bend at the knees, rolling the ball toward you. Reverse the motion until your knees are straight again. That’s one rep. Perform three sets of eight reps, resting 90 seconds between sets.

Run uphill | One of the glutes’ main functions is to power you forward when you stride, so there’s no more natural way to train them than to run. Find a fairly steep hill you can run up, and stand at the point where the top is about 100 yards away. Sprint to the top and then walk slowly back to where you started. That’s one rep. Do three to eight reps.

Bring up the rear: The missing piece in most guys’ shoulder development is the rear delt, which is almost always underdeveloped relative to the front and side portions of the muscle. To bring it into balance, cut back on the amount of pressing exercises you do, and try this drop set of the reverse cable fly. Attach a rope handle to the cable and grab it with one hand. Bend at the hips until your torso is almost parallel to the floor and raise your arm out to the side until it’s level with the floor. That’s one rep. Perform 15 reps on both sides, and then rest 30 seconds. Perform another 10 reps, and rest 60 seconds. Finally, complete five more reps. While it’s a lot of work for a small muscle group, it should be just enough to shock the long-neglected rear delts into growing.

Work the whole muscle: The lateral raise doesn’t get difficult until your arms are nearly straight, leaving a lot of space in the range of motion in which there is little tension on the deltoids. But you can counteract that with lateral raises on an incline bench. Grab a dumbbell, set the incline to 45 degrees, and rest one side of your body against it. Perform a lateral raise as normal, stopping when your arm is slightly above parallel to the floor. You’ll feel the tension on your deltoids the entire time, not just in the last few inches.

Train one at a time: The shoulders like heavy weights. The trouble is, to train heavy, you need a barbell, but then you risk the stronger side taking over for the weaker one and shortchanging it on muscle gains. Instead, use one dumbbell for your shoulder presses and hold on to something for support with your free hand. This takes the balancing act out of dumbbell work, allowing you to focus only on lifting heavy with one arm—maximizing the work of that shoulder.