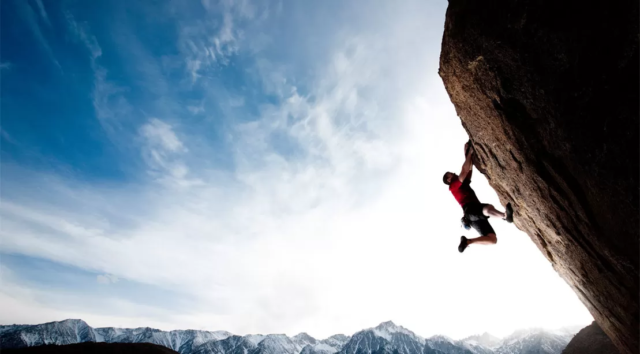 After your 500th consecutive workout in the weight room, the fluorescent light in the gym starts to feel as drab and stuffy as a fluorescently lit cubicle, and the old routines of arm day, leg day, and ab day just aren’t cutting it.

With warm weather approaching, now is the time to ditch the racks and benches and venture outdoors into the sunshine. Your bleary eyes will find life is better with the wind in your hair, the sun on your back, and the world zipping past.

We’ve ranked the top outdoor sports—mountain biking, trail running, obstacle-course racing, road cycling, and rock climbing—based on exercise efficacy, calories burned, cost of gear, availability, and risk factor to see which one offers the most burn for your buck. The outdoors awaits. Now go become one with nature.
1. Rock Climbing

The whole world melts away when you’re high up on a rock face with nothing between you and the deck but 10mm of rope and your grip on the rock. And that’s what’s beautiful about rock climbing: There are no full-length mirrors and no babes to impress, it’s just you, your partner, the route, and in many cases, killer views.

“I love the individual challenge,” says Kris Peters, who has made a name for himself training world-renowned rock climbers like Daniel Woods and Emily Harrington. “It’s you against the rock up there, and it’s an incredibly self-satisfying feeling when you complete something you’ve worked so hard for.” To get started, find a guide and take a class or two that’ll get you up on real rock on Day 1 and give you a feel for the sport. If it suits you, get more practice at a climbing gym and, in the process, look for a more experienced partner who’ll show you the ropes—literally.

“Climbing is a very upper-body- dominant sport,” says Peters, whose Black Mountain Training specializes in climbing- and mountaineering-specific strength. “The three biggest muscle groups that are going to get worked are biceps, lats, and forearms.”

Climb enough, and your upper body will be rock-hard. The mental focus it requires also makes it a form of meditation to some. You clear your head and work the route, and when it’s done, you’ve accomplished something incredible.

“On outdoor rock, you’re always going to need a climbing partner and a ton of wicked expensive gear,” Peters says. Plus, access to outdoor rock is quite limited. “That’s why a lot of people go to the gym—all you need is your harness and your shoes since most gyms already have everything else you need.” Also, lots of climbers have skinny legs for a reason. And then there’s the considerable fear factor of dangling from a rope high off the ground. Try to remember that climbing is a technical sport—dependent on strong ropes that are anchored to a system that will support your fall—and not a risky one, as long as you follow safety protocols.

GET DOWN AND DIRTY

Imagine running a brutal cross-country race over rugged terrain—except with a 50-pound sandbag over your shoulders as you haul ass up a mountain. Then you’re back to running, only now your legs feel heavy and your muscles are tweaking. Next you leap into freezing-cold water that makes your legs full-on cramp. Now you’ve got to scale a wall, but your calves aren’t firing; they’ve shut down. That’s obstacle-course racing (OCR). “It’s in those moments that you’ve got to dig deep and find strength within yourself,” says David Magida, one of the sport’s first pro athletes and the co-author of The Essentials of Obstacle Race Training. Yes, what once looked like a mud-splattered fad of people taking the scenic route to a drinking party is now a real, grueling sport and a growing one at that. “That’s what makes the sport so beautiful—you find out a lot about yourself over the course of a race.”

Because of the event-based nature of OCR, it’s more a way of testing fitness than of building it. “It’s all about being challenged by a race that tries to break you down from every facet of fitness imaginable— strength, power, endurance, speed, agility, mobility, and, just as critical, recovery,” Magida says. “It tests you, it pokes holes in your fitness and challenges you to correct them so you can be better the next time you line up.”

The “R” in OCR stands for “race,” so straight-up speed is important, but all those strength obstacles— heavy carries, wall climbs, monkey bars, and the like—tend to level the playing field for guys who do a lot of strength work. And the races are fun! “I think we were designed to run, to jump, to climb, to move, to get dirty,” Magida says. “It makes you feel like a kid again, but it also kind of makes you feel like a man at the same time.”

An OCR is more than just a test of strength, endurance, and speed; it’s a test of toughness. Crawling through mud beneath barbed wire, hefting yourself over high wooden walls, running through charged electrical wires, jumping into grimy water—you’re bound to get bruised and battered. “By the time you cross the finish line, you’re sore for days,” Magida says. While the equipment may be minimal, race entry fees often start near the triple digits.

What better way to explore the 2.68 million miles of paved roads in America than on a bike? The perception of elitism in roadie culture is disappearing. “Nowadays, you finish the ride, you high-five your buddies, you grab a beer, and you’re stoked— that’s the new norm,” says retired pro cyclist Ted King.

Leg development is a given, but King makes the case that “if you’re really pumping your bike in a sprint, there’s plenty of upper body to be done.” Sprints, however, last only a matter of seconds.

For one, you can cover a lot more ground on a road bike. Also, according to King: “You can do a ton of work in a one-hour ride—you can sprint or do endurance—and that’s going to be much more efficient than a one-hour run” that would leave your body wasted for days.

For one, traffic is dangerous. Then “you have to get over the fact that you’ve got to wear spandex and shave your legs,” King says. Also, cycling gear isn’t cheap. Plan to spend at least $1,000 on a solid entry-level steed.

When pounding pavement starts to grind on your nerves and joints, it’s time to lose yourself on the local trails. Exploring wilderness on your own two feet is “very raw and very natural, and that’s what inspires me,” says pro trail runner Max King. Plus, it’s more of a full-body workout than the treadmill could ever hope to be. “Outside, you’ve got undulating trails, you’ve got hills, you’ve got uneven terrain and uneven footing,” King says, “so trail running works those stabilizing muscles in a way that the very repetitive motion of running on a road or treadmill doesn’t. It takes that basic runner and fills him out into a more complete athlete.”

As with any kind of running, trail running is primarily going to work your lower body (quads, glutes, hamstrings, and calves). But irregular terrain riddled with roots, rocks, and other obstacles—and softer surfaces require you to use more stabilizer muscles and connective tissue and engage your core muscles.

Dirt running is dirt cheap, since the only gear you need is a pair of trail shoes ($100 to $150). Plus, softer surfaces and uneven terrain mean fewer of the overuse injuries that typically plague runners (hello, runner’s knee!), though there are environmental factors—more exposure, falling hazards, animal encounters— that, depending on your outlook, can be seen as very good. And you burn up to 10% more calories than on concrete.

Finding a trail isn’t as easy as stepping out your front door. They’re almost everywhere, from rugged mountain ranges to local city parks, but seeking them out takes time and effort. Also, King points out, “it’s still just running.” There’s enough lower-body work to beef up your legs, but you’re still not hitting your upper body much. King supplements trail runs with core work, upper-body weight training, and rock climbing. And if you really don’t like running, you probably won’t like it anymore in the boonies.

For a lot of guys, mountain biking conjures images of adrenaline junkies in full-face helmets rocketing down white-knuckled descents and hucking themselves off cliffs à la Red Bull Rampage. “It’s not necessarily gnarly,” says Rebecca Rusch, a seven-time world champion endurance mountain biker. “It’s like skiing, where you can choose a green, blue, or black trail depending on your skill level.” For her, mountain biking is all about leaving the road behind and exploring. “It’s easy to say, ‘I want to see what’s over that hill’ or ‘I’ve never been in that valley over there, so I think I’ll check it out.’ I really like the distance you can cover on a bike; you see so much more.”

Besides the downhill bits, mountain biking, done right, is low-impact. If there’s an obstruction like a large rock, you can get off your bike, walk around it, and keep going. It’s also mentally engaging “because you’re constantly looking ahead,” Rusch says, “and making choices about picking a line, standing or sitting, and shifting gears.”

Your ass will probably hurt from rattling over roots and rocks, so stand up in the pedals when riding through obstacles to spare yourself some of the beating.

9 habits that make you look older than you are