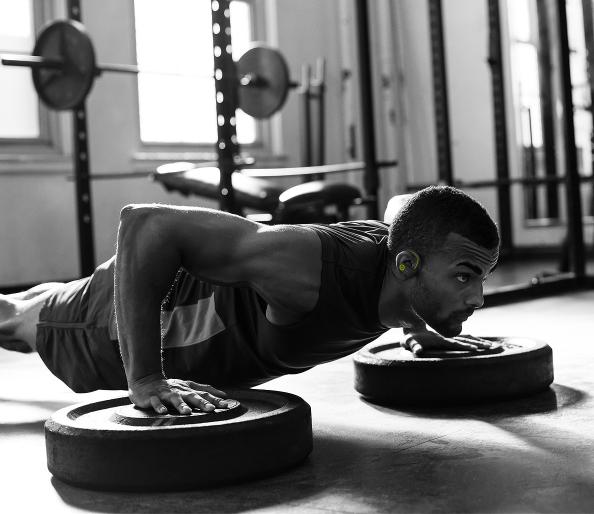 So you’ve gotten yourself a new gym membership. Your bought yourself a shiny new pair of kickass cross-trainers. You even dropped a dime on a flashy pair of powerlifting shoes—y’know, for when you really start hammering the heavy weight.

Now you’ve just gotta tackle the hardest part: Dragging your ass to the gym.
And trust us, getting to the gym can often feel like the hardest part of any fitness routine, especially when the weather is lousy. (January 1 is a great date to start a lot of things, but taking up marathon training in snow drifts isn’t necessarily ideal.)

So we called up a pro who really knows how to keep guys sharp in the weight room: Nick Winkelman, the director of training systems and education for EXOS (formerly Athlete’s Performance), where he’s worked since 2001 to train top NFL prospects. Winkelman spoke to Men’s Fitness about how these guys get ready for the league—and five tips to motivate yourself for your own workouts.

You’d think that every NFL prospect is intrinsically (or internally) motivated. But that’s just not the case. The guys at EXOS are talented, but even the best of the best need to be pushed every now and then. Even though prospects know that they’re supposed to take a plunge in a cold tub and grab a post-workout shake after sessions, some are reluctant.

“Every single year, we struggle with certain guys who don’t want to get in the pool,” says Winkelman. What makes the difference? The guys who skip the extra work are the guys who wash out of the NFL in three years.

So yeah: Even the top guys needs a little external motivation now and then. “I try to create a concept from their viewpoint,” Winkelman says. He’ll walk guys through a specific line of questioning, using pointed statements, to help them see how each small choice can benefit them.

Likewise, the average guy might be motivated to lose weight and gain some muscle. But rather than just trying to attain a six-pack, break the concept down into smaller goals, like getting to the gym three days a week for a certain number of weeks. When you can’t find the drive on a particular day, ask yourself questions like: “Will skipping this workout help me or hurt me?” You know the answer already, but having to admit it will help you refocus on the smaller goal you need to achieve on your way to the larger goal.

The type of training the prospects do at EXOS is different from on-field football work. They’re trained as sprinters to get faster times in tests that they’ll take at the combine. Some guys get bogged down by the logistics of the program, but overall the staff at EXOS doesn’t have to do too much to keep them motivated.

“I’m not a big fan of hooting and hollering,” says Winkelman. “I will let them know when they’ve done something great, but I will not come down on them hard when they’ve done something wrong.” That positive reinforcement helps the athletes focus on things they can change, rather than waste time and energy being upset. In your own training, reframe the way you think about success and failure. Instead of beating yourself up about missing a lift, think about the things you’ve done well. You don’t need to endure a death march on the treadmill to make progress—so give yourself credit for getting into the gym on a tough night when you’re tired and sore! ­ From there, build on those things. Simply thinking in a different way will help you realize how effective positive reinforcement can be.

3. UNDERSTAND WHEN YOU’LL GET TIRED

In one test, the prospects will run three sprints. “As we train them over the time, their best sprint should be #1. The second sprint should be the same or 5% slower, and #3 should be 5-10% slower, if they’re giving 100% effort,” says Winkelman. That means it’s normal to expect your production to drop off, slightly, when you’re giving maximum effort for a certain amount of time. (The only guy who didn’t? Julio Jones, who went from being a freak of nature at Alabama to a freak of nature with the Atlanta Falcons.)

So unless you’re Julio Jones, when you fall a little short, try to understand why it’s happening. Just beacuse you’re not constantly setting personal bests at the gym doesn’t mean you’re not making progress. And remember: Working out tough is hard, and it should be that way! If you’re feeling tired, make sure you recover correctly, and then understand why you’re feeling a little more run-down than normal.

4. WORK ON YOUR WORK ETHIC

For Winkelman, who has been with EXOS for years, there’s one single characteristic that he sees in all the guys who train at his facility that go on to have successful NFL careers: “Work ethic, 100%,” he says. “The ones who will work without being told, the ones who you have to tell to stop doing extra work, they’re going to be the ones that historically have the best careers.”

That may seem cliché, but it’s true. Lots of top prospects were better than their opponents in high school and college because of their natural ability, or because they were just bigger or stronger than the guys on the other team. But in the NFL, everyone is naturally gifted. It’s the same for you at the gym.

You might have good genetics, and maybe you can still see your abs despite a few weekends of drive-thru and too many beers. But it won’t stay like that forever, and the way you can make sure you succeed at staying fit is continuing to work hard in the gym, and in the kitchen.

That especially applies to nutrition. The pro prospects at EXOS will eat according to their specific needs. Guys looking to lose weight will get most of their calories in breakfast and lunch, and they may not be supplementing with creatine. For those looking to gain weight, safely, without adding a ton of body fat, they’ll take in more calories around their workouts.

For you, decide what you want to achieve before you get to the gym and start warming up, and make sure you’re eating the right way at all your meals. Otherwise, you’ll have a hard time seeing changes in your body.