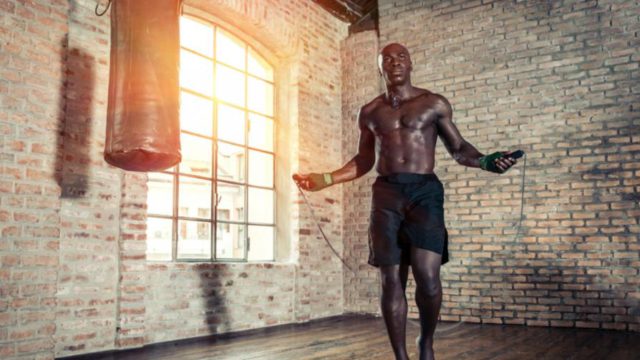 The idea is simple: less total time required to make a big change—more bang for your buck, says Brent C. Ruby, Ph.D., FACSM, Director of the Montana Center for Work Physiology and Exercise Metabolism at the University of Montana. But the perks go far beyond saving time and expediting results—and years of research prove it. So if you’re not already on board with HIIT, read on to get seriously motivated to start.

“HIIT burns more calories during and after a workout than continuous aerobic training,” says exercise physiologist and athletic trainer Scott Weiss, C.S.C.S. “The bursts of increased intensity simply increase the caloric expenditure, thus, more total calories are burned aiding in better body composition.” Even more: You burn more calories for about two hours after exercise, adding to the greater caloric fire, he explains. Exercise post oxygen consumption (EPOC) is the body’s natural ability to return to homeostasis after exercise. “With HIIT, the total calories burned is greater in EPOC than with continuous exercise.”

“HIIT is more enjoyable than low intensity steady-state exercise,” says Tom Holland, MS, CSCS, CISSN, an exercise physiologist. Science backs this up. One study found that people reported much greater enjoyment of HIIT over continuous vigorous-intensity exercise and continuous moderate-intensity exercise. But beyond getting a kick out of your workout, you’ll also be more likely to stick to a workout you love, Holland says.

Next time you’re slogging on a run, pick it up—just for 60 seconds. A study in PLoS ONE found that just one minute of high intensity work on an otherwise not-so-hard workout can boost your endurance and your overall health, seen through measures like improved blood pressure and higher counts of mitochondria, which help fuel your body and brain. And that improved endurance will carry over to your more moderate-intensity runs, rides, and other workouts.

You might not think that one workout can do a whole heck of a lot, but if you’re doing HIIT, it can. In fact, one study of people with type 2 diabetes had subjects either continuously walk (moderate intensity) or interval walk (at low and high intensities) for an hour five times a week for four months. The results: VO2 max increased in the interval-walking group (but no changes were seen in the continuous-walking group). Body mass and fat mass decreased in the interval-walking group only, and they also had better glycemic control. “It can lower glucose levels in diabetics, even a single session,” says Holland.

We know: You already know these workouts are more efficient than any other kind. But, there’s science to back up just how crazy-efficient they are. “You can get the same, if not greater, results in half the time of low-intensity longer duration workout sessions,” says Holland, citing a 2013 study in the Journal of Physiology. That study found that sedentary men who did 40 to 60 minutes of cycling at 65 percent of their max five times a week and those who did sprint interval training for less than 12 minutes each time three times a week saw similar results, including reduced aortic stiffness and increased insulin sensitivity.

A recent study in The Journal of Strength and Conditioning Research found that there’s more to HIIT than sprinting it out. Researchers found that people who did cycling intervals and people who did intervals of moves like burpees saw similar results in terms of VO2 max and heart rate. Even more: Folks in the study rated the burpees as easier than the cycling even though the reaped benefits were similar.

Flexibility isn’t just important when it comes to touching your toes. “HIIT increases the flexibility and elasticity of arteries and veins better than continuous aerobic exercise,” says Weiss. “Because of the increased pressure demand of HIIT, the vessels actually get a workout as well.” One study that looked at people with coronary artery disease found that high intensity interval training was not only safe—but better tolerated than a more moderate level workout.

HOW TO BOOST YOUR BACK SQUAT