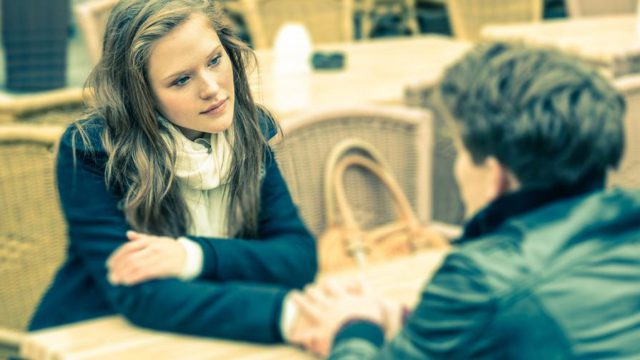 ALL RELATIONSHIPS—LOVERS, PALS, the chick behind the counter at Starbucks—at some point involve conflict. Yet here’s what’s odd: In school, we learned so much—the periodic table, algebra, how to make a baking soda volcano—but never how to argue.

So we carry on like kids: “I’m taking my toys and going home!” It leads to breakups, bruised feelings, ruined friendships.

But there’s a better way: Just ask the NYPD’s Hostage Negotiation Team, which has developed a time-tested framework for dealing with conflict in any crisis. And if it can handle bomb threats and murderers, surely it can handle any dispute you might get into.

So, with guidelines adapted from their model, let’s try turning around this potentially nasty brawl:

Your girlfriend says: “Motherfu—er. Last night was Friday night, but you went out and got drunk without telling me or even answering my texts?!”

What do you do?

1. Start a conversation that relays: “We’re in this together”

The NYPD has a motto: “Talk to me.” The goal: to make your counterpart comfortable enough to open up. It’s also called “active listening”—conversing in a way that says you’re open to hearing another person’s feelings:

2. Don’t rush to end the conflict

Be patient. Slow down. As ex-NYPD hostage negotiator Jeff Thompson cautions: “Avoid hurrying toward a resolution”—it may not be the outcome you want. It’s like sex: If one of you gets off fast, great. But what about the other? So:

You say: “Fair. I get that. Let me try to see this from your perspective…”

She says [surprised]: “I thought we’d hang out, then you went radio silent. After dating a year, that’s shitty.”

“People will tell you their problems if you just listen. Then you can use those insights to frame a solution,” says Stanford’s Margaret Neale, co-author of Getting (More of) What You Want. The best way to prove you’re listening? Paraphrasing back:

You say: “So, what I did was really immature and disrespectful.”

Or, as the NYPD puts it, “Show respect.” This manages the current crisis and preserves the relationship. “Most disputes are with people you know and will see again,” says Neale,” so respect is critical.” Try:

You say: “I guess I’d feel the same if the tables were turned.”

She says: “It was pretty damn rude…”

5. Chill—even if you’re faking it

It’s easy to lash out to “win” a fight even if it would be counterproductive. But stay calm and you’ll have no ugly words to regret later.

You say [after a deep breath]: “I know it looks that way. Can I tell you what happened, from my perspective?”

“Be honest about your own interests,” not just the surface argument, says Jeanne Brett, of the Kellogg School of Management at Northwestern University. If not, how can you ask anyone to be honest about theirs?

You say: “So, Ty asked me to happy hour, and since we hadn’t made plans, I went—$2 shots!—and I didn’t check my phone. But you’re saying that, at this point with us, we should have almost a default understanding that we hang out on Fridays. Right?”

7. Above all, be flexible

Brett gives the example of two sisters cooking dinner, who start fighting over the one orange they have—half isn’t enough for either of their recipes. No dinner gets made. But if they’d talked, they’d have learned that one needed the juice for a sauce, and the other needed the peel for a cake. The moral: Be adaptable.

You say: “And that doesn’t mean that we always hang out on Friday…”

You say: “But we keep each other in the loop. I’m down with that. OK?

How to resolve conflict with obnoxious co-workers

Conflict tactics can even work with obnoxious co-workers:

He says: “Dude, hurry up with that report—I need it, like, yesterday.”

You say: “You’re right, we should figure this out.” [We’re in this together.] “And I hear you.” [Listening] “I want this off my plate, too.” [Admit your motivation.] “But the vendor is holding us both up, so it’s gonna take longer than usual. Tomorrow work?” [Flexibility, convey that your interests are surprisingly aligned.]

19 foods that will slim you down to 7% body fat