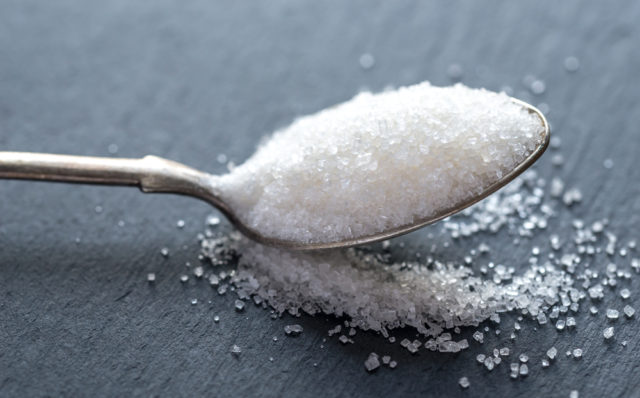 Americans eat an average of 17 teaspoons of sugar a day, which adds up to 57 pounds per year. Considering that the 2015-2020 Dietary Guidelines for Americans. recommends no more than about 200 calories (about 12 teaspoons) of sugar per day, that’s a concerning amount.

Whether or not you’re a sweets person, there’s no denying that sugar can add pounds to your frame without any nutritional value—but it’s hard for many to keep away from it. It’s in everything from yogurt to sports drinks, protein bars, and more.

To learn more about this delectable substance, we pulled together some sweet (and some not-so-sweet) facts about this tasty ingredient.

Sugarcane was first domesticated thousands of years ago on the island of New Guinea. Used as an elixir, sugarcane became a “cure” for ailments—like headaches, stomach flutters, and impotence—when it was processed into a powder in India in 500 A.D  Today, sugar has been known to help cure hiccups, clean dirty hands, stand in for lighter fluid, and cool a burning tongue.

Eating an excess amount of sugar can increase triglyceride levels, which may increase your risk of heart disease. Sugar is also an inflammatory, so eating too much may contribute to obesity and diabetes.

If you’re going to indulge in the sweet stuff, be prepared to put in some serious legwork to burn it off. Fifty minutes of running or five miles of walking is about what it takes to burn the 250 calories and 16 tablespoons of sugar found in a 20-ounce bottle of soda, according to a 2014 study by John Hopkins University.

Ups Your Odds for the Big One

Sometimes the sweetest things can be so deadly. A 20-year study of 40,000 menrevealed that those who averaged one can of a sugary beverage per day had a 20 percent higher risk of having a heart attack or dying from one than men who rarely consumed sugary drinks.

Is it part of the original sports drink? Sugar waterwas shown to be just as—and sometimes more—effective for endurance. athletes than a sports drink, according to a study published in the American Journal of Physiology.

Just because it says “sugar-free” doesn’t mean it’s actually the real deal. A “sugar-free” foodmust contain less than 0.5 grams of sugar per serving, according to the Food and Drug Administration.

Sugar substitutes are sweeteners that you can use instead of the real thing (sucrose). These fake sugars, or artificial sweeteners, come in many forms. Saccharin, acesulfame, aspartame, and neotame are some common ones. Another popular substitute, sucralose(aka Splenda), was originally discovered by accident in 1976 by scientists who were actually trying to create an insecticide.

It’s in Your Genes

Maybe that sweet tooth is in your DNA. Researchers have found two receptor genes that can predict a preference for sweets. But overall, the study concluded that many other variables, including including genetics, cultural beliefs, age, and personal experiences, also affect the way we’re drawn to sweets.

UNLOCK YOUR POTENTIAL: HOW TO BOOST YOUR HGH LEVELS