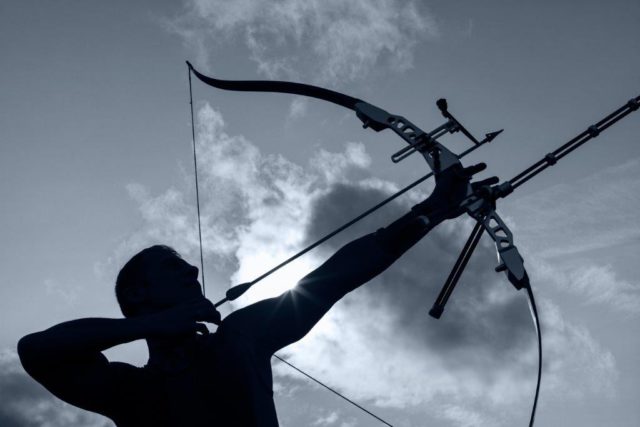 It started with John Rambo and later with the Lord of the Rings movie trilogy, when the characters of Rambo and Legolas fought off the enemy with a bow and arrow, then The Hunger Games star Katniss Everdeen and Hawkeye from the Avengers franchise sparked a renewed public interest in the sport.

Without a doubt, the popularity of archery saw tremendous growth thanks to the success of these movie blockbusters. Families were suddenly taking archery lessons, as parents encouraged their children to try a new sport and be just like their favorite cinematic hero.

And while some may see archery as a fun hobby, there is much more to it than meets the eye. Records trace the first bow and arrow back as far as 50,000 BC. It was traditionally used for hunting, but is now a popular sporting contest, and it’s even a competitive Olympic sport. Though often perceived as a stationary sport, competitive archers require a significant amount of strength, endurance and focus to perform well, making it an ideal sport to help keep you healthy and fit.

Once you get into archery, you’re going to hear people throwing out terms such as “Olympic,” “traditional,” “3-D archery,” etc.

They’re talking about the different styles of archery. And if you’re going to get into the game, you’ve got to know your style.

In basic terms, here are the six styles of archery: 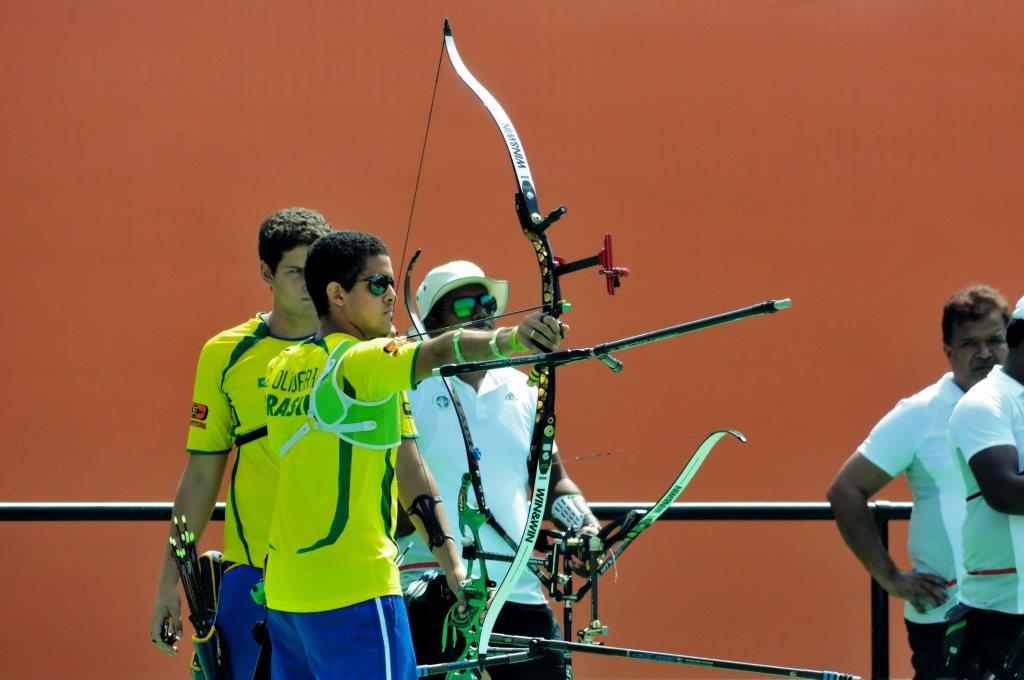 As you might have guessed, this style of archery is so named because it’s what you see at the Olympic Games. We’re talking about target recurve bows that have rests, plungers, stabilizers and sights attached. (There’s talk that compound bows might someday be allowed in the Olympics, but currently, they are not.)

Competitors typically shoot from 18-90 meters, which is about the length of a rugby field. All Olympic recurve bows are going to be take down bows. That means the limbs can be removed from the riser. 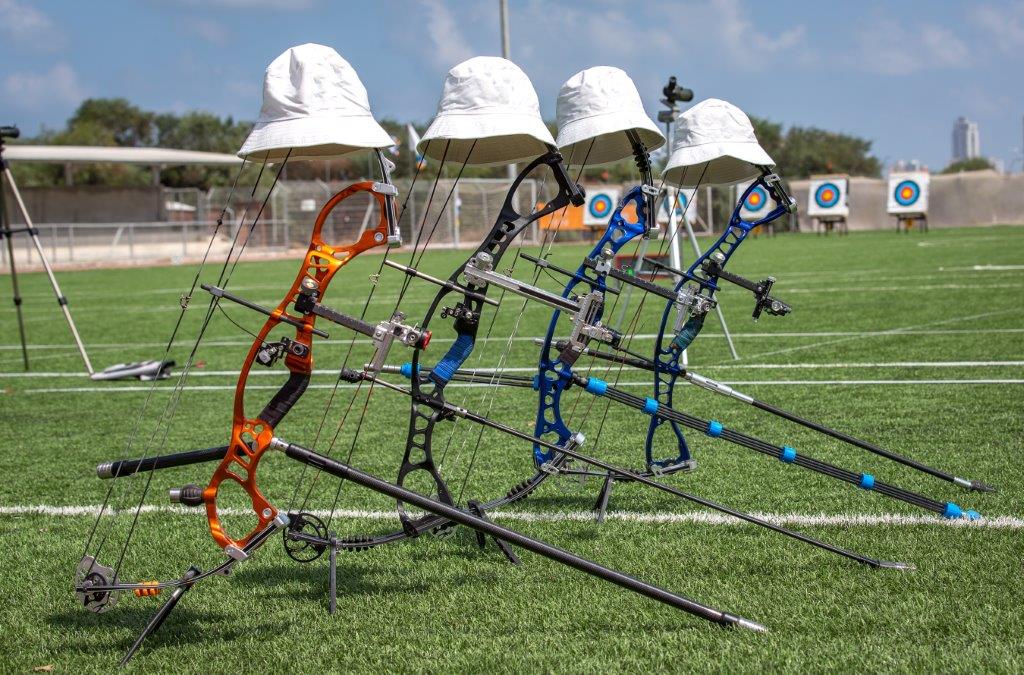 This is a precision-shooting style practiced primarily by compound bow shooters who participate in tournament competitions. They primarily shoot at paper target faces that range in sizes of 20cm to 122cm. The tournaments might be indoors, or they might be outdoors. Target compounds tend to be long – 36-40 inches from axle to axle is common – and they usually have brace heights anywhere from 7-9 inches. Both qualities make these bows very forgiving and friendly in an archer’s hands. Arrows are built solely with stability and accuracy in mind. Indoor arrows tend to have a large diameter and they’re heavy, while outdoor arrows have a smaller diameter and are aerodynamic, for cutting through the wind at long range. Compound target archers use stabilizers of all lengths, and their sights often feature scopes with magnifying lenses. Tournament classifications dictate what equipment is allowed for some archers. 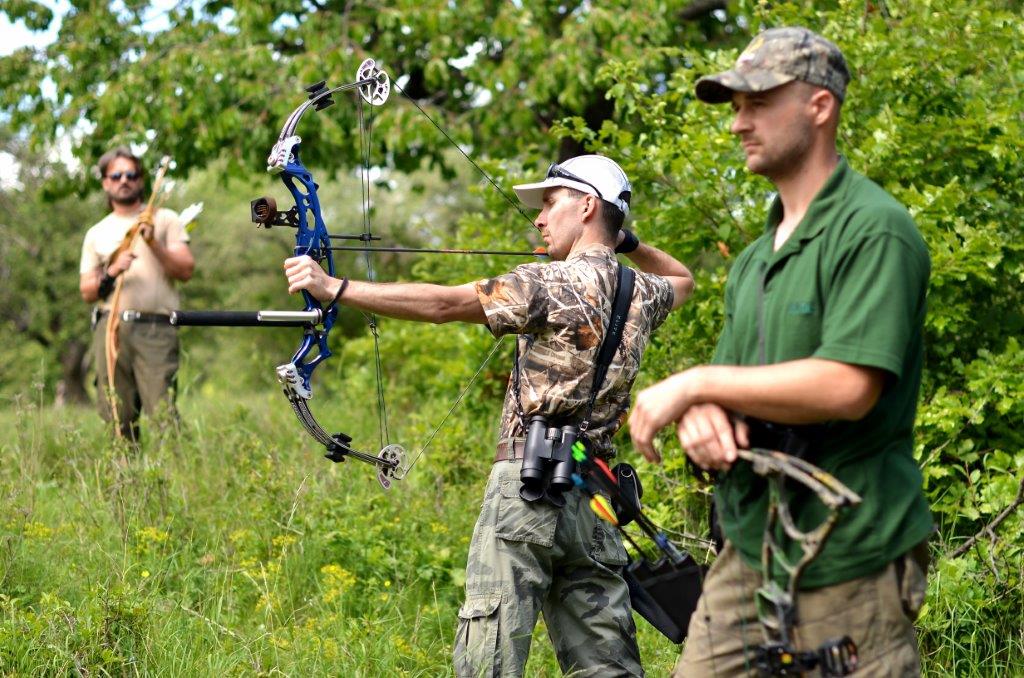 In 3-D archery, archers shoot at 3-dimensional, foam animal targets. The targets are placed at various distances from the shooting stake, which means archers must shoot at ever-changing yardages over the course of a shoot. Sometimes the distances are marked, but often, the archers have to judge the yardages for themselves. Archers shoot every kind of bow in 3-D archery, so you’re just as likely to see someone shooting a target compound as you are a traditional longbow on the 3-D range. Arrow speed is an important consideration for 3-D archers, since faster arrows can make up for errors in judging distances. 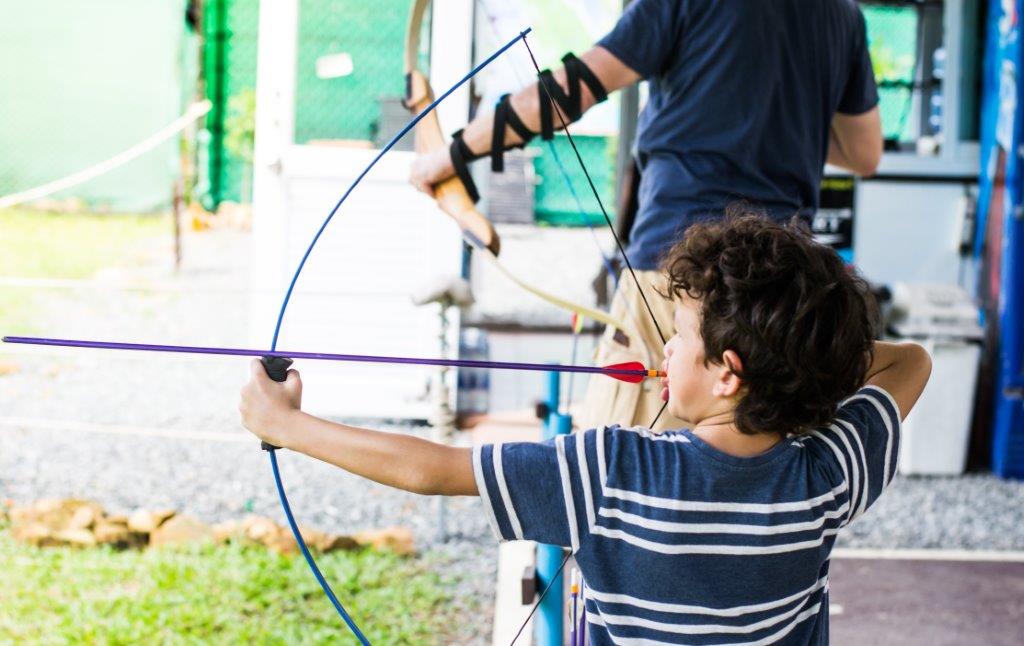 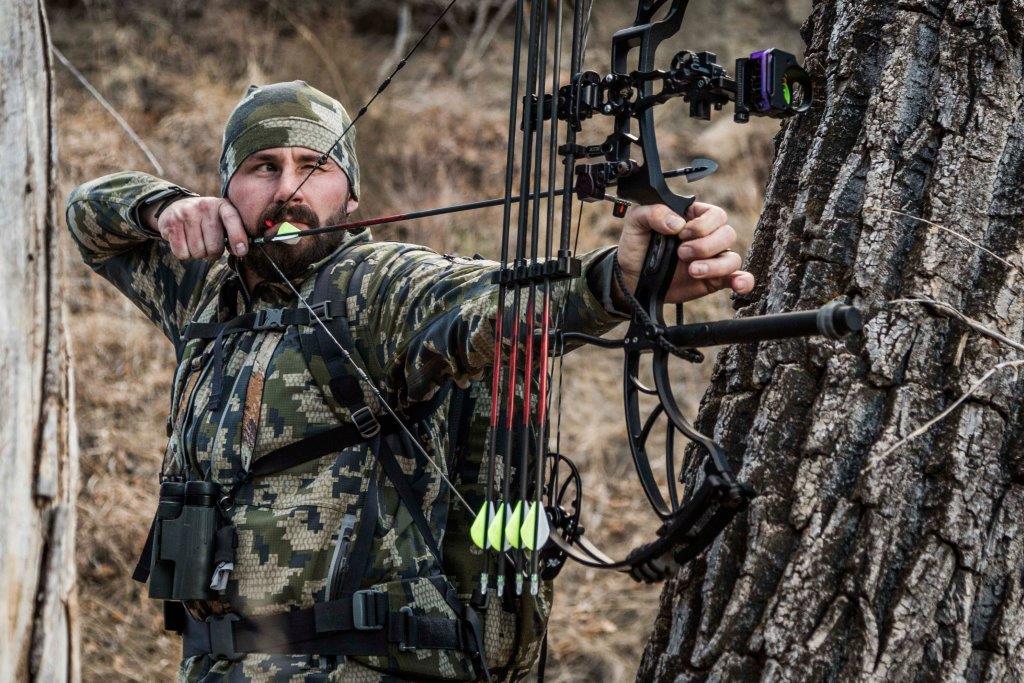 Bow hunters use compounds, recurves, longbows and crossbows, all with the goal of taking game. Their gear is going to be camouflaged or of neutral color, as compared to the shiny, bright-colored equipment used by target archers. Bow hunting equipment also tends to be beefier than target gear. Bow hunters must be concerned about their arrows punching through thick skin, fur and bone, so their bows tend to have heavier draw weights and their arrows generally weigh more than those used in target archery. In bow hunting, you’ll see bow-mounted arrow quivers, along with various pieces of gear attached to the string and/or limbs aimed at making the bow quieter. Stabilizers and sights tend to be short, compact and sturdy for carrying long distances, often through thick cover. 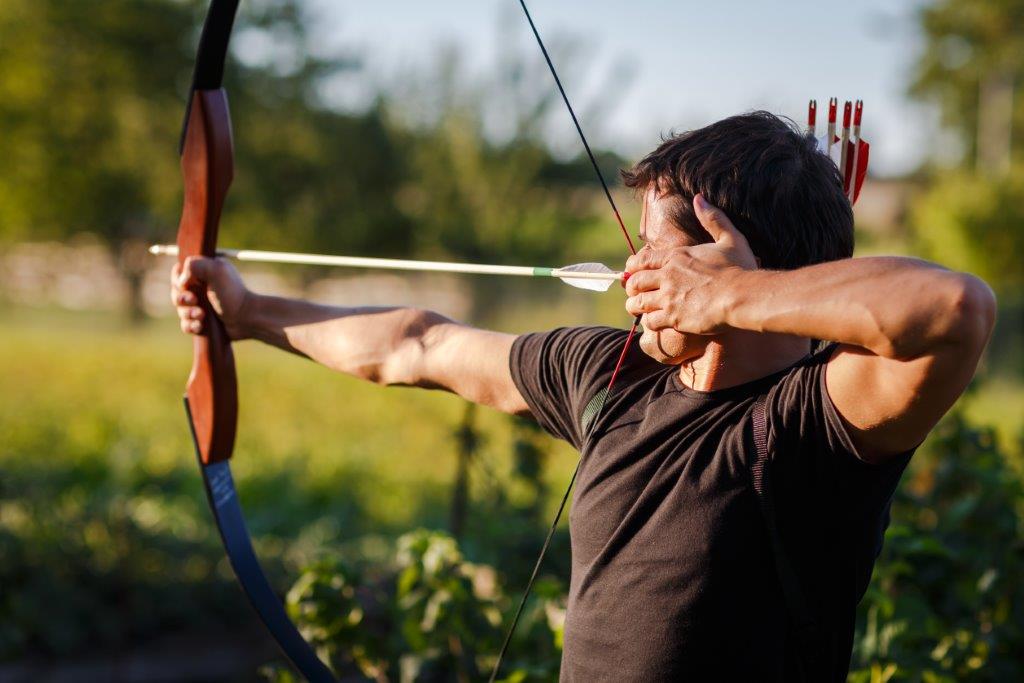 Traditional archers lean toward the equipment that imitates what was used long before the modern era. They shoot recurve and longbows at all types of targets, including stumps. Many of the recurves are going to be one-piece bows, but take downs also are acceptable. What separates traditional archery from Olympic recurve is the bows are stripped down. Sights generally aren’t used at all, and stabilizers, if used, are short and simple. Rests and plungers are used by some traditional archers, although many shoot their arrows right off the shelf of the bow.

Traditional archers usually are the only archers who shoot wooden arrows, although they also shoot carbon and aluminium shafts as well.

As with any new sport and hobby, there are some tips that will help. 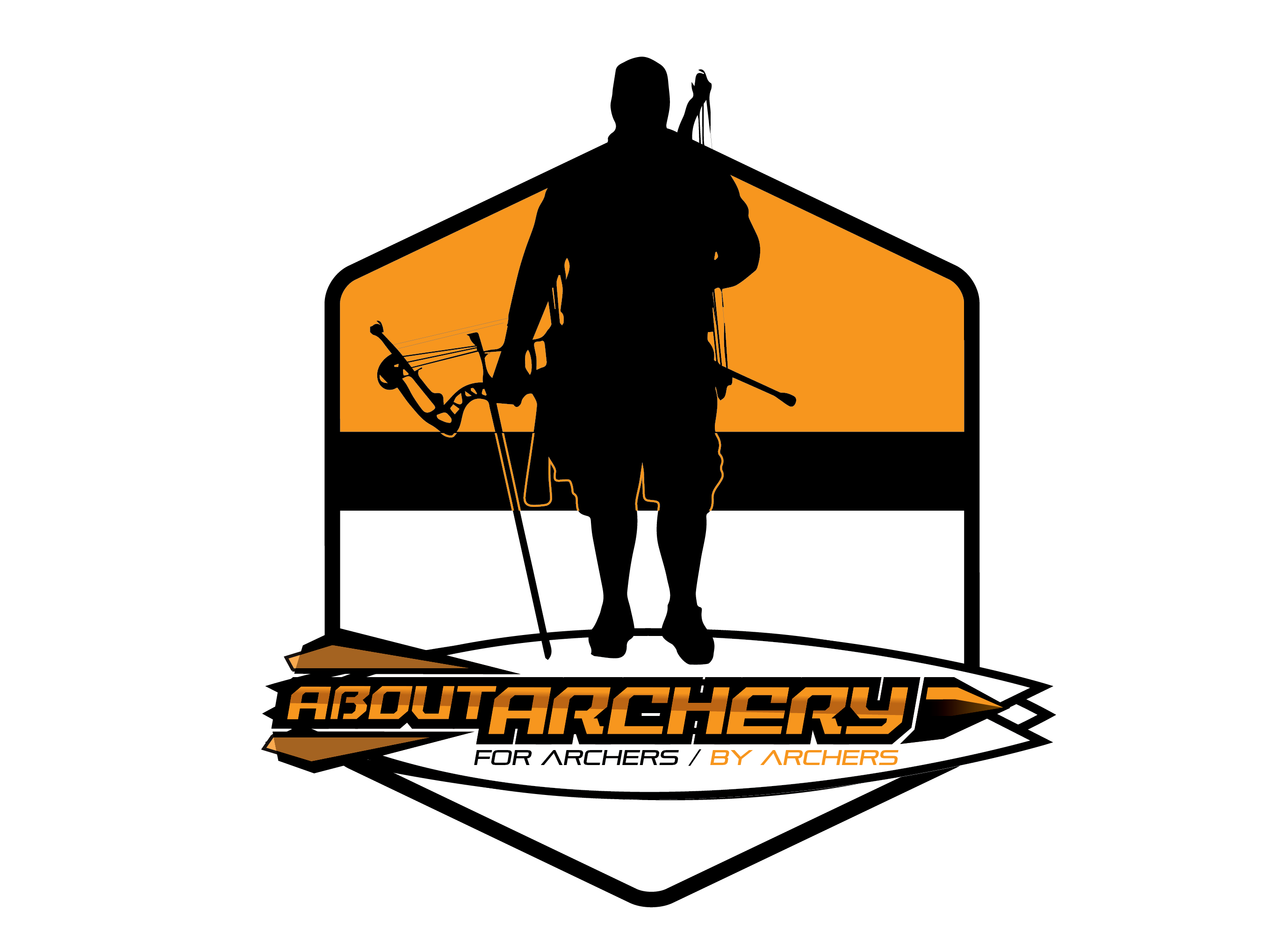 Speak to a local club or get additional information on archery at aboutarchery.com. About Archery will also have open days and training days where they will teach and showcase the different styles and options available.

Go to your nearest archery store or visit magnumarchery.co.za to see which options and gear is available to you. Magnum Archery is owned and run by Seppie Cilliers. Seppie has an extensive knowledge on any archery inquiry you might have. Facilitating all Magnum Archery Academy courses, you are sure to learn something from him.

The best biceps workout in under 10 minutes

What’s the difference between HIIT and Tabata?

THE BEST WINES FOR BODYBUILDERS