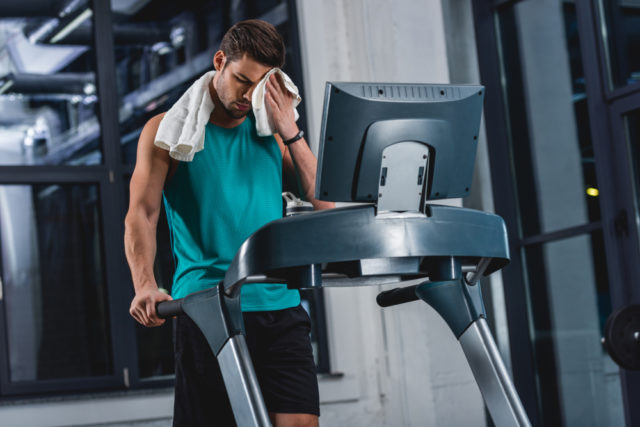 You’ve probably read about fasted cardio a million times on the internet and within the pages of this magazine. That’s largely because the vast majority of the leanest physique athletes swear by the practice, as do those who have lost large amounts of weight. Without flipping through a single research journal, it makes sense, right? In the absence of food to use as fuel, the body must go on the hunt for alternative sources—in this case, body fat—during the workout and subsequent recovery. But does the anecdotal evidence that fasted cardio works hold up to the available science?

Let’s dig in.
WHAT IT IS

Fasted cardio is the practice of performing cardio—usually at a lower intensity on a bike or a treadmill—on an empty stomach, first thing in the morning.

A 2014 study in the Journal of the International Society of Sports Nutrition compared fat-loss results between two groups of hard-training athletes, one of which was fed beforehand while the other trained on an empty stomach. There was no difference in fat loss between the two groups. What’s more, a 2011 study found that a light pre-workout meal was actually preferable to fasted cardio for greater lipid (aka fat) utilization. Go figure.

Your diet is what dictates fat loss. But if you want to do fasted cardio anyway, trainer Justin Grinnell, C.S.C.S. (grinnelltraining.com), suggests taking in five to 10 grams of branched-chain amino acids or essential amino acids with three to five grams of creatine or even 20 to 30 grams of quality whey protein. “It acts as a safeguard,” Grinnell says. “You limit calories but provide a buffer between meals to make sure muscle mass is not lost and blood sugar levels are sustained for optimal energy and performance.”

Sets every minute on the minute to build more muscle

How to create a healthy diet plan