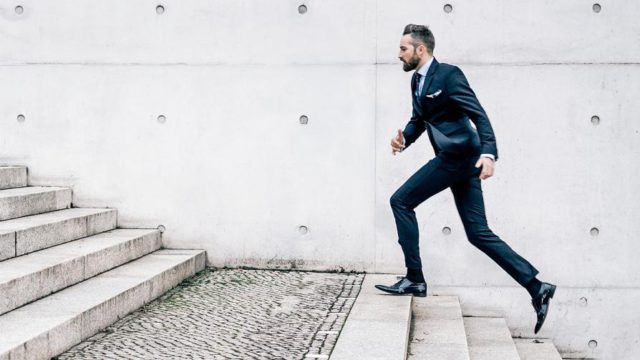 WORKERS AROUND THE world run on the early morning jolt they get from various caffeinated beverages, from iced tea and energy drinks to coffee and chai tea. But what if there were a way to get your morning energy infusion that provides a bigger boost, plus helps keep you healthy?

Researchers from the University of Georgia may have found the perfect solution, but don’t get too excited—it’s not some magic herb you can eat before work, or a pill to pop when you need some extra energy—it requires you to walk some stairs and work up a sweat. Though not the ideal solution for office drones, the study re-enforces the notion that exercise can actually help increase your energy, instead of sap it like some people contend.

In the small study, which was conducted on 18 college students, the scientists found that 10 minutes of walking up and down stairs at a moderate pace was more effective at energizing the participants than taking 50mg of caffeine, about what you’d get in half a cup of coffee or 12oz of soda.

“We found, in both the caffeine and the placebo conditions, that there was not much change in how they felt,” said study co-author Patrick J. O’Connor, Ph.D, a professor in the department of kinesiology at UGA. “But with exercise they did feel more energetic and vigorous. It was a temporary feeling, felt immediately after the exercise, but with the 50 milligrams of caffeine, we didn’t get as big an effect.”

So for you office workers stuck in a building, try taking to the stairs for a few minutes each day when you start to feel sluggish around mid-afternoon. It could be a great way to get some exercise, clear your head, and boost energy.

Change your attitude toward working out, and it can seem easier

7 things guys with six-packs do every day