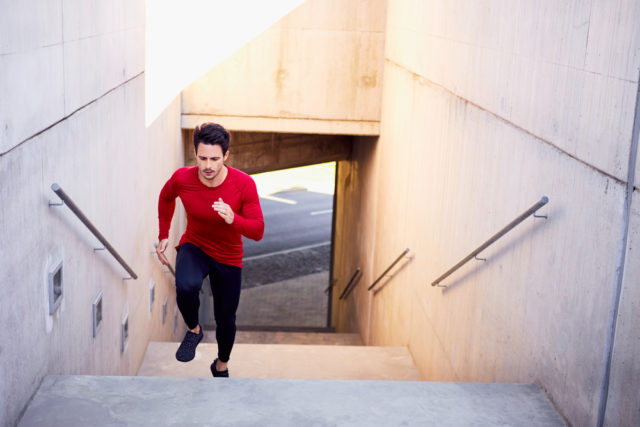 Many athletes and bodybuilders swear by high-intensity interval training (HIIT) for building lean muscle and dropping body fat, and they may be on to something, according to new research from the Mayo Clinic. In a recent study, cardiac rehabilitation patients who stuck to a HIIT regimen lost more abdominal fat, lost more, overall body fat, and gained more muscle mass than those who did moderate-intensity, steady-state training.

Researchers had 120 patients do moderate-intensity training for one week, then 90 of them switched to 20-minute HIIT workouts for the remainder of the 12-week study. The HIIT group’s workouts consisted of four to eight, one-minute high-intensity intervals with three to five minutes of rest in-between, while the steady-state group did 30 minutes of moderate exercise per session. Over the course of the study, both groups did three sessions per week.

Both the HIIT and steady-state groups included patients with an average age of 67, and the groups were similar in terms of gender, BMI, medications, and illnesses. At the end of the study, patients on the HIIT regimen had lost an average of nearly four more pounds of body fat than those doing moderate-intensity workouts. The HITT subject also gained one and a half pounds more lean muscle and dropped about an additional inch from their waistlines. There wasn’t a significant difference in weight lost or BMI, but we don’t need to tell you that the numbers on the scale and BMI measurements aren’t everything.

You may be thrilled to hear that HIIT could be the more efficient way to drop stubborn belly fat and gain lean muscle before summer, but these latest findings also hold significance for heart attack patients  those at risk of a heart attack. Carrying more body fat—abdominal fat, in particular—is associated with a higher risk of developing heart problems, according to the study.

“A considerable amount of research on HIIT has been done in athletes to demonstrate its ability to improve total exercise capacity and sports performance,” said lead study author Yaoshan Dun, MD, PhD, a cardiac rehabilitation specialist at Mayo Clinic and Xiangya Hospital of Central South University in Changsha, China, in the release. “Scientists and clinicians are just beginning to recognize the power that HIIT may have in clinical populations to prevent a second heart attack in patients who’ve already had one.”

When it comes down to it, any form of exercise is better than none at all. But whether you’re an athlete looking to take your fitness level up a notch or you just want to improve your cardiovascular health, you may want to consider sprinkling a few HIIT workouts into your routine.