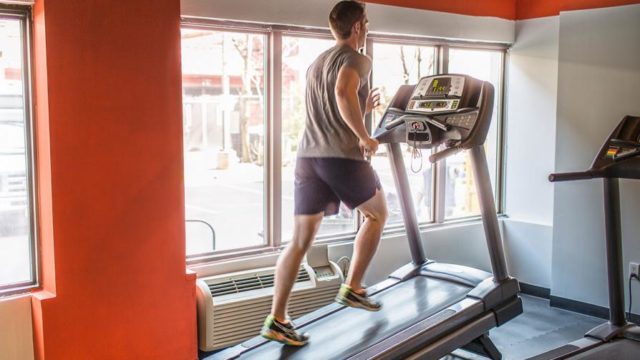 WHEN RAMPING UP your running regimen with some tough speed work, it can be tempting to stand still or jog slowly with sloppy form between intervals. To get the most benefit from those sprints, however, you need to go after the easy sections of a run with just as much care. “Research clearly shows that an active recovery is better,” says Bobby McGee, a former Olympic coach and author of Magical Running. Here’s how to tackle the downtime of any speed workout—and reap even greater results.

Even if you swear you hit Usain Bolt velocity, recovery time between intervals shouldn’t extend several minutes. But there’s good news: It’s OK to walk—or even just stand—if you’re too wiped out to keep up a jog. “The focus should be on maximizing the short respite you get from hard running to be as optimally recovered for the next repeat as possible,” says Melanie Schorr, M.D., a running coach at RunnersConnect in Boston. “But if you’re only able to walk or jog, that’s optimal to keep your blood flowing and help oxygen get to your muscles faster to keep them loose.”

As much as you dread heading uphill, retracing your steps can be a real pain. “The hardest function for a muscle to perform is an eccentric contraction, when the muscle is lengthening while contracting,” says McGee. This effect occurs during downhill running. To minimize quad fatigue and get ready to crank out another rep to the top, Schorr recommends walking back down the hill or jogging so slowly that it feels almost as though you’re falling. The decreased speed along with proper form (think lowering your hips, taking shorter steps, and striking the ground with the full foot rather than the heel) will be gentler on joints, too. But keep in mind: If you’re training for the Boston Marathon or another hilly course, it’s better to pick up the pace on the decline to prep quads for the beating they’ll get on race day.

Get excited, because anything goes during a fartlek workout—the name itself means “speed play” in Swedish. It’s a relaxed, slow run with faster sections (of whatever distance and pace you want) mixed in. In fact, not lowering the pace enough for the easy parts can be a problem if you’re not letting your legs get ready to run fast again. Between fartlek intervals, Schorr suggests dropping the speed enough so you can breathe deeply and get fully rested before bringing it up again. And McGee says to simply spend the time thinking about “recovering for the next section, what your effort or pace is going to be, keeping an ease of motion—and how kick-ass you are.”

Ready to run faster or longer? Go for a tempo run: It includes at least 15-20 minutes at lactate-threshold pace (about 30 seconds slower than your 5K pace), with an easy jog before and after. With the focus on the harder middle section of the run, you might want to cut the warm-up or cool down short. Doing that, though, is a recipe for muscle strains or tendonitis, as you’re less limber and your joints and tendons aren’t lubricated. McGee advises “priming” during the warm-up: After some slow jogging, do a few strides, then build up to target tempo pace for about five minutes. The cool down is less important, but make sure to jog slowly for at least 10 minutes to allow blood to circulate back to the heart and reduce soreness later. Just be sure not too cool down for too long and overdo it—relax, you’ve already finished the hard part.

ARMY OF TWO: HOW TO CHOOSE A TRAINING PARTNER

CAN YOU DATE YOUR PERSONAL TRAINER? PLUS 4 OTHER FAQ’S